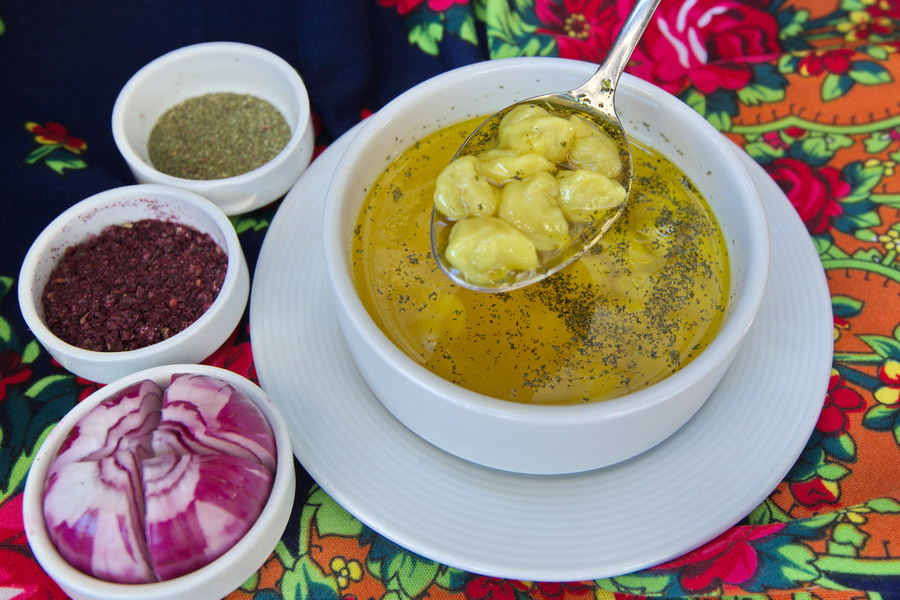 Soup lovers will rejoice - Azerbaijan is a land that appreciates a good soup. There are all sorts of soups available, from meat broth soups to soups made from sour milk and greens. Azerbaijani soups can make a great starter, a light meal during any weather, or a meal on their own. This great variety means that you can spend your whole trip exploring just the soups in Azerbaijani cuisine, without ever getting bored.

Mutton soup with peas, potatoes, tomatoes, mutton, fat and spices. Each serving of piti is cooked in a separate clay dish, called a pitishnitsa. 15 minutes before serving, mutton fat is added to the soup, and piti is served with saffron and finely-ground mint. Piti is usually served with the soup in the clay jar as well as a separate plate or bowl, and the liquid is poured from the rest of the soup and often eaten separately. Try the most traditional piti in Sheki, where many restaurants have made a name as the best Azerbaijani piti.

Soup from mutton bones served with chickpeas, potatoes, spices, and large meatballs made from mutton, rice and dried fruit. The spices include pepper, saffron, and salt, and then Kyufta-Bozbash is garnished with fresh coriander (and dried mint in the winter).

Dyushbara are Azerbaijani dumplings, served in soup. Unleavened dough is rolled to be a millimeter thick, and then cut into small squares. The squares are filled with ground meat, usually about 2-3 grams per square, and then folded into little triangular pouches (similar in size and shape to Turkish manti). A broth is made from mutton bones, and then onion and spices are added to the broth. The dumplings are cooked for 5 minutes in the broth, and then served with coriander and dried mint, with a separate serving of white wine vinegar infused with garlic.

Sulu khingal features thinly-sliced wide noodles and chickpeas boiled in a mutton broth. When sulu khingal is ready to be served, fried onions and chopped greens are added, and the soup is seasoned with dried mint. Vinegar is served on the side. 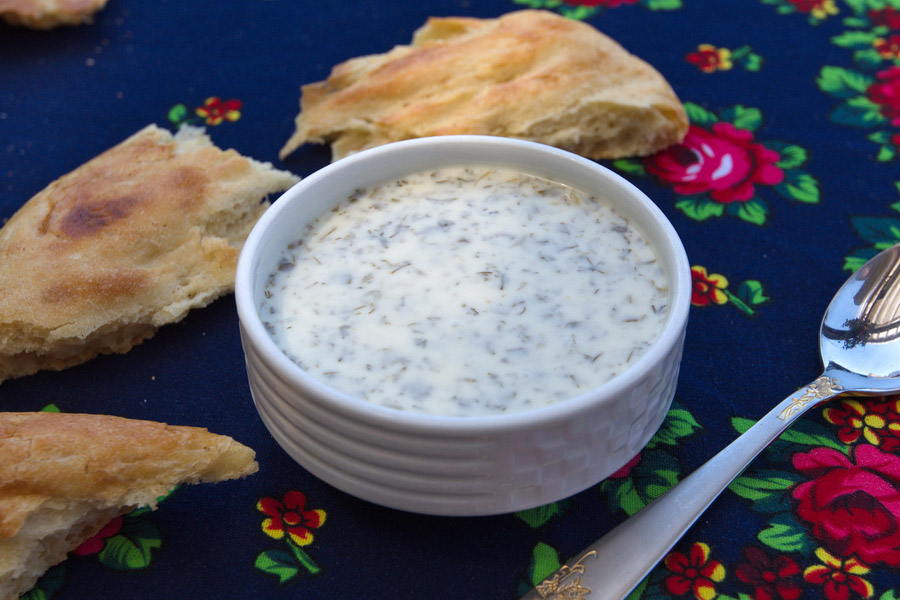 Dovga is a soup made from yogurt with added rice and greens. The rice is cooked, and then egg, yogurt and water are added and brought to a boil. Then the soup is stirred for 20-30 minutes, to give it a fine texture, and right at the end, salt and chopped greens are added. Azerbaijani dovga can be cooked with or without meat, making it a good vegetarian option.

Thin, homemade noodles are the centerpiece of khamrashi. These noodles are made from thin unleavened dough, and finely sliced to make arishta, as the noodles are called. The noodles are then cooked in a mutton broth, sometimes with beans added too, and garnished with chopped greens and dried mint when served.

Start with some eggs, mixed with a bit of salty water, and then poured or sprayed into flour to make little doughy drops. Then onion, tomato, spices and broth are cooked in a pot, to which the doughy egg drops are slowly added and stirred constantly until cooked. A little saffron and dried mint are added right before serving.