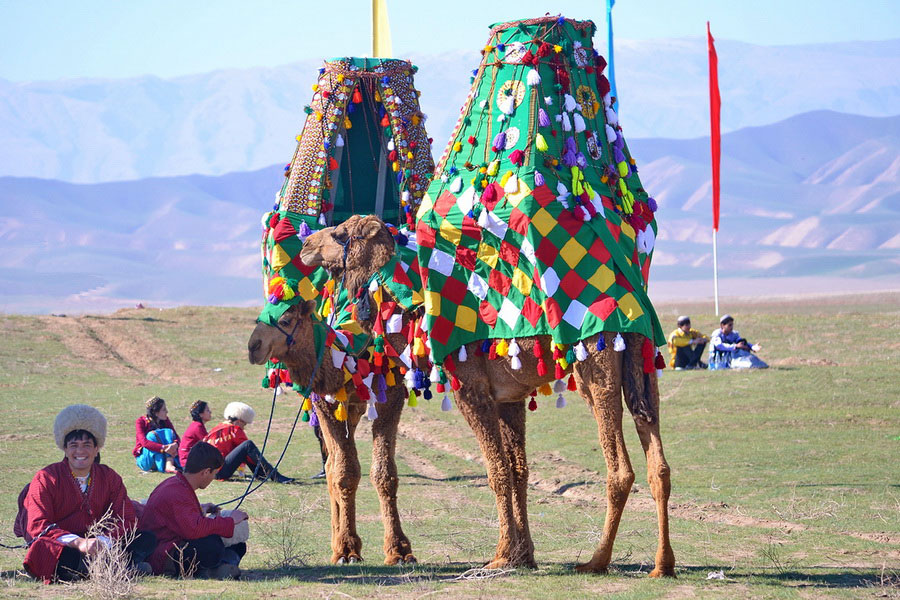 Silk Road… What do we know about it? Our imagination pictures the boundless sandy sea of scorched desert. Cutting through waves of dunes move the never-ending caravans loaded with the valuable goods …

But, of course, it is only true to a certain point. The Silk Road stretched for thousands kilometers leading caravans across scorching deserts, picturesque oases, and mountain passes.  The cities and entire civilizations prospered and decayed along the way. The cities of the Silk Road witnessed numerous devastating wars, destructions, fires, famine and death. For centuries multilingual Oriental markets buzzed, for hundreds of years the dusty caravan roads were traveled by merchants who carried to Europeans precious silks and stones, spices and dyes, gold and silver, exotic birds and animals.

So, one can call the Silk Road the grandiose trade route which connected the East and the West and became the reason of appearance of many unique cities, historical monuments, customs and even the entire states.

What is the story of that surprising route which later became the reason of cultural enrichment of both the West and the East? Let us address the fascinating history of the Silk Road.

Countries on the Silk Road

The Silk Road travel destination that you can explore with Advantour include the following countres, majority of which became availabe for tourists after fall of the iron curtain in 1989:

Routes of the Silk Road

The Silk Road was never a single-path route. Its system included some branches of caravan roads which passed across different mountain passes bypassing deserts.

The Silk Road originated in Chang’an, the ancient capital of China, and went along the northern Tien-Shan to Dunhua, the city near the Great Wall of China. There the single road split bordering the Taklamakan desert from the north and the south. The northern way went through Turfan to the Ili river valley. The Middle road (the so-called Southern way) led from Zhang Qian to the southern coast of Lake Issyk Kul- via Khotan and Yarkand, and reached Bactria (northern Afghanistan). There the Southern route split in two other roads: one followed to India, the other to the West and Merv where it merged with the Northern route. Further it passed via Nisa, the capital Parthia, Iran, Mesopotamia, Bagdad, went to Damascus and reached the Mediterranean. More about routes of The Silk Road.

History of the Silk Road

The start of the Silk Road is dated 2nd century BC when Chinese ambassador Zhang Qian visited the countries of Central Asia with diplomatic mission. Until the 2nd century BC the way from Europe to Asia stopped at the borders of China because the great ranges of Asia, the Tien Shan, the Kun-Lun, the Karakorum, the Hindu Kush, and the Himalayas, protected the ancient Chinese civilization from the rest of the world. It was by accident that the richest western direction was opened.

Goods of the Silk Road

The goods carried on the Silk Road moved basically from the East to the West. Judging by the road’s name silk was the main commodity in the list. Thanks to its light weight, compactness, enormous demand and high price it was ideal for trade and long-distance transportation.

In the Middle Ages the Venetian merchant Marco Polo named the caravan routes silk roads. But it was a German researcher Ferdinand Richthofen who coined the term the Great Silk Road in his fundamental work, “China”, in1877. More about goods of the Silk Road.

More about the Silk Road