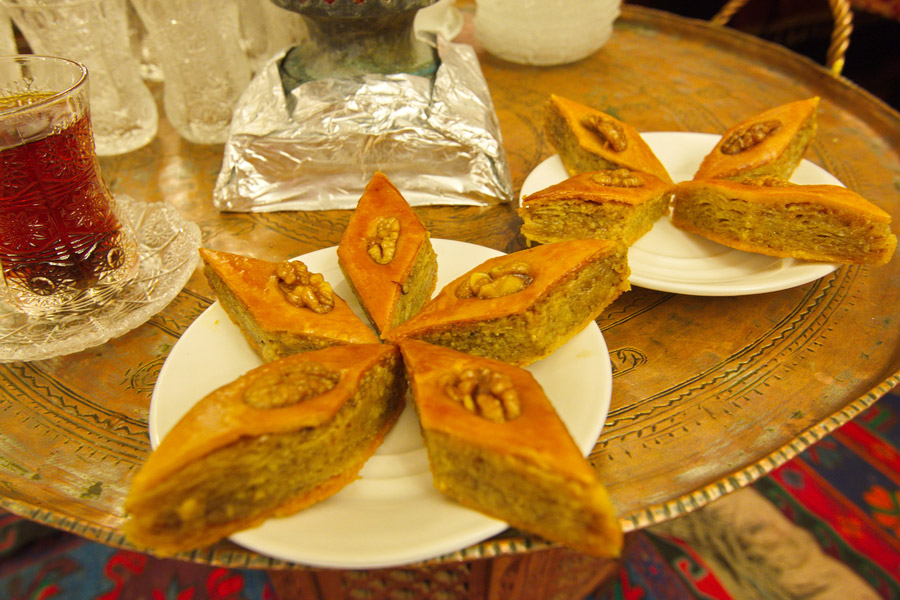 Most traditional Azerbaijani sweets are most popular for events and festivals, whereas fresh fruits are served as a sweet course after a meal at home. Many Azerbaijani desserts feature natural ingredients, like honey, nuts, and fresh dough, to make intense flavors without overloading on sweetness. Like many other dishes in Azerbaijani cuisine, desserts can vary from region to region, with some regions specializing in certain desserts.

Pakhlava, or baklava, as it’s known internationally, is a rich dessert made of thin pastry layered with honey and chopped nuts. Most commonly served on Nowruz in March, pakhlava has a distinctive diamond shape, which symbolizes fire (called pakhla in Azerbaijani, and a prominent feature in many carpets). Make sure to try the pakhlava in Sheki and Quba, two cities famous for their sweets. 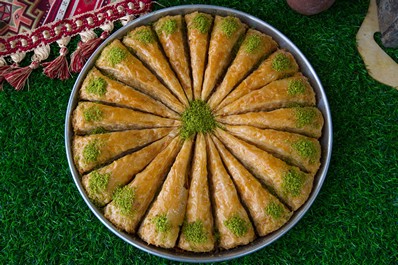 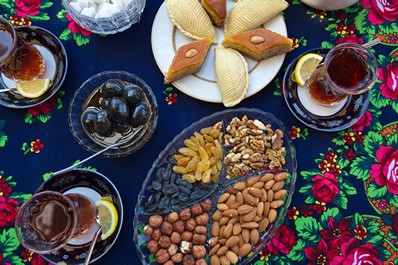 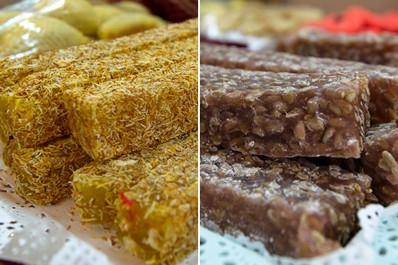 This pastry features a filling of sweet almonds or nuts, mixed with sugar and cardamom and wrapped in dough. The dough is then pinched shut with an intricate design, and the outside is decorated with special tweezers. The slightly crescent shape symbolizes the moon. Like pakhlava, shekerbura is often made for the Nowruz holidays in March.

Shor-gogal is a round yellow bun, filled with fennel and anise seeds, and seasoned with turmeric, salt, and pepper. Though they’re more savory than sweet, shor-gogal are cooked for Nowruz alongside shekerbura and pakhlava, since their round shape symbolizes the sun. The dough for shor-gogal is thin and flaky, and is often made with 9-12 layers, though common wisdom says that the more layers there are, the more flaky and tasty the bread will be.

Guymag features simple ingredients, like flour, butter, water and cinnamon, but it’s full of calories and a perfect warming treat on a cold day. Guymag is also served to patients after surgery and to mothers who have just given birth.

These cookies are made of butter, sugar, vanilla, and flour, with a little yolk dropped on top before they’re baked. A little powdered sugar on top, and they’re ready to be served.