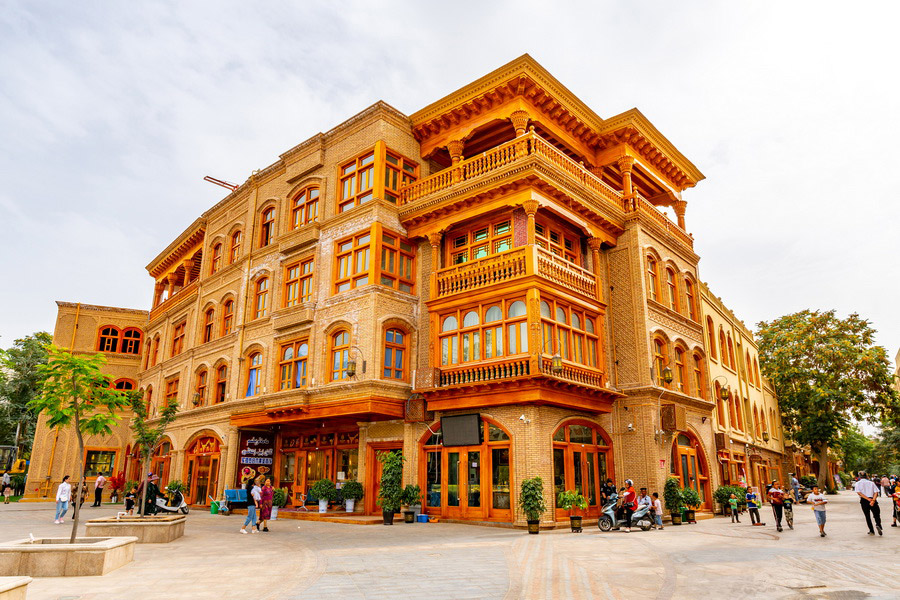 Hotan - an ancient city of the Great China

Among the horizonless sands of the Takla-Makan Desert, in the south-west of Xinjiang Uighur Autonomous region of China there is Hotan city located in an ancient oasis. The city’s history is closely connected with the Great Silk Road. This was one the largest transfer points on the caravan way, and also one of the centers producing silk which was imported to China.

In the period of the ministry of the Han and Tang Dynasties, Hotan was not part of the Empire. It was rather an extremity the Chinese power extended to. According to an ancient Chinese legend, a Chinese princess getting married to Hotan king in the V century, did not wish to leave her silk clothes brought the secret of silk production with to Hotan, where it was eventually stolen by Sogdian merchants. Thus, since that, silk was produced not only in China.

One of the peoples inhabited the oasis were Saka warriors, who lived there in the I millennium BC. Actually, the role of the city’s founder belonged to them. But today there are only ancient Buddha writings in the Hotanese language left after theses tribes. This place was also inhabited by other ancient peoples of Central Asia, including the Tokharians and Sogdians. The latter were the first to get the active trade processes on the Great Silk Road started at the beginning of the first millennium. In 1274 the famous traveler Marco Polo visited Hotan during his trip to China.

According to Chinese standards modern Hotan is likely a provincial city. Its population amounted to about 114,000 people, mainly predominated by the Uyghur. The city has no large factories and plants or any other major industrial enterprises, that is why it managed to preserve a primeval atmosphere. One of the main Hotanese treasure is greenstone. It is extracted in the city’s outskirts, and the local residents, like thousand years ago, with the help of this beautiful stone create the applied art items, majestic in their beauty and execution.

The greenstone has been extracted in Hotan for several millennia. It has one of the world’s largest minefields. There is a tradition among the local residents to keep and pass from generation to generation some greenstone items – some of them are over thousand years. A short way from Hotan there is another city’s landmarks - Mazatagh Mountain “Cemetery Mountain” or red and white mountain, since its one side is red and the other is white. Inside this mountain there is a cave with ancient writings on the wall extant up to date.

Hotan is famous not only for its greenstone products but also for its carpet weaving. The Hotanese carpets are considered one of the best in the world. They are made of wool; its manufacturing secret is passed on from generation to generation among the Uygur women. The city has its own factory where the local mistresses weave hand-made carpets.

Hotan is famous not only for its history and landmarks, but also for its nature. The climate there is rather arid, but still its horizonless desert neighboring with the blooming oasis is a rare contrast attracting everybody at first sight.