The area around Turpan strikes with its variety and magic beauty. From ancient times these sites are considered so dangerous, that many medieval travelers’ notes referred Turpan as “The Limbo” and Fireland”.

One of the most beautiful and at the same time mysterious sights of Tupan is Flaming Mountains, located 10 kilometers to the east of the city. They are a kind of boundary between Turpan and the Taklamakan Desert, which has a reputation of the world’s most dangerous desert. 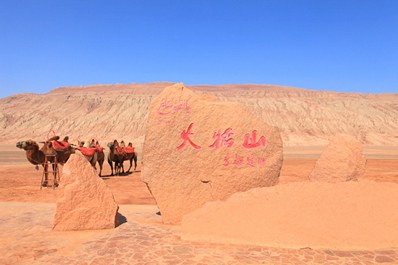 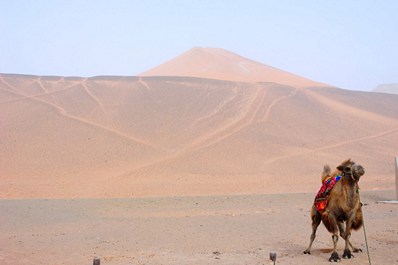 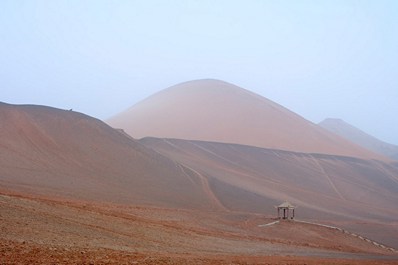 The height of Flaming Mountains with one of its spurs is about 500 meters; they constitute a part of the Tien Shan Mountains. Their length is over 97 km, and the highest point reaches 830 meters. It opens a magnificent view of Turpan and its surroundings. From there you can see the famous Grape Valley, located at the piedmont, and also the ancient city of Gaochang, with its temple ruins and the famous Bezeklik mountain caves.

At sunset, when the mountains are painted in the colors of the declining sun, their slopes look like the flame, making a mountain flamy. The mountains themselves were formed 50 million years ago. Yet before the arrival of the first man, Flaming Mountains were active volcanoes. Within a few million years, the lava, flowing down, formed a kind of ravines adding the today’s yellowish-orange color to the mountains.

Flaming Mountains are associated with the most unusual and mysterious rumors and legends. One of the Uygur legends has it that a bleeding evil dragon once killed in this place turned into Flaming Mountains. Many travelers often said that the shape of the mountains really resembles a dragon stiff in death.