The famous ruins of Gaochang, Turpan

Majestic Gaochang - a pearl of the Gobi Desert

“The Dead City” – under this name the famous ruins of Gaochang located 46 km from Turpan at Fire Mountains eventually became known. The city was considered the queen of the Gobi Desert for its beauty and majesty in the ancient time. Today, the ruins of Gaochan are considered one of the main attractions of Xinjiang.

The city’s history begins in the I century BC during the opposition between China and the Huns. The Huns originally built Gaochang as a military fortress. Gradually the fortress was expanded developing into a city. At the beginning of the new millennium, the city passed into possession of the Turcuts, and in the middle of the V century it became a part of the Zhuzhan Khanate. However, in the VII century the Uyghur tribes separated to form the Uyghur Kingdom in this and surrounding territories. During this period, the city was called Dukhu, which means a “royal city”. Gaochang existed up to the XIII century, until it was destroyed as a result of the Mongol invasions. 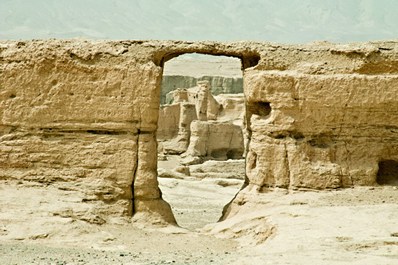 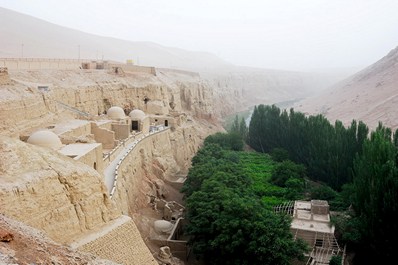 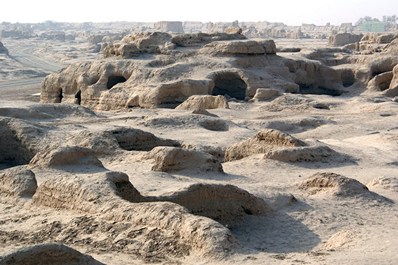 During the operation of the Silk Road Gaochang turned into a large well-developed city, which was one of the first to accept Buddhism as a religion. This fact is confirmed by the ruins of several big temples and a Buddhist monastery in the center of the city. According to legend, there lived Syuantszan, the famous

Buddhist monk a short time, however nearly every city of East Turkestan standing on the Great Silk Road can boast about it too.

Today only the ruins, once being majestic, of fortress walls, the ruins of houses and churches, as well as fragments of the palace complex have been left from the past glory of the city. Here and there you can see ancient patterns and designs which are almost erased, as well as altars with dilapidated statues of Buddha.

Gaochang is listed as UNESCO World Heritage site as one of the few extant ancient adobe cities.