Attractions of Xian – the Bell Tower

One of the popular sights of Xi'an is the Bell Tower. It was built in the XIV century under Zhu Yuanzhang, the Ming Dynasty first emperor, in the center of Xian. The tower was located at the intersection of southern, northern, eastern and western roads that led to the main gate of the City Wall.

Construction of the tower was connected with a legend about a huge underground snake, who was the cause of frequent earthquakes in the city. The Bell Tower was built to expel the Snake from the Chinese land. Anyway, after its construction, the earthquake really stopped happening, and the tower was assigned with another functions. Every morning, the huge Bell Tower announced the start of the day to Xian citizens. Its peal of bell was a call for trade shops to open, and people to begin their work.

By the way, there is also an interesting story connected with the Bell Tower. The bell of the Tang Dynasty Jingyun which was initially established, ceased to peal, when the Min dynasty came to power. Instead, another bell, a smaller one was cast and established in the building’s north-western corner, where it is still in place. The first bell is displayed today in the collection of the Xian Forest of Stone Steles Museum. 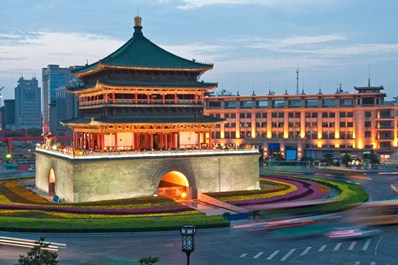 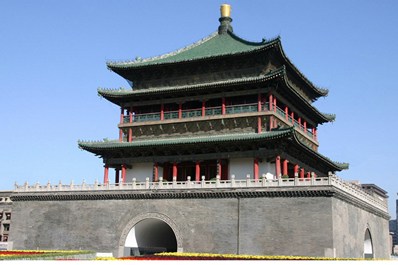 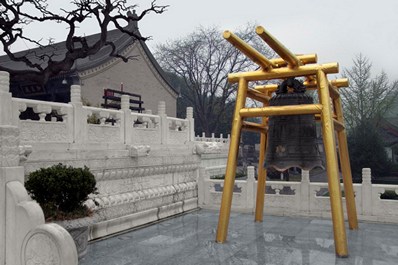 The Bell Tower in Xian is the largest and well-preserved ancient tower in China. It is not only of a cultural and historical, but also of art value. The Bell Tower rests on a square brick base. It is followed by three wooden tiers with dark green-tiled roofs, the corners of which are curved up. The total height of the tower is 36 meters; inside it, there is a spiral staircase. The building’s interior is decorated with the traditional patterns of the Qing and Min eras. The patterns are applied not only to the walls, but also to the ceilings, wooden beams and crossbeams. There was time, when the tower roof was also decorated with gold and precious jasper. An interesting fact is that no nails were used in the construction of the Bell Tower. The whole structure is joined by the grooves and spikes. This type of construction in China is called dougun.

By the end of the XVI century, Xian expanded so much that its center shifted almost 1,000 meters to the east. That is why the Bell Tower was re-located to the new center of Xian. Accordingly, its foundation was laid anew; the upper structures were dismantled and then reassembled in a new location. The transfer was carried out quickly and without much expenses, which was a great achievement architects of that time.

In the brick foundation of the Bell Tower, there are four six-meter trussed arches, the people and transport used to pass through. When the traffic became too busy, the passage was closed, with subsequent arrangement of a ring road around the tower instead. Now you can get inside by special underground passages.

You can clang the ancient bell in the Bell Tower - according to¬ the local beliefs this brings good luck. Tourists will surely be interested in the wax museum of emperors from the dynasties of Qin, Tang, and the Museum of Musical Instruments. Besides, the tower’s lower floor is fitted with antique furniture of the Qing era.

The tourists and residents may attend folk concerts with dancing and singing organized for them from time to time. The artists dressed in traditional costumes, played the ancient instruments.
The Bell Tower commands a panoramic view of the central part of Xian. Near it, there is a square with a fountain and flower bed laid out in the intermediate vicinity. Modern buildings and shopping centers also rise nearby. In the evening, the Bell Tower building looks particularly smart in the lights of bright illumination.