City Wall in Xian is a Medieval Fortification

City Wall in Xian is heritage of dynasty Ming rule

If you take a trip to Xian by train, the first thing you will see upon arrival will be a high battlement, stretching along the railway. This is the City Wall of Xian, one of the local landmarks numbering over 600 years old, and the only extant city wall of modern China.

The City Wall was built in the XIV century by a son of Zhu Yuanzhang (the Hongwu Emperior), the first ruler of the Ming dynasty. Erected along the perimeter of the whole city it is supported by a foundation of earlier city wall built in the epoch of Tang dynasty reign in Xian. In those far-off days, this wall of rectangular shape - 12-m high and 15-18-m wide, was built to protect the city which was the capital of the Ming Empire (the Empire of Great Min). 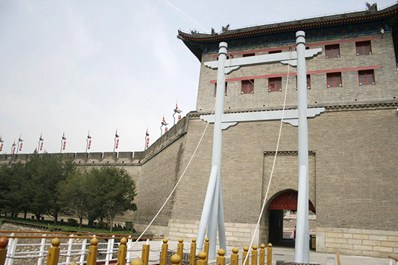 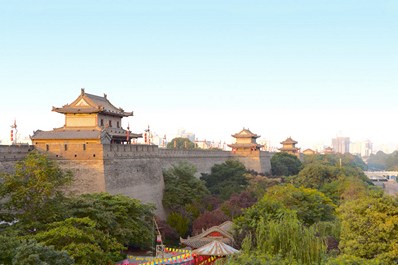 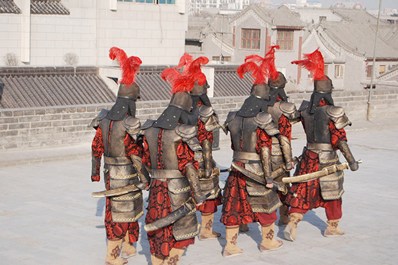 Initially, a mixture of earth with rice fibrin and burnt lime was used as a building material. Later, the wall was completely strengthened with brickwork and from above, fitted with drainage system. The City Wall featured 4 main entrances located in cardinal directions: Anding (harmony peace) in the west, Changle (eternal joy) in the east, Anyuan (forever harmony) in the north, and Yongning (eternal peace) in the south. Every entrance was protected by three towers (dungeon, gun turret and observation tower) with a folding bridge at the gate. The three towers were connected with tunnels, capable to house warriors, and fitted with special passages for horses. Furthermore, along the whole wall perimeter at a bowshot distance in the corners, there were motte-and-baileys with archeries keeping the watch. All together there were 98 watchtowers, each capable to house a small garrison. The corner turrets were also fitted with well-strengthened ramparts which were handy vantage-grounds to defeat enemy attacks. For the same function were used the wall pinions, numbering almost 6,000, behind them, it was handy for overwatching the enemy and archery. Near the wall there was a moat filled with water. Thus in the XIV century, the City Wall was a Xian reliable defensive installation, which, by the way, never came into play. In the XV century Xian was not the capital any longer and lost its strategic importance.

Centuries went by and the city was developing both inside the City Wall and outside it. An excellent panorama view of the city is another advantage of this Xian attraction. Today, having climbed on the Wall everybody will pay attention to the contrast between the city’s look inside the wall and outside it. From one side it is an old town with narrow densely populated city’s blocks, preserving the configuration of age-old austere geometric planning and with the Drum Tower and bell tower overlooking it, and from the other side, there are modern skyscrapers with screaming advertising signboards and highways.

Though all together there are 16 gates leading to the wall, however the southern gate is most frequently used. From there, the tourists can get on the City Wall for a certain payment. The rest gates may be closed to preserve the monument.

The City Wall length is about 13.7 km (9 miles) that is why there is bike hire center at the ascending point to the Wall. A wide choice of bikes is available for you - from conventional models to tandem ones with spacious baggage compartment. If you wish, you may also make use of Chinese rickshaw services, or rent an electric car, like the one, used in golf clubs. By the way, the road topping on the City Wall is bumpy, so the bicycle riding is for enthusiasts.

The City Wall is decorated with Chinese red lanterns, which light up it at night. Walks after 8 hour in the evening are especially beautiful. On your way you will come across a few gift shops, the rest part of the stroll may seem a bit monotonous and eventless.

Upon renovation of the City wall, a park was laid out on it, to rest and watch the local Chinese fishing. Every day the tourists have a costume show with participation of artists, bedizened in picturesque medieval costumes, arranged on the City wall. Every year the City Wall hosts a marathon where, the participants have to run three laps, totaling 41 km!