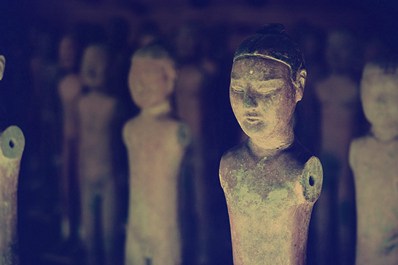 The Yanling Mausoleum of Emperor Jing Di (156 - 141 BC) is one of the most famous burial complexes after the Qin Shi Huang tomb in the vicinity of Xian.

The mausoleum, located 20 kilometers away from Xi’an, behind the Wei River occupies a vast territory of 12 sq. km. Besides the emperor’s tomb there is also the tomb of his wife - Empress Wang, burial pits of dignitaries, who enjoyed a special imperial favor, as well as concubines and servants.

The tombs of the emperor and his wife with the bases of 160x160x30 meters are about the same size. They are located half a kilometer from each other. The sepulchral complex was reached by 86 outside pits, the excavations of which discovered a rich buried treasure of various ceramic figurines. The imperial burial pits were not opened; all the archaeological studies were carried out around them.

In 1999 on the site of excavation, it was decided to set up a museum at the Yanling Mausoleum. This museum is a large semi-dark building, sometimes with glass floors to look through from top downward contemplating the ancient artifacts found in the mausoleum. Also, the visitors are offered a holographic image, depicting the scenes from the Han epoch history, and changing on the background of beautiful scenery.

The tomb of the fourth emperor from the Han Dynasty is known for its numerous findings of pottery figures of warriors. In contrast to those found in the Qin Shi Huang Mausoleum, they are smaller, a little higher than a meter, with wooden hinged arms. Unfortunately, over time, the limbs as well as the silk clothes of the clay army decayed, and today the museum visitors can only see a lot of statues of armless and naked clay warriors of the Han army.

In addition to the figurines of soldiers buried in the Yanling tomb there were also many clay statues of servants, animals, weapons, ceramic ware, as well as food supplies -both real and made of ceramic, etc. All this was to ensure a luxurious afterlife for the Emperor Jing Di.