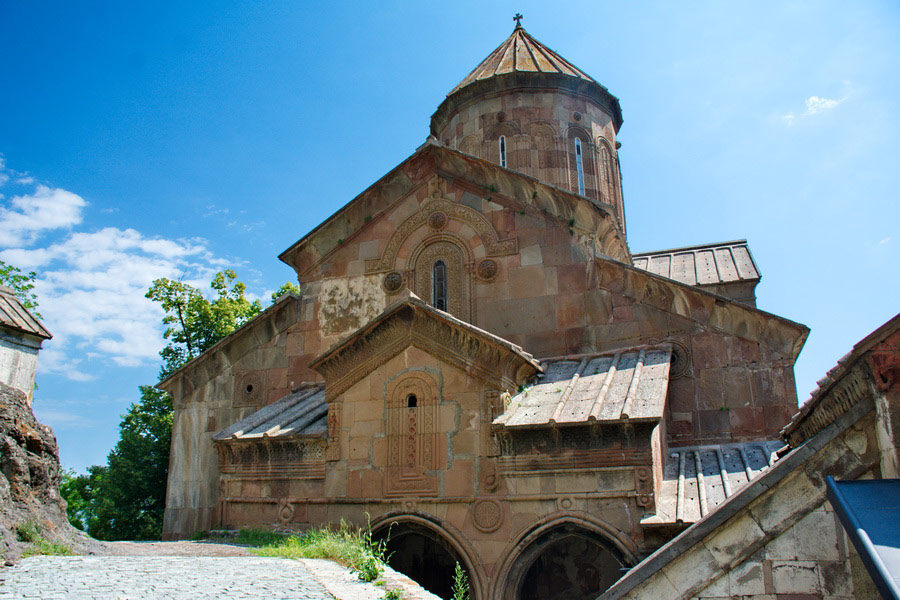 Sapara Monastery in Akhaltsikhe is a Georgian Orthodox monastery near the village of Ghreli, which falls under Georgia’s Samtskhe-Javakheti Regional Administration. For centuries, the monastery played an important role in Georgian history as the residence of the Jakeli family, a ruling dynasty of the feudal Samtskhe Principality. Currently, Sapara Monastery is a popular site for tourism and religious pilgrimage.

The oldest church in the Sapara Monastery complex is estimated to have been built around the 10th century during the reign of the House of Jakeli, a royal family who ruled southwest Georgia for centuries. The Jakelis, who managed to retain the independent status of their kingdom despite a 13th century Mongol invasion and other hardships, were largely responsible for the spread of monastic life throughout the province. During the turbulent 13th-14th centuries, the Jakelis were responsible for the restoration of other monasteries in the region, including Zarzma Monastery, and even turned Sapara Monastery into their living quarters.

When the Ottoman Turks seized power in the 16th-17th centuries, Sapara Monastery was abandoned, along with other churches and monasteries in Samtskhe-Javakheti Region. Fortunately, many of the monastery’s sacred articles were transferred to other cities in Georgia before the invasion and were thus preserved from looting and destruction.

The monastery lay completely deserted until the 19th century, when monks began to inhabit the hermitage once again. This was short-lived however, for in 1893, while Georgia was under Russian rule, the monastery was transformed into a Russian hermitage. This order was also quickly abandoned during 20thcentury Soviet rule, at which time the building was completely repurposed for non-religious activities.

Monastic life was restored at the hermitage only after the dissolution of the Soviet Union in 1989, and monks continue to reside on the premises even today. 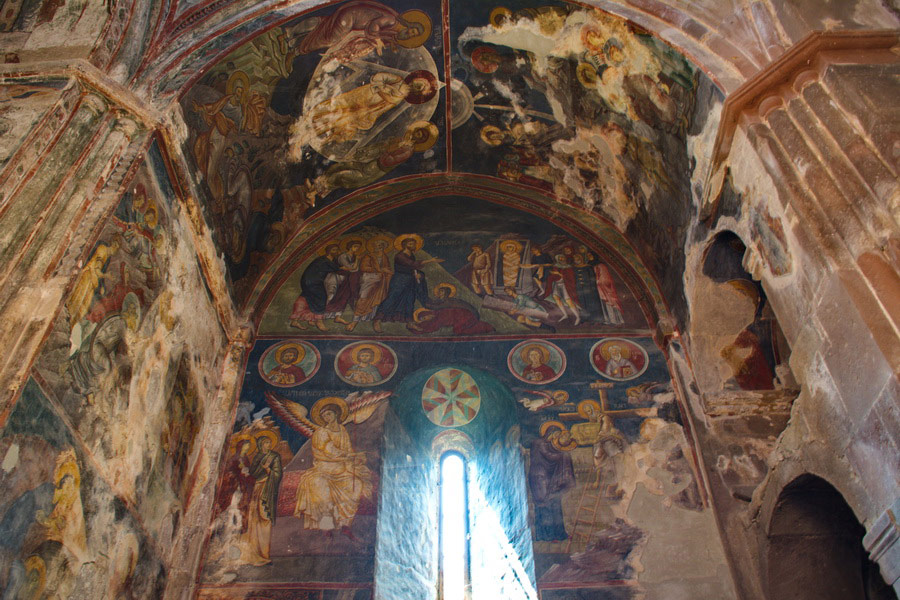 Sapara Monastery complex consists of numerous religious buildings: St. Saba’s Church, Assumption Church of St. Mary, Saint George Church, Sapara Castle and the Chapels of Saint Stephane, Saint Demetrius, Saint John Chrysostom and St. John the Baptist. In addition, a bell tower, monk’s quarters and the remains of a fortress that once guarded the monastery may be seen by visitors today.

Church of the Assumption of the Virgin Mary

The single-sanctuary Church of the Assumption of the Virgin Mary is the oldest building in the Sapara Monastery complex, dating back to the 10th century. Unfortunately, we have no written record of its founders, nor is there any inscription on the church itself. Yet the chapel’s rich and lovely ornamentation is doubtless the work of a skilled architect and designer. During restoration of the church in the 1990s, the walls built in the 19th century by Russian monks were removed, and behind them many hidden frescoes were discovered. These paintings were not part of the original 10th century structure but were likely added in the first half of the 14th century, at which time a thorough renovation of the church was undertaken and decoration of the walls was ordered by the royal Jakeli family.

One of the jewels of the Church of the Assumption of the Virgin Mary is its iconostasis, made of a soft green stone and inscribed with pictorial depictions of Scriptural passages, including the Annunciation and the meeting of Elizabeth and Mary. The iconostasis is currently housed in the Art Museum of Georgia in Tbilisi.

The largest church of Sapara Monastery is dedicated to St. Saba, who formerly ruled the land under his given name, Sargis I Jakeli. After deciding to become a monk, he relinquished the throne to his son and adopted the name Saba. Built in the 13th-14th centuries during the rule of Beka I Jakeli, St. Saba’s son, the chapel sits perched on a rock and is attached to the Church of the Assumption of the Virgin Mary. The inside of the church is decorated with various carvings, while an inscription over a side entrance indicates that the architect was a man by the name of Parezasdze. 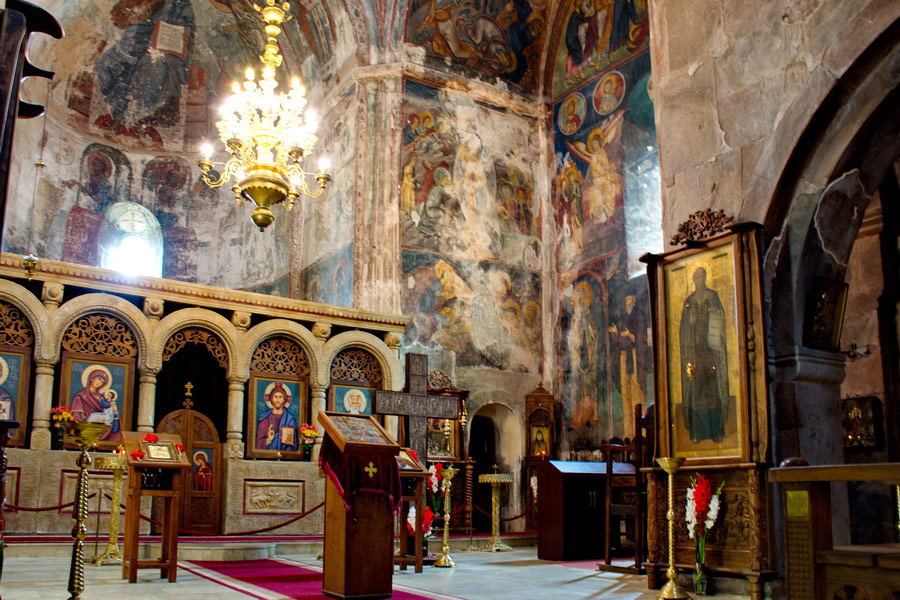 One of the original stone slabs from St. Saba’s Church, engraved with a depiction of St. George defeating a dragon, can be seen on display in the Georgian State Museum in Tbilisi.

Georgia’s monastery mountain at Akhaltsikhe is accentuated with a two-story bell tower, also dating from the 13th-14th centuries. The inside houses the mausoleum of a prominent local family whose portraits have been painted across its walls.

Sapara Palace was a once-grand castle built during the medieval reign of Beka I Jakeli, yet today only the ground floor of the palace is still visible. Constructed from hewn stone, it was clearly designed with great care, with special attention paid for the easy insertion of doors and windows. Although presumably the palace also had a second floor, likely with ceremonial halls and wide windows, the current dilapidated state of the palace makes it impossible to fully visualize its original appearance.

Above the entrance to St. George's Church is an unusual inscription stating that the cathedral was built by a man named Grigol Napshvueni for the priests of the monastery.

Tucked away from the busy modern world in a beautiful and peaceful location, Sapara Monastery in Akhaltsikhe will delight visitors wishing to discover one of Georgia’s lesser-visited medieval monastic complexes.