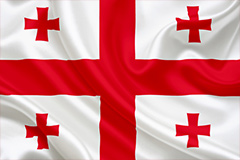 Flag of Georgia itself represents a white cloth with five red crosses, one central (St. George) and four equilateral (Bolnisski) crosses in the four quadrants. Rectangular and four small cross on a white background are the general Christian symbols that embody Jesus Christ the Savior and the four evangelists.

This general Christian symbols, as a heraldic sign was first recorded in 1099 on the arms of crusader Godfrey Bouillon, this way he was given the title of defender of the Holy Sepulcher. Ever since, this heraldic symbol was the personification of the Holy Sepulcher and also the centre of Christianity - Jerusalem. It is known by three names - Godfrey Bouillon’s emblem, Jerusalem’s emblem and the Holy sign. White colour in heraldry indicates innocence, purity, wisdom, and red colour signify courage, bravery, justice and love.