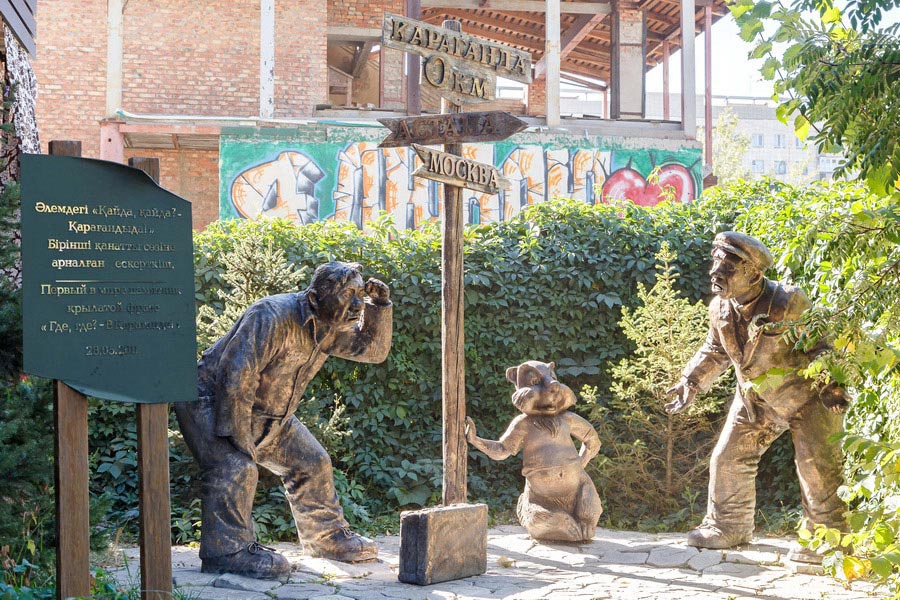 Tours, Attractions and Things To Do in Karaganda!

Karaganda, a young city, which celebrates its 80-anniversary in 2014, is just creating its history. Maybe that's exactly why only in Karaganda has recently unveiled a monument, the first one in the world, to this catch phrase. The citizens raised funds and erected a monument by famous Kazakhstan sculptors Murat Mansurov and Vinkenty Komkov to the famous phrase “Where, where? - In Karaganda”. The sculptural composition immediately became a runaway city’s landmark.

In addition to the witty monument, Karaganda has many “things to do and to see”- there are about 50 monuments of history and culture, three theaters, and three museums. The fourth largest Kazakh city hosts an annual relay race for the prize of Industrialnaya Karaganda newspaper. The races participated by up to 5,500 sportsmen are held more than 60 years on the first of May of each year.

The city, once better known for two Stalinist camps, which cooped workers of culture and art, has changed dramatically at the beginning of the XXI century. The city avenues are renovated; the appearance and equipment of the houses, administrative and cultural buildings, changed; modern shopping malls and cinema theaters, opened. Karaganda has an ethno-park whose territory hosts a whole Karaganda region reproduced in miniature. Karaganda, whose name comes from the “kara-gana” bush, growing in abundance in these steppes, is worth while visiting. And to the question: "Where have you been to?” you could answer, “to Karaganda”.

History of the city

The first settlement appeared in 1856, and small-scale coal mining began in 1857 to supply a nearby copper smelter. Mining ceased in Karaganda in the 1920s but expanded quickly after 1931 following completion of a railway link and a decree that the Karaganda basin was to be developed as a major coal-mining area to supply industry in the Urals. Karaganda was made a city in 1934 and Karaganda oblast centre in 1936. By 1939 Karaganda population had swollen to 166,000. Forced labour was extensively used in Karaganda development.

Karaganda importance increased during World War II, when the Germans occupied the Donets basin and the Parkhomenko coalmining machinery works was among those evacuated to Karaganda Kazakhstan. Coal mining and the production of coal-mining machinery still dominate in Karaganda's industry, but there are also major iron and steel works, utilizing ore from Karazhal and Lisakovsk. In addition, there are large cement plants and also food and other light industries. By 1972 the concentration of industry in Karaganda Kazakhstan had reduced water supplies in a region already semiarid and necessitated the construction of the Irtysh-Karaganda Canal, dedicated in that year.