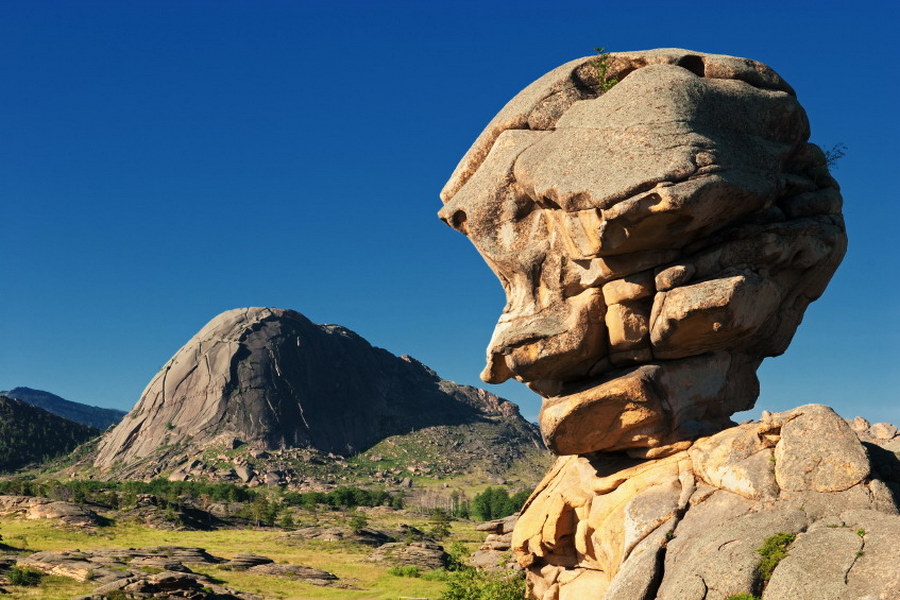 Northern Kazakhstan includes Pavlodar, Akmola and Kostanay Oblasts. This region is situated in the utmost northern part of the Republic, in the basin of the Esil, the Tobil and the Obagan rivers. From the west to the east, Northern Kazakhstan occupies the territory of more than 1300 km, and from the north to the south – about 900 km.

The main rivers are the Irtish and its two tributaries – the Esil and the Tobol. The largest lakes are Kusmurin and Sari Kopa in Kostanay Oblast, Tengiz and Korgaljin in Akmola Oblast, Shagala, Shortan and Burabay in North Kazakhstani Oblast.

Some of the lakes are famous for their medicated mineral salts and muds (Moyildi Lake in Pavlodar Oblast and Maybalik Lake in North Kazakhstani Oblast). The climate here is sharply continental, however, it differs from the other regions of the Republic in milder summer and lower winter temperatures.

Unique landscapes of Kokshetau mountains, woods and lakes, situated on the territory of “Burabai” National Nature Park; exotic caves of Bayanaul in south, richness of flora and fauna of Korgaldjin Nature Reserve can provide you a real chance to feel yourself a part of a virgin nature.

Some parts of Kokshetau Hills are: Kokshetau mountains (the highest peak is 947m), Ereimentau (899m), Zhaksy-Zhangyztau (730m); Atbasarska and Siletinskaya planes; and Tengiz-Korgalzhin hollow are situated in the territory of the Republic.

A large recreation zone including sanatorium health resort complex of the republic means was founded on the base of mountainous pine forests. There are also such reserves as: Korgalzhin National Park, Ereimentausky, and Atbasarsky; Borvskoye and Zerendiskoye hunting farms, where hunters settle and acclimatize different kinds of animals and birds.

The exploitation line of the railways was 1588km or 11,3% from the railway stretch in the Republic. The strength of the motorways with hard covering of common use is 64,7km for 1000sqm

Nur-Sultan is the capital of the republic. Since 1997 December 10 it was named Akmola, and since 1998 May 6 it was renamed in Astana (till 1961 Akmolinsk, then Tzelinograd). Nur-Sultan is an important industry and cultural center of the republic, also railway auto-transport junction. In 1824 it was founded as the military locality, in 1868 it had got the status of the town, and in 50s of XX century it was an important center of development of virgin and disused lands in the north of the country. The industry of the town is represented by agri-mechanical engineering, food industry, refining of the agricultural raw material, and transport. Earlier it was the fortification founded by the Russian Kazak troops in 1830 on the bank of the Ishim river in Karaotkel natural boundary.

Petropavlovsk was founded in 1752 on the bank of Ishim as the main fortress of Peter and Pavel on the Newishim line of the Russian military consolidation. In 1807 the consolidation was renamed in Petrapavlovsk town. In 1894 Petrapavlovsk became the largest crossing post with a building of Transsiberian main line. Today Petropavlovsk is an important industrial and cultural center and the largest rail junction.

Pavlodar was founded in 1720 under the name of the Koriakovski fort post. In 1862 it was reformed into town and renamed in Pavlodar. The oldest branches of industry are the refining of the agricultural raw materials. The up-to-date branches of industry are tractor works, oil refining and chemical branches. Pavlodar is the organized center of the Pavlodar-Ekibastuz industrial junction.

It is the resort place in neighboring of the same named settlement of urban type in Bayanaul district of Pavlodar oblast. It is situated in 210km of Pavlodar and in 135km of Ekibastuz station. There are freshwater lakes as Sabyndykol (the area is 7,4sqkm) and Zhasybai (the area is 4sqkm). Average temperature is –13,2'C in January and +20,5'C in July.

The quantity of atmospheric precipitation is 320mm. There is the rest house on the coast of Zhasybai Lake. North Kazakhstan Region is by right considered the northern gates of Kazakhstan. It is located in the ex treme south of West Siberian lowland, within the black earth belt. This factor defines its specializa tion in agricultural industry. Petropavlovsk, the administrative center of the region, is situated on the bank of the Ishim river (the left tribute of the Irtysh.) The region territory features beautiful landscapes, mountain ranges and woodland, lakes of Shalkar and Imantui natural zones. Hundreds of archeological, historical and architectural memorials are under the state protection.

The most interesting archeological objects (sites of an cient settlements and burial mounds) are located in the areas of the main water arteries of the Ishim, Chaglin ka and Iman-Burlik. For example, unique memorial of the Eneolithic Age is situated in Botai area. The objects found at the site allow assuming that this area was the place where about 5,500 years ago primitives began to domesticate wild horses.

The territory of the region accommodates part of the Kok shetau National Park. This park preserves models of natu ral complexes, the genetic fund of rare and endangered or ganisms and unique natural formations. Tourists are offered walks or rides along the routes of the Park. Here they can buy articles of traditional arts and crafts and sample traditional Kazakh food.

Kostanai is one of the largest industrial and cultural centers of the northern Kazakhstan. It is situated on the left bank of the Tobol River. The Russian and Ukraine peasant-settlers founded it in 1879. From 1893 Kostanai is the yuezd center of Turgai oblast, where annually two fairs were held.

Kostanai is the Motherland of the Kazakh pedagog-enlightener Ibrai Altynsarin (1841-1889). The meat tinned factories, confectioneries, shoe-manufacturing and sewing factories represent the light and food industries.

Arkalyk as the town was founded in 1956 with the development of extraction of bauxite deposits. There is Naurzumsky preserve, which was founded in 1931. It is situated in 250km south of Kostanai, not far from motorway Kostanai-Arkalyk. The center of the Naurzumsky preserve is the Dokuchaevka village, named so in 1946 in honor of the Russian naturalist Dokuchayev V.V. It is the zone, where Turgai birds of passage fly over. More than 150 kinds of birds one can see during the mass migration of birds in spring.