The population of Kyrgyzstan totals around 6 milion people. City dwellers account for 34.1% of the population (of which the majority live in Bishkek), and the rest are rural populations and nomadic shepherds. Though the Kyrgyz are the main ethnic group, there are over 80 total ethnic groups in Kyrgyzstan, including Uzbeks, Russians, Dungans, Uyghurs, Tatars, and even Germans.

There are still semi-nomadic populations, who travel up to the summer pastures (jailoo) for half the year, and spend the colder months in villages. Since Kyrgyzstan’s population is two-thirds rural, the economy is dependent on agriculture. 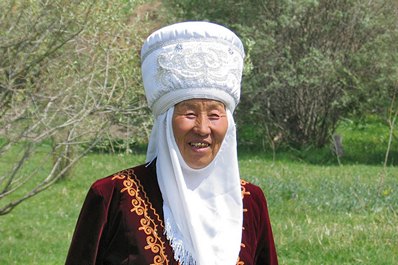 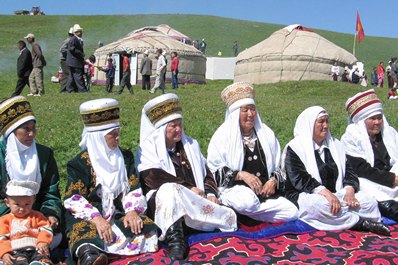 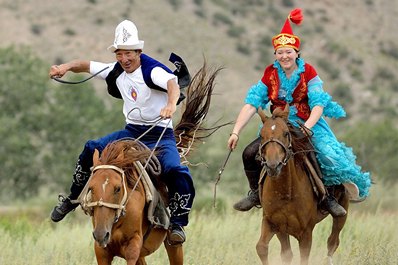 Russians make up only about 5% of the current population of Kyrgyzstan, though in Soviet times, they were a much larger part. Russian populations are concentrated in the northern part of the country, especially in Chuy Province and in and around Bishkek. Previously, Russians had been important figures in the politics and economics of the Soviet republic, and Russian had been the language of the capitol and the government. After independence in 1991, many Russians moved to Russia, and Kyrgyz moved to become the dominant ethnicity of Bishkek and the country as a whole.

There are over 80 ethnicities in Kyrgyzstan, including Dungans, Uyghurs, Tajiks, Kazakhs, Ukrainians, and even several villages of Kurds and Germans. Dungan and Uyghur restaurants can be found around the country, especially around Issyk-Kul, while Tajiks are generally more settled farmers in the southern half of Kyrgyzstan. The number of other ethnic groups in Kyrgyzstan has dropped since many people left after independence.

Ethnicity has been a major issue in Kyrgyzstan since independence, since Kyrgyzstan’s population is so diverse. Tensions along ethnic lines have complicated politics and growth, though leaders have worked on ways to include everyone in governance and the economy. There have been issues of interethnic conflict, most notably in 1990 and 2010, though now there are efforts and programs to help keep the area calm.