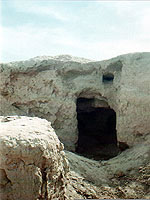 Dashkala, the ancient settlement of pre-Mongol Gurgandzh, is a polygon surrounded by a deep moat and a high rampart. Its base is occupied by the ruins of a burnt-brick wall. In Dashkala there are also the ruins of "the Gate of caravan serai", the remains of the minaret of Mamun and Dzhuma mosque.

The fragment of "the Gate of caravan serai" (peshtak) is covered by decor from fancy carved little bricks of natural beige color with dark blue, white and turquoise patterns. The majority of researchers agree that this peshtak is too fancy for a caravan serai and most likely belonged to the palace of Khorezmshakhs or a major madrasah. The only known fact is that it was deliberately destroyed by Tamerlane and later, the caravan serai was built around the survived portal.

The ancient settlement of Dashkala existed in Mongolian, Timurid and post Timurid periods.