The Mausoleum of Nadzhimetdin Kubra is the founder of the dervish order "Kubraviya" in Islam, a Sufi sheikh - the main monument in the memorial complex "360". This place is considered holy. Pilgrims from all world pay visits there. 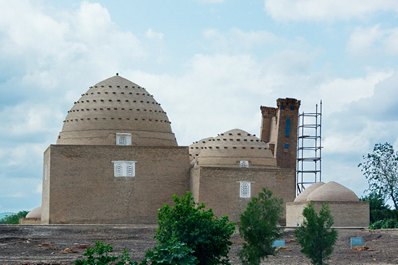 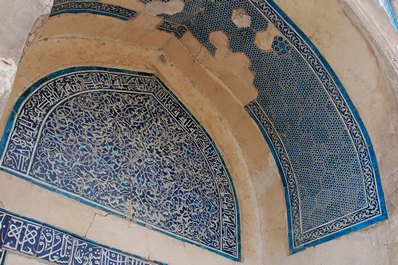 According to the legend, Horesmshakh Mohammed II executed of one of the best Kubra's pupils after by a false denunciation. The holy man got angry and damned Khoresm. The damnation soon come true - the mighty state fell under aggressive Mongol invasion. Kubra himself and his 360 pupils fought side by side to protect their city. This battle was the last heroic deed of Nadzhimetdin for the glory Islam: a Mongolian warrior beheaded the holy man. The cemetery, where today the Mausoleum of Nadzhimetdin Kubra and th e mausoleums of Sultan Ali and Piryarvali stand, was built on the site of the battle. Right beside them is the grave of young Dzhamildzhan, Nadzhimetdin Kubra 's favorite pupil.

The Mausoleum of Nadzhimetdin Kubra includes 4 dome d premises: the lobby, two assembly rooms and gurkhanu - a hall in the center of which a beautiful gravestone used to stand right on the spot where the body of the holy man fell with a high obelisk mark ing the place where his head cut by a Mongolian sword dropped. Unfortunately, whe the dome fell down, about fifty years ago, these obelisks were heavily damaged and are wait ing for restoration.