Baku - golden pages of the history of Azerbaijan 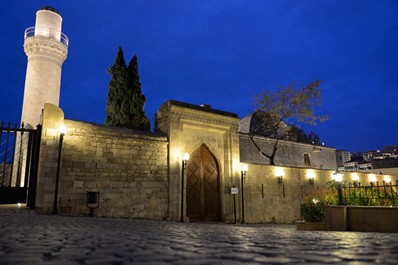 The Baku city’s history dated back to the Paleolithic epoch, when Apsheron was inhabited by the ancient man. The first petroglyphs confirming a high development level of the local tribes appeared in the territory of Apsheron in the transitional period from the Stone Age to the beginning of the Bronze Age.

The rise of Baku started in the ancient period. This is confirmed by various archeological finds. Furthermore, many medieval building of Icheri-shekher (Old City) were built on the foundation of the destroyed ancient structures, the majority of which cannot be identified up to date.

Baku sprang up as a small fortress settlement on the seacoast. It was fenced with a vallum and protected with a moat. Early in the first millennium it was already a well-developed seaport. At that period the city was under the sway of Rome, which fact was confirmed by an old Latin inscription found at the foot of Beyuk-Dash Mountain.

Early in the Middle Ages (V-XII centuries) the Baku territory was a part of Shirvan region. Under the Sasanids, Shirvan was an independent administrative unit, and later, when Azerbaijan was occupied by the Arab, this territory was called as Shirvanshakhs State, which along with Baku included Shemakha, Derbent and other Azerbaijani cities.

In the X century Baku being a small seafront fortress turned into a large commercial port at the Caspian Sea. Like many other states of the Arab Caliphate, the Shirvanshakhs State was relatively independent. The city was subject repeatedly to attacks of the Russ who were devastating it, but in general the Baku history of that period was relatively smooth. One of these attacks took place in 1030 in Baku, when the Russ troops pit their strength against Shirvanshakh Minuchihr I ibn Jazid’s troops. Shirvanshakh was defeated and the Russ occupied some territories of the state but a year later they were expelled from the Baku territory.

The XI century began with expansionist campaigns of the Turks-Seldjuks. In 1066 they attacked the city for the first time and at the end of the XII century the Shirvanshakhs State with its capital Baku fell under power of the Seldjukids. The fortifications, around the fortress city, partially extant and survived to this day belong to the end of the XII century. According to a number of historians of that period, Baku turned into one of the most unassailable fortresses at the Caspian Sea and its importance considerably increased.

In year 1220 Azerbaijan was subject to attack of the Mongols. The second invasion took place in 1231 when almost the whole territory of Azerbaijan resigned to the Mongols. Baku was the only city which offered long and fierce resistance to the Mongols, but eventually the city folk were forced to deliver the city up to the enemy.

Upon the breakup of the Mongolian state in the XIV century, the Shirvanshakhs began struggling for independence, which their state obtained only upon Amir Timur’s death. For a century Baku and the State of Shirvanshahs were absolutely independent from foreign occupiers. That period became a new stage of rise in Baku history. That was the period when the famous Shirvanshahs’ palace was erected, widespread works on estate maintenance of urban amenities were conducted, caravanserais and bridges were built.

A new stage of the conquest of the city started when the Sefevid dynasty in Iran came to power. In year 1501 Shakh Ismail Sefevi occupied Baku and annexed the country’s territories to Iran. As a result of the fight between Iran and Ottoman Turkey, Baku was falling under Turkish power several times, particularly in 1578 the Ottomans captured the city, but later on Iranian troops managed to win it back.

Since Baku was considered one of the largest commercial seaport at the Caspian Sea it was strategically important, and that is why the Russian Empire joined the fight for the city. The middle of the XVIII century saw the formation of Baku khanate, which was occupied by Russian troops for the first time in 1796. Eventually, Baku fell under protectorate of the Russian Empire in 1805.