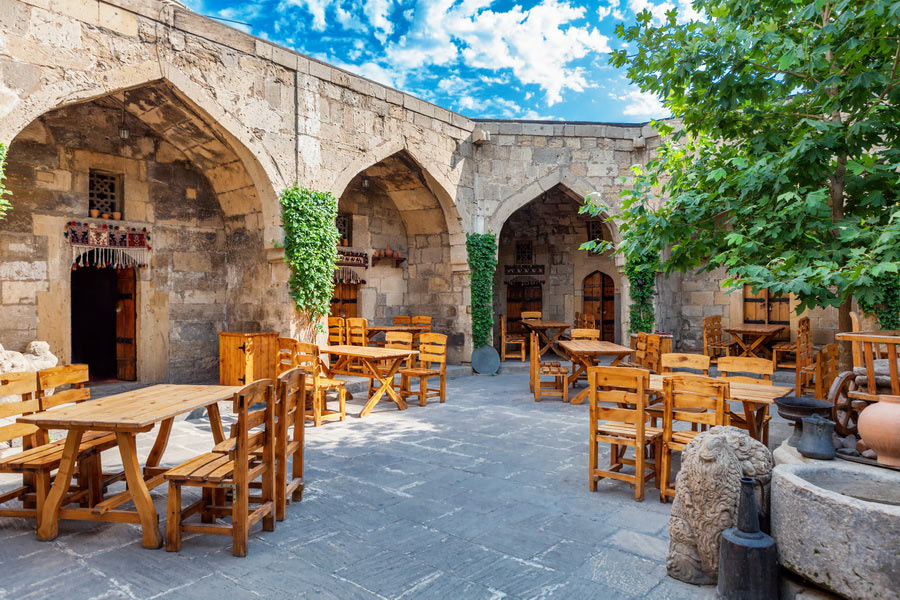 When we talk about the Ancient East, trade caravans are one of the most common associations. For centuries, the Great Silk Road had been linking Europe and the East. Numerous caravanserais were functioning along the entire length of road. Often, one could see a lonely caravanserai awaiting weary travelers in the middle of the desert. Also caravanserais were spread in the big cities with brisk trade.

Caravanserai literally means a palace on a trade route. Sometimes this name did not reflect the reality. Most caravanserais were simple one-story structures of square or rectangular shape with minimum of amenities. Often, in desert trade routes one could find only a wall with a yard and a well inside it, just to quench thirst for weary travelers and their animals. But sometimes, truly royal buildings, represented by small fortresses, could come before the eyes of travelers. Architecturally, these caravanserais are called closed ones. They were built to beat off a potential attack. They were one or two storey buildings, surrounded by ramparts. Inside, there were warehouses, stables and corrals for animals, as well as living premises.

Urban areas were presented with the other type of caravanserais - an open one. It looked more like a medieval European hotel and inn. There were stables, a teahouse, sauna and many other buildings and facilities necessary for travelers.

An example of this is Multani caravanserai in Baku. It is located in the old part of town – Icherisheher. This caravanserai was built in the 15th century for Indian merchants, fire worshipers, who came from the city of Multan in India (present-day territory of Pakistan).

Like the majority of caravanserais, Multani caravanserai has a square shape. There was a well in the courtyard. Along the perimeter of the building there were cells for individual housing. Also, the caravanserai had stables and farm outbuildings.

Studying the caravanserai, scientists discovered that it was built on the ruins of an older building. This is a characteristic feature of many remained architectural monuments of Baku.