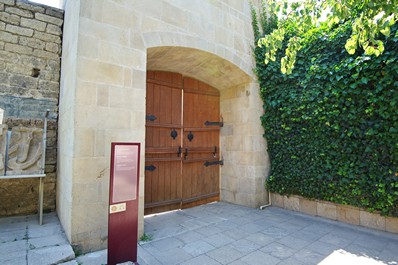 The eastern wall of "Icheri Sheher" fortress has the portal called "Murad's Gate" or simply the Eastern portal. It is also a part of the complex but it was erected in the citadel's a wall considerably later than all other structures when Baku was conquered by Turks in the 16th century. The gate was named after Turkish sultan Murad III.

Architecturally the eastern portal is made in style of divankhane and tombs of Shirvan Dynasty but one can notice some elements of building art recession: poor quality of stone, Azerbaijani ornamental skill purity decay. It was conditioned by hard times, numerous military attacks on the peninsula.

"Murad's Gate" was constructed by an architect from Tabriz . The upper part of the portal is decorated with the inscription in Arabian language: "This noble building was built in the days of rule of the most just and the greatest sultan Murad Ulu Rajab-baba Bakuji in the year of 994 (1585-1586)". From both sides the "plate" is decorated with a vegetative ornament. Unlike other palace portals this one has a wide entrance similar to a gate. Probably this structure was used as entrance into a building which has not survived or had not been erected.