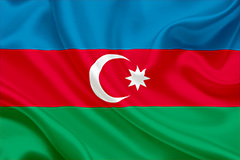 National flag of Azerbaijan was officially approved on February 5, 1991. The flag represents a tricolour, the band of blue, green and red colours are arranged horizontally. In the centre of the flag, on the red band there is an eight-pointed star and a crescent. Both images are white. According to the constitution of Azerbaijan, a blue colour on the flag is a traditional colour of Turkic peoples, red colour embodies progress and a green colour is the sign of Islam. Crescent signifies commitment to the religion of Islam, an eight-pointed star is a symbol of the eight branches of the Turkic peoples.