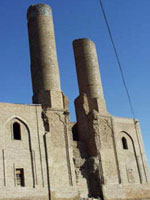 Karabaglar Mausoleum is located in a quiet small village of the same name. Long time ago the place was full of life. You can tell that looking at the ruins of small mausoleums scattered over ancient sepulchral fields and the fortifications with towers. Once there were 10,000 houses, 70 mosques, mausoleums 40 of them with minarets. One of them - Karabaglar (named after the place) has survived until now and making impression on the numerous visitors.

The mausoleum is only a part of the complex in the center of which tower slender minarets connected (in the middle) by the portal. From a distance this structure looks similar to the city gate. There are no ruins of fortifications, instead of them stand rectangular prisms on each side of the minarets. Their bottoms are decorated with a figured laying. The laying's pattern transforms into a wide belt of Arabian inscription beginning on the trunk of one minaret and ending on the other's. The inscription is made in terracotta on a turquoise background.

The tops of the minarets are heavily damaged. Inside the minarets one can find narrow spiral staircases. The mausoleum itself is round; it is divided into 12 sides. Only these sides are not flat - they are semicircular which is characteristic of the structures of those times. The surface is coated by a multi-color carpet of figured facing. The milky-white glaze of the inscription and bright turquoise of the vegetative ornament are distinctly seen on the deep blue background. The mausoleum has four portals. The ornamental patterns of the portals have the elements of golden palette. From above the mausoleum is decorated with a small spherical dome the internal part of which was reveted by a mirror cross. The mausoleum's date of construction is unknown; approximately it was built in the 12th-13th centuries.