The most outstanding and valuable monument from the 18th century in Azerbaijan is the Sheki Khans’ Palace. It was built in 1752-1762 as the summer residence of Hussein-khan Mushtad, grandson of the great Gadzhi Chelebi. The uniquely beautiful two-storied palace features a magnificent interior and exterior. The facade of the palace is richly painted with drawings displaying scenes of hunting and war, as well as intricate geometrical and plant patterns. In the center is a huge stained-glass window made from multi-colored glass mosaics (up to 5,000 glass pieces were used in each square window). Other smaller windows in the palace are also made of pieces of colored glass and covered with openwork stone lattices.

The basic material for building the palace was raw bricks, river stones, plane trees and oaks. The most amazing is that not a single nail or glue drop was used for the construction! Everything is in place due to special craftsmanship, the secret of which was lost and is now being brought back to life by local artisans. In fact, the palace took ten years to build: two years to build the basic building, and eight years to make all of the decorations. 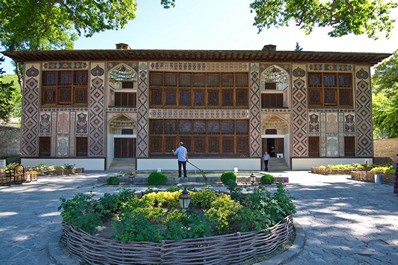 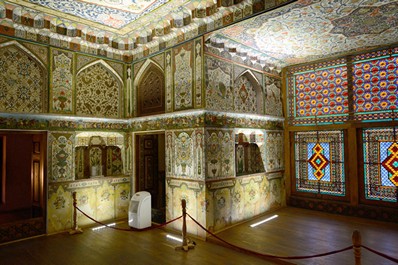 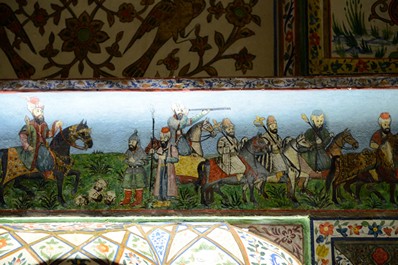 There are only 6 rooms, 4 corridors and 2 mirrored balconies in the Sheki Khans’ Palace. All the windows and doors of the palace were skillfully assembled from pieces of wood and colored Venetian glass. All of the light that filters in to the palace is rich in colors of the rainbow, from the red, yellow, blue purple and green colored glass.

Each room of the palace differs from one another and each is skillfully decorated. All the walls and ceilings are painted with miniatures: mythical birds in a garden of paradise, with unusual flowers and animals. The natural paints used for the pictures are admired by visitors because of their bright colors. This decorations shows that in the second half of the 18th century, the Sheki khanate was the center of well-developed wall painting. The paintings on the walls of the Sheki Khans’ Palace were all made with natural paints, and have been preserved pretty much intact since the time when they were painted. 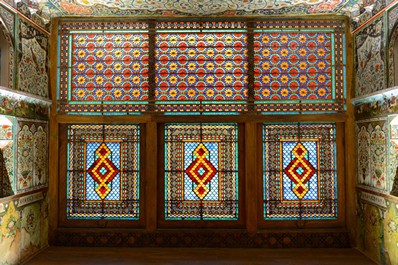 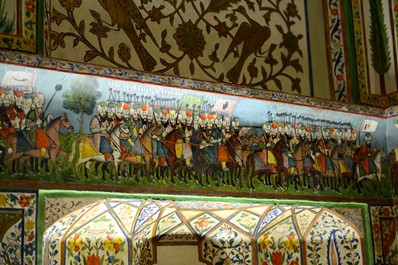 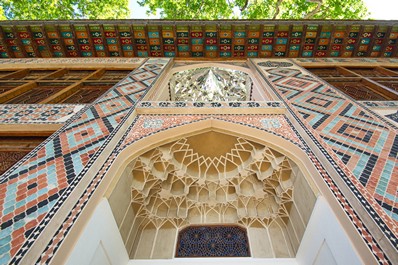 The first room that visitors entered was a receiving room, also used for meeting with diplomats and other politicians. There was a small fountain, which could be turned on when the shah wanted to talk to his closest advisors and keep his conversations secret. The windows were made with small pieces of colored glass inlaid into an intricate wooden lattice, and even though each window weighs close to 17 kilograms (37 pounds) they can be opened for ventilation. There was a small vent at the back of the room to encourage a crosswind.

The next room was a spare study, used for when the shah needed a quiet place to think. The plain walls prevented distractions, and niches in the walls could be used to hold books, documents, and candles. The ceiling was extra thick, since the study was below the main women’s room, and the shah didn’t want to be disturbed by conversations above, or for the women to accidently hear any important secrets.

The women’s room on the second floor was richly and delicately decorated with paintings of flowers and birds, as would suit the women better. Here, the wife of the shah would meet with wives of visiting diplomats. The windows could be opened to create a breezy verandah. Since the Sheki Khans’ Palace was a summer palace, cooling was more important than heating. 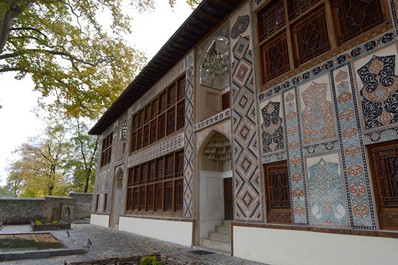 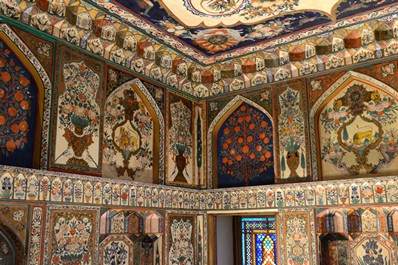 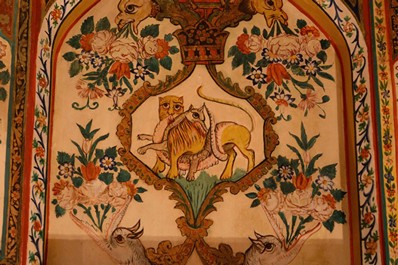 A large meeting room was the center of the second floor. The walls were covered in numerous paintings, with lots of flowers and birds. A small strip around the middle of the room shows the various wars that Sheki could have fought (though the artist used more fantasy than reality as a base), featuring armies from as far away as Turkey, Russia, and Mongolia, all recognizable from their hats and flags. The ceilings were designed to perfectly mirror the carpets that would have been on the floor, but the carpets were taken by the Russians and taken to the Hermitage.

The final room on the second floor was designed to be a private study, when the shah needed inspiration for dealing with matters of state. The paintings on the walls and ceiling were meant to remind the shah of the principles of running his khanate. One painting shows a lion attacking a deer, which meant that the shah would always defeat his weaker enemies. The next painting is a lion fighting a dragon, since strong leaders would always be fighting each other. Over the door, wolves and deer running together, because the weak and the strong must live together. All around are dragons that breathe flowers instead of fire, since the khan must be benevolent and kind to those who are weaker than him and not abuse his power.

Despite all of the work put into building the Sheki Khans’ Palace, the royal family didn’t usually sleep at the palace. There were so many buildings available for the family, that they had other places to stay and didn’t have to sleep in this palace. Unfortunately, most of those buildings were destroyed in wars and shifting empires, and only the Sheki Khans’ Palace remains today. Several restorations have brought the palace back to its former glory.

In front of the palace there used to be a marvelous garden, from which only two huge branchy plane trees, which are even older than the palace, have survived. For 500 years, like devoted servants, they have been protecting this architectural treasure of Azerbaijan.