Tours, Attractions and Things To Do in Sheki

Set in a picturesque mountain area 380 km (235 m) from Baku, Sheki is not only surrounded by beautiful scenery, it’s a beautiful village itself. The most famous sight in Sheki is the Sheki Khans Palace, featuring incredible craftsmanship and built without using a single nail.

Archaeological data show that Sheki has been inhabited for about 2,500 years, making it one of the oldest cities in the Caucasus. There are several architectural and archaeological places around the city, including the Gelersen-Gerersen Fortress (8th-9th centuries), numerous caravanserais, the Juma Mosque (18th century), the Gileilin Minaret (18th century), and medieval baths.

Sheki is a major crafts center. Here, you can buy jewelry and engravings made by local artists. Sheki has its own theater, a historical museum, and the house museum of the famous writer and philosopher M. F. Ahundov. 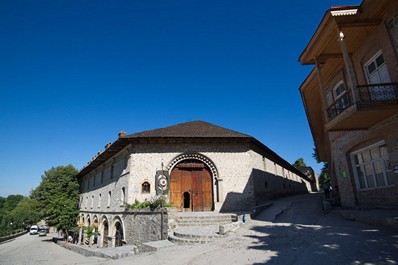 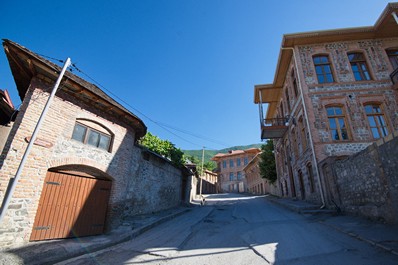 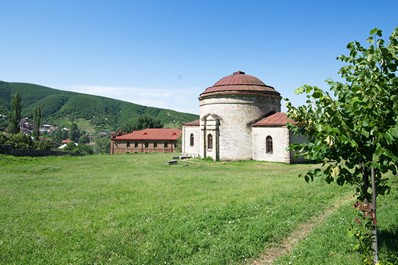 Sheki was famous as a city of craftsmen and merchants. Traders from all of the countries along the Silk Road used to gather in Sheki, so great attention was paid to the construction of caravanserais. Through the 18th and 19th centuries, 5 big caravanserais were active in Sheki to house all of the travelers passing through. Only two of them have survived. The Upper and Lower Caravanserais were built in the 18th century. The craftsmen who built these caravanserais tried their best to make them as comfortable as possible, giving plenty of space so that travelers could rest, store their goods, and trade with local residents. The cellars were used for storing goods, the first floor was for trading, and the second floor was where travelers and merchants would stay.

The Juma Mosque, or Khan’s Mosque, was constructed in 1745-1750, near the market square. Directly in front of the mosque is a small cemetery. Gadzhi Chelebi, the ruler of Shki in the 18th century, is buried here. The tombs here are topped by domes, with scripts in Arabic letters cut into the gravestones. The mosque, its minaret, and the ancient cemetery are protected today as important historical monuments.

Gileili Minaret is a monument dating back to the 16th-17th centuries, when it was part of the Gileili Mosque. Unfortunately, the mosque has not survived to the present day, and so only the minaret, now under state protection, remains. Built of burnt brick, the Gileili Minaret can be seen from the Kyulekhlin neighborhood in Sheki, and is the first and tallest minaret in its district.

Sheki has a very well-preserved bath, called a hamam, from the 19th century. It was constructed in the style of other traditional baths: there are two large rooms, one for undressing, and one with a heated floor, for bathing.

Babaratma-Piri is a small mausoleum located near Sheki. It is located on the territory of an old cemetery near the village of Taza-Kent. This place is esteemed by pilgrims, who believe that it can cure illnesses. Near the mausoleum is a small mosque.

In the high-mountain village of Ilisu, not far from Sheki, is the Sumug Fortress.

According to legend, this fortress was built by the khan for executing unfaithful concubines, and later became a watchtower for Dani yal-bek, the local leader. Earlier, Dani yal-bek had been an officer in the Imperial Russian army. Later in his life, he became a revolutionary leader, and joined his sworn enemy Sheikh Shamil to fight against Russian forces. However, in August 1859, the last of Dani yal-bek’s fortifications had to be surrendered.