The oasis in the Gobi Desert, Dunhuang

Dunhuang is rightly considered the biggest tourist center in the north-west of China. The numerous attractions of the city and its surroundings, in particular the famous Mogao cave complex attracts thousands of tourists every year.

One of the most popular tourist destinations, located near the town on the border of the Gobi desert, is the famous oasis with singing sands and a crescent-shaped lake, with a beautiful pagoda of the XVIII century on its bank. 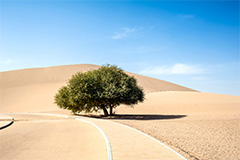 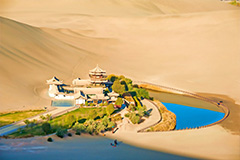 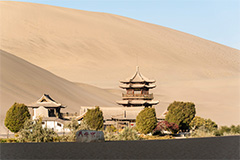 The mountain of singing sands, as majestically called by the Chinese is actually a huge sand dune, with the highest point reaching 1000 meters. They say that standing on its top, one can hear a flute singing, and even a thunder grumbling, especially if climbing it in a crowded day. The phenomenon of singing sands has not yet been investigated enough; so to say exactly what causes this effect is not possible.

However, the Dunhuang residents have their own legend about the origin of the singing sands, which is directly connected with the famous lake in the shape of a crescent. This lake located in the center of the sand dunes with its small sizes and perfect form makes you think about a man-made origin of the place that is actually impossible in the Gobi Desert environment. It is still a mystery how the sands did not swamp this small oasis in the desert during a huge period of hundreds of years.

The legend has it that once, right at this place Taoist thinkers and philosophers built a magnificent palace with a crescent-shaped lake, which was beyond the control of the sands of the desert. But soon as a result of a natural disaster, the palace was completely buried in the bowels of a huge dune, and today, only the singing sands and unusual lake remind of its past greatness...