Dunhuang - a shining city of the Great Republic of China

In the north-western part of Gansu province there is one of the main cultural and historical centers of China – the city of Dunhuang which translated from Chinese as “radiant”. Dunhuang is an oasis city located at the very edge of the Takla Makan Desert. Compared with other cities in China it is a relatively small city. Its population numbers a little more than 100,000 people. However, every year, the city is visited by tourists numbering up to several millions. In ancient times the city was one of key transit junctions on the Great Silk Road. It was this place where the caravan road was divided into Northern Road, running across the Uygur and Kyrgyz lands and Southern Road running through Tibet and Afghanistan.

Amidst the sands on the border of the Takla Makan and Gobi Deserts there is a small lake in a crescent form. It was the place where ordered by the Emperor Wudi, the Chinese established the Shazhou (Dunhuang’s ancient name) military post in the II century BC. By that time the Great Wall of China had already been strengthened by Jiuguan («Jade Gates») and Yungan fortification works, crossed by the Great Silk Road. Thus, Dunhuang became the “gates” to the Heavenly Empire. Thousands of years hundreds of caravans loaded with various goods from precious stones to cereal crops were passing through Dunhuang. 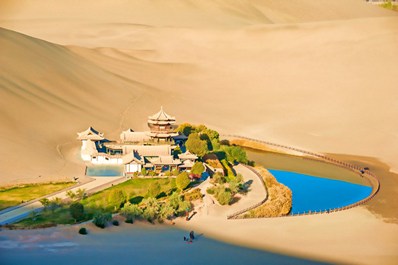 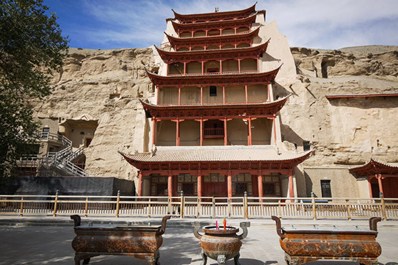 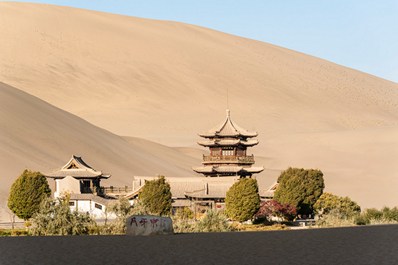 Furthermore, Dunhuang was considered a cradle of Buddhism in China. From there, Buddhist monks were wandering by the Silk Road disseminating their teachings among the resident population. This city was the place for the Chinese and foreign followers of Buddhism as well as numerous pilgrims from different countries to gather. 25 km from Dunhuang on the Yueyaquan lakeside there is one of the largest Buddhist temple complexes also known as the Caves of the Thousand Buddhas represented by caves cut in the rocks. This complex more often was called Mogao after the main cave or “Thousand of Buddhas” cave.

This temple complex has its own amazing story. In year 366, the monk by name Leig Tsung moving along the Great Silk Road saw a flash of light with a thousand of Buddhas coming out of it. Amazed with this portent, he left the caravan and set forth to the oasis. He dug the first cave, when thousands of pilgrims strung along with him following the Leig Tsung’s example in aspiration to get enlightenment. Thus over a few centuries, hundreds of gorgeous caves were created which later became one of the world’s most beautiful Buddhist temples.

Up to date there survived 700 caves, extending for 1,680 m. Among them there are big caves with area of 200 m2, and very small ones less than a human height. A distinguishing feature of the Mogao caves is that almost all the caves are painted with colored frescos on Buddhist theme. One of the remarkable discoveries of the Mogao caves was an ancient Buddhist archive.

In year 1900, there were revealed about 50,000 monuments of written and artistic culture dated back to the IV-XI centuries. Among them there are ancient Zoroastrian and Buddhist texts, silk engravings and depictions of Buddha. Furthermore the complex’ territory managed to preserve several Buddhist temples and houses of ecclesiastics.

Today Dunhuang is a cultural and tourist center. It attracts much attention of the tourists and pilgrims from all over the world. There, it is possible not only to visit places sacred for the Buddhists but also take part in traditional festivals of local boats in a form of dragons annually held in May.