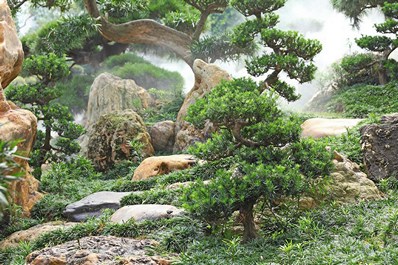 In the south of Lanzhou, where Hwang Ho water gap ends and the mountains start, there spread out Lanshan Park with Gaolan Shan Mountain as its peak. The park vast territory stretches for 10 kilometers: numerous paths and roads wind around the mountain, whose peak with three pavilions greeting a wide panorama of the city and adjacent mountains can be reached by a special route.

By mid-XX century, there was a single tree growing on the Gaolan Shan peak, but thanks to the efforts of the Lanzhou residents the hillsides turned into a wooded area. To make the trees establish they thoroughly watered the soil, not to allow the plantlets droop from draught. Today, a half of century later, everybody who wishes may enjoy the nature of the artificially-established forest.

Five Springs Park, stretching at the foot of the similarly named mountain is located behind Lanshan Park. It took its name from five springs originating from the hillside. This park was a well-known resting place for Lanzhou residents as early as 2,000 years ago. Furthermore, the park is a conservation area, since it includes few ancient temples, old-time bridge, and other landmarks in its territory.