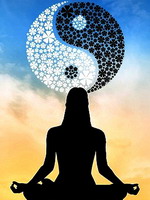 Taoism is one of the oldest native Chinese religions. Presumably it was formed at the beginning of the VI century BC by the ancient Chinese philosopher Lao Tzu.

There exist the most incredible legends about Lao Tzu. It is believed that he had a magical gift; his birth is associated with a lot of incredible rumors, the most common of which says that he was born from a ray of light. Historical documents indicate that Lao Tzu was born in Luoyang in a family of wealthy citizens. Almost all his life he worked as an archivist, and died in the year 517 BC.

Taoism is a religion based on the “Tao” doctrine - the way to achieve harmony. Tao is the beginning of everything and its main rule is to follow the fate (“the flow of life”) without resistance, and sometimes just drifting - going with the flow. The main Taoism postulate is the principle of balance and relationship of the masculine “yang” and the feminine “yin”.

At the heart of masculine “yang” there are all good qualities, that of feminine “yin”, by contrast, - all passive, “dark” qualities, but they could not exist without each other, otherwise it will lead to chaos. And Taoism offers the way to be covered in order to achieve harmony between “yin” and “yang”.

The sacred book of Taoism, if this philosophical treatise can be called like this, is “Tao Te Ching” attributed to Lao Tzu. The book describes the structure of the world where the main driving force is “Tao”.

Thanks to Tao it is possible to achieve immortality (longevity) - very much appreciated among the Chinese.

The “chi” energy can establish the relationship between body, mind and environment, which is the main objective of all the followers of this philosophical doctrine. The most common way is a special breathing exercises “Tay- tszytszyuan”, which helps a person to connect his “chi” energy with the “chi” of natural energy. The “tay tszitszyuan” technique underlies all the Chinese martial arts, as it can help to provide a concentration of “chi” energy needed to resist the enemy by forces of the heaven and earth.

It should be noted that Taoism has developed a number of interconnected systems to control “chi” energy, which are designed to achieve harmony. In fact, “tay tszytszyuan” breathing technique is part of the ancient Chinese art of body self-regulation – “Qigong”. “Qigong” is very often used in martial arts and medicine, as it promotes relaxation, and spiritual and physical awakening. It includes a practice of meditation, breathing exercises, various martial practices and philosophical theory. It is due to practicing and mastering “qigong” technique for many years of constant training, Chinese monks strike the whole world with their abilities to live without food, water, and even without air for a long time. If we consider the “chi” energy as a foundation of all existence, and the “yin” and “yang” harmony as the main goal for every follower of Taoism, then “qigong” is a kind of mechanism to achieve this harmony.

In the Middle Ages, Taoism was divided into two areas: the philosophical and religious. The latter has been overgrown with new Gods, such as, for example, Yuydi, the supreme lord, who is the master of the heaven and the earth, or Zao-van - the God of the hearth. This philosophical trend has found its way to medicine, martial arts, literature, painting and so on.

Today Taoism is widespread throughout China. It is closely intertwined with the other religions of China, such as Buddhism and Confucianism. This is confirmed by the numerous temples and monasteries, which feature a combination of all three principles of Chinese religions in graffiti and murals. This is particularly evident in the murals of the Mogao cave complex and the ruins of Gaochan ancient temples, where the Taoist deities are also present along with Buddhist ones.