The Big Wild Goose Pagoda was erected at the place of former Da Ci’en Temple complex in the north of Xian, outside the City Wall. The 5-tier pagoda building was built in 652 AD under the Tang Dynasty ruling in Xian at that time. Later on, it was re-built several times and “grew” 3 tiers higher. The violent earthquake in the XVI century destroyed its top and today we can see only seven tiers survived from the pagoda.

There is an old-time legend connected with the pagoda origin. It narrates that the Buddhists in ancient times were divided into meat eaters and vegetarians. Once the Buddhist who ate meat ran short of it and they did not manage to buy meat in the city. One of the monks said to his brothers: “I hope that merciful Bodhisattwa will give us some meat.” He cast a heavenward glance and saw a flock of wild geese flying high in the sky. At that very moment the flock leader started and fell in a dead faint right at the monk’s feet. The amazed monks understood that Bodhisattwa showed his spirit to order them to be more pious. On the place of the fallen goose a pagoda named the Big Wild Goose Pagoda was built. Since that time, monks stopped eating meat. 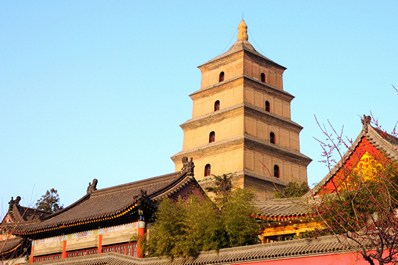 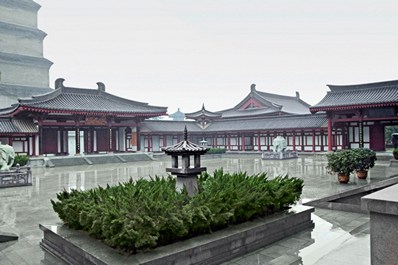 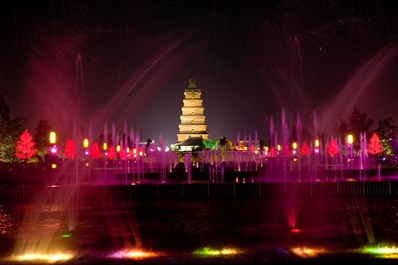 The pagoda built there, was used to keep Buddha statues brought from India, ashes of saint and holy Sanskrit texts brought by hierarch Xuanzang. He not only brought scrolls but also translated the manuscripts in sutras into the Chinese language totaling 1,335 volumes.

The Big Wild Goose Pagoda is not only historical monument, but also a worthy example of ancient Buddhist architecture. Its building with height exceeding 64 m was in a form of square pyramid, notable for symmetry and austerity of the proportions. Today it is one of the main landmarks in Xian visited by thousands of tourist. Going on to excursion to the pagoda, the visitors can attend a monks’ mass, and in the morning, watch the locals, who, on the ground near it, exercise Tai Chi to train the body and stiffen the spirit. In autumn, the city-folk may enjoy colorful show of fountains organized for them.