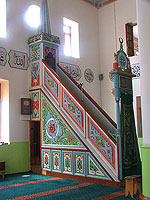 According to legend, preaching the Christianity in Georgia started from Adjara after Andrew the Apostle in the I century BC. Subsequently, Turkey, which dominated there for almost three centuries, strenuously pursued Islamization of Christian population. Today the number of Moslems in Adjara makes about 30%. The live mostly part in the rural areas. Nowadays they build and restore mosques. One mosque has preserved in Batumi.

Adjarians are tolerant toward the representatives of all faiths living in the Republic. The followers of each belief enjoy the right of religious freedom provided and guaranteed by the Constitution. The religions there are Orthodox, Muslim, Catholic, Judaic and others.

There is a temple for every faith in Batumi, including synagogue and catholic church. For the first time the Gregorian church was returned to Armenians, living in Abkhazia. Adjara has four Orthodox temples, three of them are situated in Batumi.