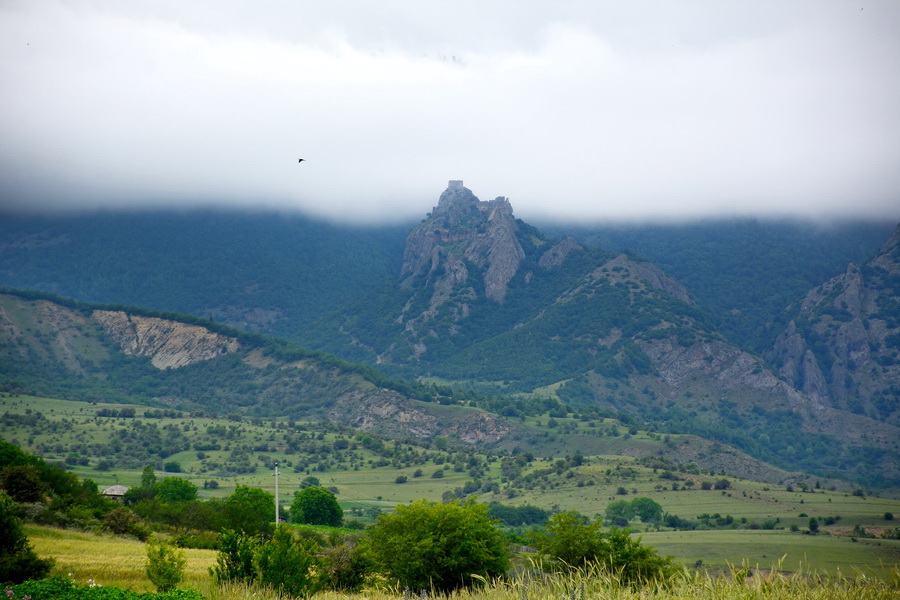 Okros Tsikhe (Georgian: ოქროს ციხე) is one of the largest fortresses in Georgia, located some 1,700 meters above sea level in Samtkhe-Javakheti Region. The name “Okros Tsikhe” translates as “Golden Fortress”, and the castle was indeed invaluable to the medieval inhabitants of the land. Today it remains a treasured piece of Georgian history, and although currently in need of renovation, its rustic beauty and magnificence are still palpable.

Numerous historical monuments in Samtkhe-Javakheti Region are linked with the Jakeli family, who served as the ruling dynasty of Samtkhe Principality from the 13th-17th centuries. Okros Tsikhe is no exception., and many believe that it was built under direct order of the Jakeli family as a link in a chain of defensive fortifications around the territory. While the exact date of its construction is unknown, most historians place its establishment during the reign of Beka I Jakeli in the late 13th- early 14th centuries.

Okros Tsikhe played a major defensive role during the rise of the Ottoman Turks in the 15th-16th centuries. Its robust walls and ideal positioning atop a jagged cliff made it nearly impenetrable while also enabling guards to monitor enemy movements across a large span of land.

The Meskhetian chronicles, regarded as one of Georgia’s most important historical sources, provide the earliest written record of Okros Tsikhe and outline its significance in 16th-century Samtskhe-Javakheti. A narrative in the annals depicting a fierce battle in the area indicates that during the invasion of the Turks in 1578, even the wife of Prince Qaikhosro Atabagi was at Okros Tsikhe trying to defend the territory from the enemy. After the region was decisively conquered by the Turks shortly thereafter, the fortress remained in operation for another two hundred years.

Okros Tsikhe is remarkable for the tactical way in which it was built, with varying tiers and buffers incorporated into its original design to ensure added protection against invaders. The fort is particularly noted for its towers and thick stone walls, which in some places are over 10 meters high and two meters thick. Its largest quarter is on the south side, where rows of robust walls once guarded the fortress from invaders.

The entrance was fortified on all sides by humongous boulders and an additional wall. The remains of a second door beyond the initial entrance suggest that there was once an additional two-winged doorway. Between the two original doors was a space where invaders, in the event that they were able to scale the outer walls, could be pummeled by large stones and hot resin. If the fortress were ever breached, its defenders could also regroup in one of the inner towers from where they could carry out further attacks.

If you plan to visit Akhaltsikhe or will be passing through the city on your way to Adjara, a short detour to Adigeni Municipality to visit Okros Tsikhe will be worth the effort. It is recommended that you allocate at least a half day for the hike.

From its perch upon a cliff near the village of Bolajuri, Okros Tsikhe is visible from a distance. To reach the fort, follow a paved road to the village of Shoka. From the village you will continue your climb until you reach the northern front of the castle. The ascent is steep and challenging in places, which only makes your arrival and the sweeping views from atop the fortress towers that much more rewarding!