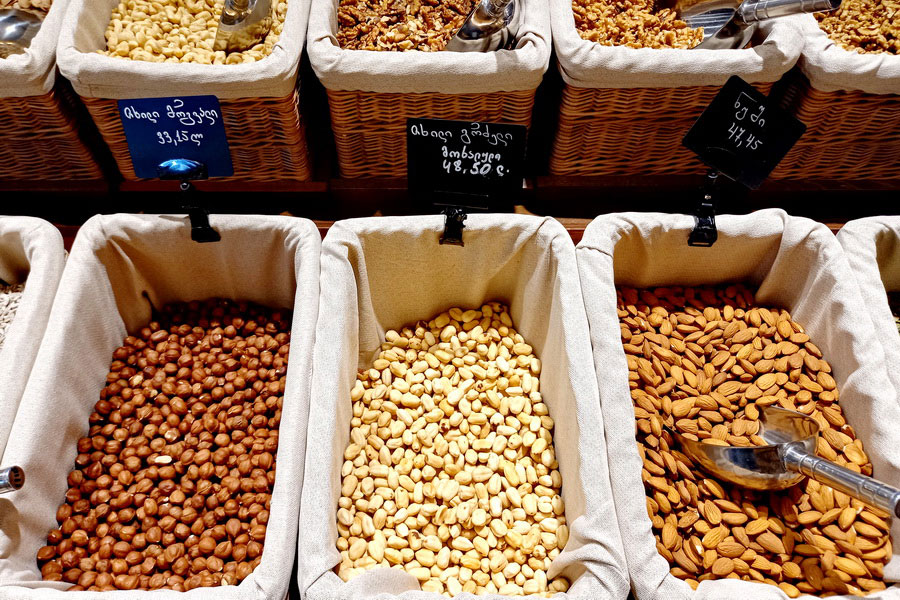 It is impossible to imagine Georgian national cuisine without nuts, especially walnuts. They are permanent components of various sauces and seasonings, and also widely used in cooking of various dished from fish, meat and chicken; they are good for vegetable dishes. Nuts are an essential component for various soups and confectionery. It is impossible to imagine the Georgian table without them.

One of the favorite Georgian dishes with nuts as the main ingredient is pkhali. This is one of traditional Georgian cold food. Another traditional dish, cooked from walnuts is flat candies in honey. The Georgians prepare these sweets on the first day of New Year. It is called kozinaki. The kozinaki cooking method is very interesting. The nuts are pan-fried to brown. Then honey and sugar, forewarmed in a saucepan, are flavored with nuts. All this is mixed then put on a panel and divided into arbitrary masses. This is the way how they prepare Georgian New Year’s sweets - kozinaki.

As far as the traditional Georgian sauces concern, then one can compile a whole book. None of Georgian dishes is served without sauces, that is why much attention is being focused on their cooking. There is an entire “subvariety” of Georgian sauces, which is named precisely as “satay sauces”. They include such sauces as garo and satsivi.