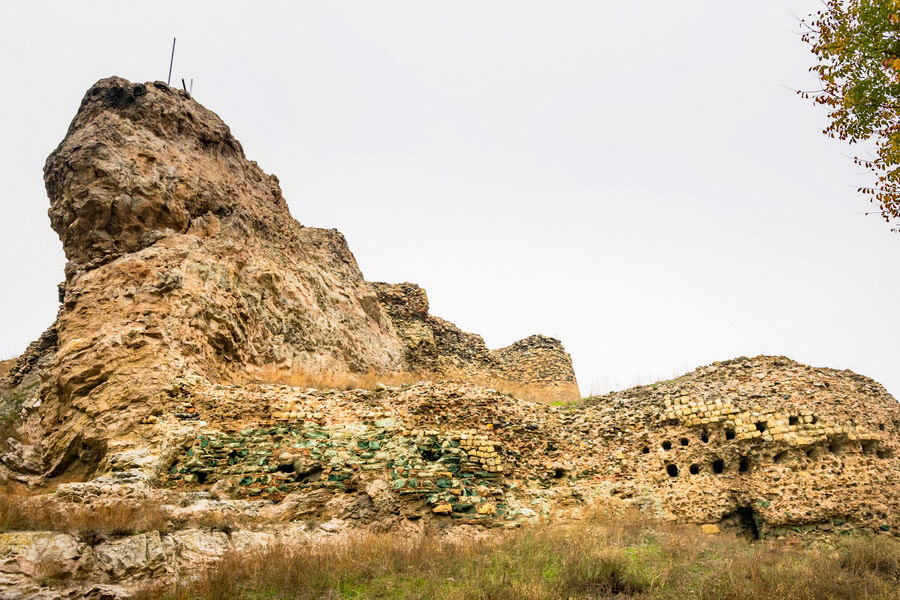 Gagi Fortress (Georgian: გაგის ციხე) is a historic citadel located in Kvemo Kartli, Georgia. Located on the cusp of the Debed River near the village of Kushchi, the fort is a half-hour drive from the Red Bridge border crossing between Georgia and Azerbaijan and a one-hour drive from Tbilisi.

Gagi Fortress was built on a rocky hill overlooking a beautiful valley, a conduit of great wealth in peacetime and an essential stronghold during war. Although the fortress is in ruins and devoid of tourism infrastructure today, a short stop at Gagi Fortress is the perfect way to encounter Kvemo Kartli Region’s centuries-old history.

Historians first began referring to Gagi Fortress in the 11th century. According to the 13th-century Armenian historian Vardan, the Armenian king Gagik I (990-1020) built the stronghold during his rule, which would explain the castle’s name. However, archeological excavations indicate that the fortification is much older, leading to the theory that King Gagik simply renovated it.

It is not surprising that many countries vied for control over the fortress due to its strategic location overlooking an important trade route. During the reign of King Bagrat IV (1027-1072), Gagi Fortress served as the land’s southeastern outpost. When his predecessor Giorgi II (1072-1089) was betrayed by the son of the feudal warlord Liparit, he was forced to relinquish Gagi Castle, yet King David the Builder (1089-1125) recaptured it for Georgia in 1120. As the first and main bastion on the road linking Tbilisi with the south, Gagi Fortress took the first hit during southern invasions, as was the case during the invasions of Khwarazmian Emperor Jalal ad-Din Manguberdi and later the Mongols.

Beginning in the 15th century, the outpost was enforced with light-colored walls and soon became known as Aghjakala (Akçakale, or White Fortress). Aghjakala was the main fort of Somkhiti, a historic region in Georgia’s present-day Gardabani and Gachiani districts. In the late Middle Ages, Gagi guarded a strategically important highway connecting Georgia with the Middle East and Iran. Iranian rulers, most notably Agha Mohammad Khan Qajar, persistently tried to capture Aghjakala, resettle nomads in the Debed Valley, eliminate Georgian feudal rule and destroy the southern roads leading to the Kingdom of Kartli. These attacks met with fierce resistance from Georgia’s kings, who managed to retain power of Aghjakala. With time, the castle’s defensive significance faded and today Gagi Fortress is only a shadow of its former glory.

Although most of the fortress lies in ruins, interesting architectural elements can still be distinguished, most notably its two distinct walls. The lower, older wall was made of evenly spaced stone blocks of equal size, while the newer, upper wall was created with small, irregular piles of flat stone. The 15th-century wall is marked by several circular towers, including a rounded citadel near the fort’s southern entrance.

Archeologists have excavated large amounts of glazed pottery from the castle’s older section which are typical of the 11th-12th centuries. Pottery fragments belonging to the Eneolithic, Early Bronze and Late Bronze Eras have been discovered on the hill nearby, suggesting that people have resided here for thousands of years.

Gagi Fortress awaits extensive reconstruction efforts and further archeological research, for there is doubtless still much to be discovered within its historic bounds.