There is a big dome of the church that can be seen on the highway Tbilisi-Batumi, 30 km away from the well-known city of Gori. If you take off the road and drive less than kilometer, you will find yourself at the Samtavisi Cathedral, that is considered the sample of the medieval architecture of Georgia and has served as a prototype for the church Kashveti in Tbilisi. Although the landmark is considered as a monastery, in fact one will find here cathedral, few minor constructions and a cemetery.

The history of Samtavisi begins in the 5th century when the first church was constructed. Its fragments are now under the floor of the cathedral. The building then had the shape of basilica. In the middle of the 6th century Assyrian Fathers, the monks spreading Christianity in Georgia, began to erect monasteries; the most well-known of them are Nerkresi, Ikalto and David Garedji. The monk Isidor Samtavisskiy who was a member of the group of Assyrian Fathers, also founded the eparchy and the monastery that still has his name of Samtavisi. 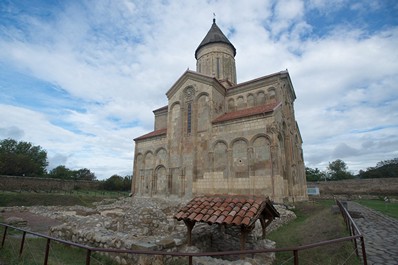 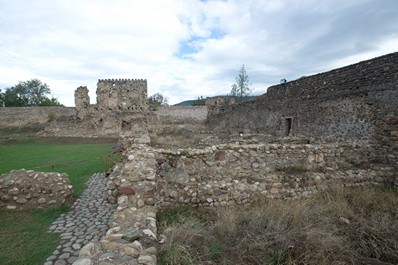 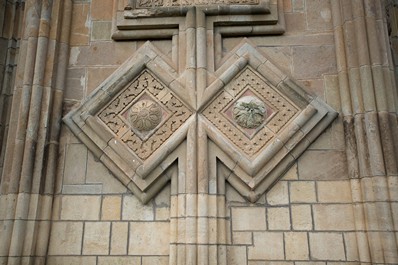 Later in the 1025-1030 present cathedral was erected on the place of basilica. The church was reconstructed several times, and in the beginning of the 16th century the dome was broken, that needed to be re-built anew. Then northern, southern and western walls of the Samtavisi cathedral were re-done, thus today one can see the patterns only on the eastern wall that were created thousands of years ago during the construction.

According to layout, Samtavisi is a cross-domed church. There are foundations of other churches and residential houses nearby. Only a bell-tower of the 18th century and a church fence have been preserved. The inner interior of the Samtavisi cathedral is rather modest, with frescoes of the 17th century that evoke great interest. There are also several icons and gravestones on the floor.

Samtavisi cathedral is an interesting sight in the surroundings of Gori, and if you are there, then we recommend you to add to your excursion two more castles of Georgian princes, located not far from the place – castles of Amilakhvari and Skhvilo.