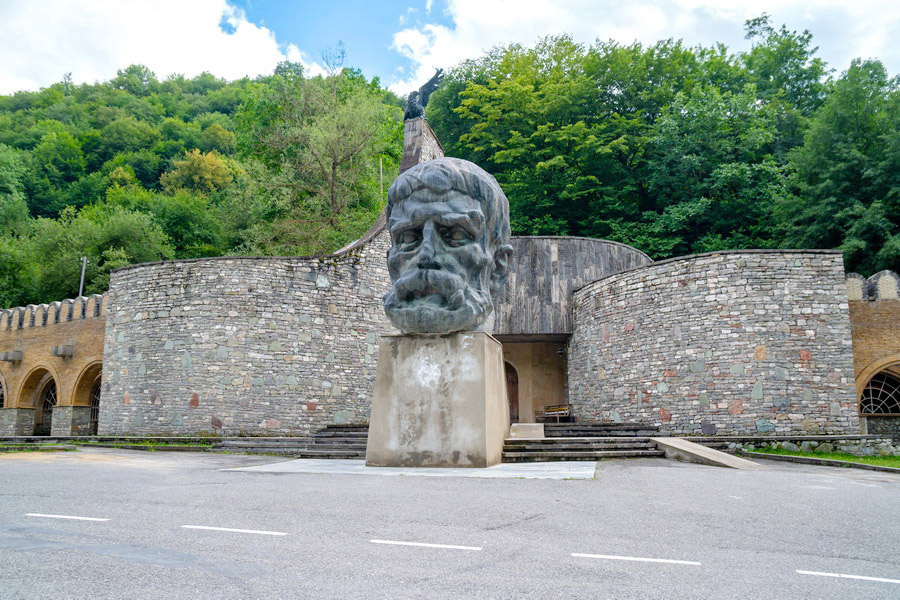 Among the picturesque mountains of the Georgian region of Pshavi, in the small village of Chargali, you will find a secluded corner, the home of the famous singer of simple peasant life – poet Vazha Pshavela. Here is his house-museum, which includes a large-scale complex with a rich collection of memorabilia related to the life and work of the poet. Another, no less important part of the museum is Vazha's home, where he lived and farmed for many years. The poet's real name is Luka Razikashvili. He took his pseudonym, which translates as "a native of the Pshavs", out of a sincere love for the free lifestyle of the mountain peoples – the Pshavs and Khevsurs.

Vazha Pshavela is a recognized classic of Georgian poetry. The metro station of the Saburtala line, as well as the avenue running next to it, is named after him in Tbilisi. A couple of minutes from the metro station there is a cozy square, the beginning of which is decorated with an impressive statue of the poet.

However, let's return to the Chargal museum. It is located on both sides of the river Charguly. Turning off the Zhinvali-Shatili highway towards the village of Chargali, after a couple of kilometers you will get to the equipped parking lot near the walls of the museum.

There is an exhibition complex on the right side of the parking lot. On the left, across the river, there is a house museum. The entrance to the exhibition complex is decorated with a huge bust of the poet. Inside there is a collection of 2000 items related to the life of Vazha Pshavela in one way or another. In addition, there is an ethnographic exposition depicting the life of the region in the XIX-XX centuries. In the halls of the museum you can see collections of the poet's works released in different years, his personal items, as well as paintings and sculptures dedicated to Vazha Pshavela and his work.

However, the main attention is usually attracted by the poet's native home. This small one-storey building with two living rooms and a covered terrace looks very organic among the greenery and against the background of local landscapes. The organizers of the museum tried to recreate the ascetic atmosphere of the life of Vazha Pshavela. Each room is equipped with a fireplace: it was impossible to do without heating in the fierce winter cold in these places. One room symbolizes the male zone of the house. Here, for example, you will see an old gun. Probably, it was his poet who took him to the mountains when he went hunting wild goats. In another room we see a spacious mortar for kneading dough and other household items. Everything looks very simple and minimalistic. The decoration of the rooms emphasizes the poet's secluded lifestyle: far from civilization, with family and household.

In the courtyard of the house you can also see a neat paddock where cattle used to be kept. In addition, next to Vazha's house you will find the grave of his son – Vakhtang Razikashvili. The poet's dwelling and the outbuilding are made of cobblestone. Inside there is a cold floor made of rough stone. Probably, earlier it was covered with modest carpets or animal skins.

The house of Vazha Pshavela has a truly charming atmosphere. There is peace and tranquility here. Fresh air, birdsong and the very ascetic, but immaculately decorated dwelling of the poet will allow you to go back a hundred years and imagine the measured course of life in the mountainous Georgian hinterland.

In his work, the poet developed socio-ethnographic themes. He did not want to live in the city and sang the life of the highlanders with love. At the same time, his works reflected the conflict between old and new foundations, which was brewing at the junction of the XIX and XX centuries.

In addition to poems that were written using the local dialect, Vazha Pshavela created works of art written in the traditional framework of the literary Georgian language. Poetry, on the contrary, had a more lyrical and sublime character.

Vazha Pshavela is buried in the Tbilisi Pantheon on Mtatsminda Mountain.