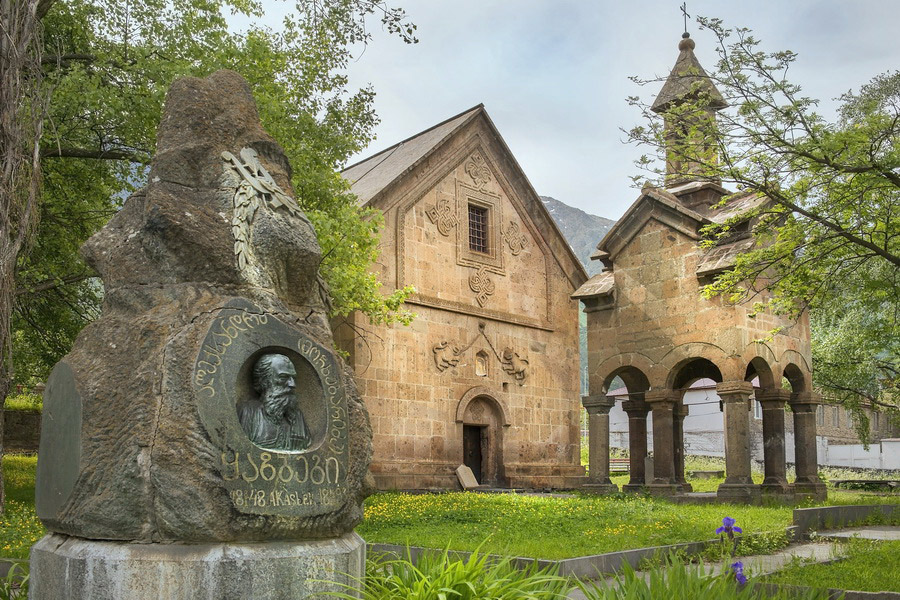 The Alexander Kazbegi Museum of Local Lore in Stepantsminda is a museum on the Georgian Military Road, which is definitely worth a visit! Here you will have an exciting immersion in the history of the region and get acquainted with the biography of the famous Georgian writer Alexander Kazbegi.

In the museum you will see numerous copies of Georgian national clothes and weapons, old photographs, books and finds discovered during archaeological excavations. The museum building includes 2 floors. On the first of them there is a local history exposition and exhibits telling the history of the Gergeti Church, as well as chronicles of the conquest of Mount Kazbek. The second floor of the museum is occupied by personal belongings, paintings, manuscripts and interior items from the cabinet of the Georgian writer of the XIX century Alexander Kazbegi.

Alexander Kazbegi and His Role in Georgian Literature

The village of Stepantsminda was the writer's native home. It was here that he went through the stages of his personal maturation at a very young age. Being the heir to a rich noble family, young Alexander quickly realized how hard the life of serfs was. Having done his best to facilitate their daily life, the future writer went to the mountains to graze cattle in order to become even closer to the people.

The works of Alexander Kazbegi are devoted to the description of the life of mountain peoples. At the same time, his stories reveal the theme of conflict with traditional social rules and norms. One of his most famous works was the story "The Parricide". According to one legend, Joseph Stalin admired the creations of Kazbegi and took the nickname Koba, inspired by the character who bore this name. The hero of the story was a savior of the oppressed, a noble man who defended ordinary peasants. The works of Alexander Kazbegi have been published many times not only in Georgian, but also in Russian.

Treasures of the Bethlem Cave

The fact of the existence of the Bethlem cave remained in question for a long time. And all because it is located in an incredibly inaccessible place: almost at the top of Mount Kazbek, at an altitude of more than 4000 meters above sea level. The cave was mentioned in ancient writings. So, it is mentioned in the famous collection of Georgian chronicles "Kartlis Tskhovreba". According to this historical document, warriors from the Khevi region hid the treasures of Queen Tamar here. However, until the middle of the XX century, no one knew about the location of the cave. In 1948, a group of Georgian climbers discovered and explored a cave, which, by the way, was carved into the rock at an altitude of more than 350 meters from its base. The cave was noticed thanks to the gates and a long iron chain hanging from them. A throne, church books and utensils, coins and other items were found inside the Bethlem cave. The gates themselves, dating from the X-XI centuries, are well preserved, and now they represent, perhaps, the main value of the Local History Museum in Stepantsminda.

The museum building itself previously belonged to the family of Alexander Kazbegi. The architects note that the structure stands out for its stone columns. It is worth noting that in Georgia during the XIX century it was not customary to decorate balconies and terraces with stone columns: wood was usually used. That is why the building is valued for introducing innovative ideas into the architecture of Georgian noble estates.

On the territory of the museum you will also find the grave of the writer himself with a monument installed above it.