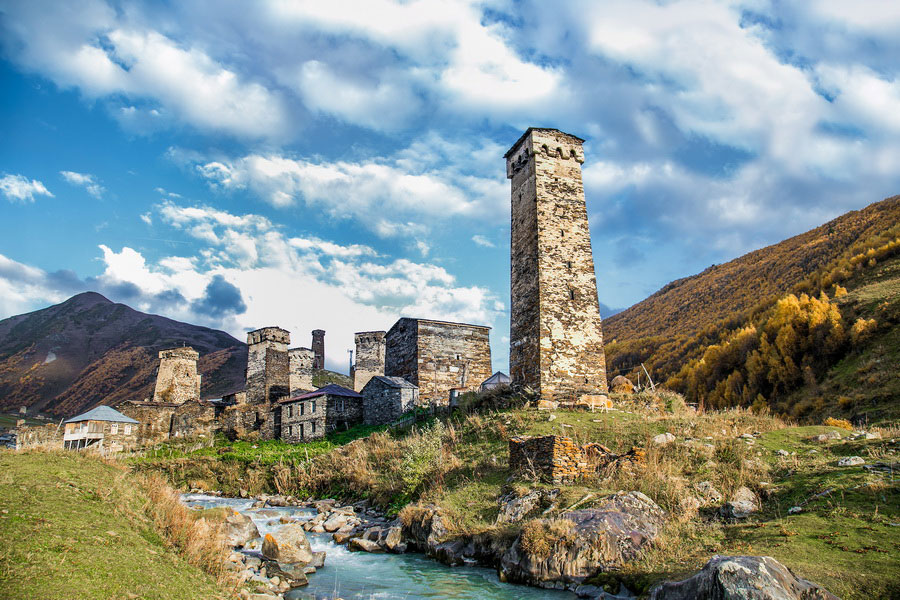 Ushguli is one of the high alpine communities in Europe located at a height of 2200 meters above the sea level. It is situated 33km to the east of Mestia in a hard-to-access area. It takes around 8-10 hrs (400km) to get there from Tbilisi through canyons and cliffs.

The community includes four ancient settlements: Zhibiani, Chvibianu, Chazhashi and Murkmeli. They are located in the upper reaches of Inguri river, at the southern foot of the giant mount Shkhara (5193m), the highest point of the Caucasus range. Most of architectural monuments date back to the 9-10th centuries. From all sides, villages are surrounded with glaciers and snow-capped mountain peaks. The landscape naturally creates grandeur as if painted by a skillful master.

There are about 70 families (approximately 300 people) permanently residing in Ushguli. They have a school, few shops, café and (drumroll) 5 churches: Lamaria church (Mother of God from Svani), church of St. George in Zhibiani, Church of St.Barbara in Murkmeli, Church of Spas in Chvibiani and Zhibiani.

How to explain such a high concentration of sanctuaries in one place? The answer is in difficult natural conditions that locals live in. Practically six months a year, from November to April, Ushguli residents are isolated from outer world due to snows that do not allow driving through winding roads even on utility vehicles. When beauty and peace is around you, time loses its power. In such conditions people are drawn to philosophy and think of eternity.

Svans are a unique nation with their language, culture, traditions differing from the rest of Georgia. From olden days, all they did was hunting; they never did farming or cultivated grapes, thus you will not find loud gatherings like in other winemaking regions of Georgia. Everything here is concise, modest and ascetically strict.

Medieval rock towers, spread on the entire territory of the community, are the face of Ushguli. The most ancient of them dates back to the 9th century A.D. They are covered with stone plates and there are many of them. Before, every family had its own tower that served for the defense of the settlement. They say that Ushguli comes from Georgian phrase “ushishariguli” meaning “fearless heart”. It is one of few places that has never been conquered.

Another attraction of the community is the Lower Chazhash castle with several semi-damaged towers and Upper Chazhash castle that according to legend, has once been a haven for Queen Tamara, highly respected in these places.

Architectural complex Ushguli is a unique cultural-historical ensemble and has been classified as UNESCO World Heritage Site.