Zhetysu is a beautiful land. It is fed by the rivers originating at the tops of unique mountains: thousands of streamlets, just like pearl necklaces, merging in a uniform stream, turn this land  into a perfect oasis.

The nature of the region is unique. During one day a traveler, without taking a lot of time and applying many efforts, may cross practically all landscape zones - from desert up to eternal snows.

In foothills and mountains grow different kinds of arboreal and herbaceous plants, dozen types of animals inhabit here, including magnificent snow leopard. In the bottom flange of mountains, up to 600 meters high, the attentive traveler will enjoy the greenwoods, above he will notice a steppe girdle, and on valleys of the rivers - apple - aspen woods with an admixing of bird cherry trees, hawthorns. The fauna of the land is diverse. Here one can meet hares, ground squirrels, hamsters, badgers and even brown bears. On high mountains it is quite probable to meet mountain goats, archers, gray ground squirrels. Birds have taken a fancy to aboriginal woods: a pecker, a cedarbird, an owl, a kinglet, mountainous jackdaws, mountain partridges, and pheasants. 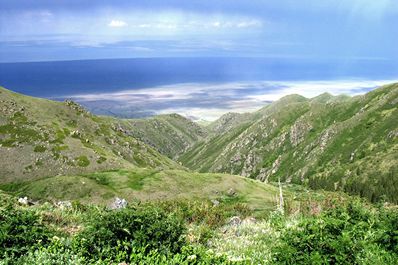 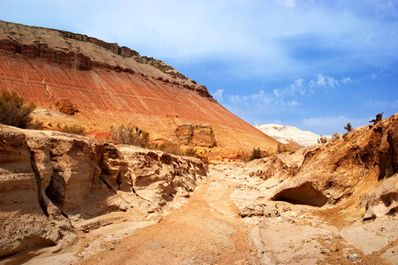 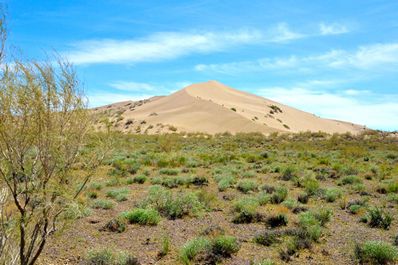 It is good to come to be in Prybalkashje in the middle of May. Spring is the time of blooming poppies, and steppe is in red colour -it is an astonishing view. Curious hares and ground squirrels run across the road, cranes fly up in the sky, pheasants wander in bushes, musquash floats in lakes... And it is difficult to believe that soon this landscape will be replaced with hot burnt steppe.

It does not matter which village of Rajymbek area you visit, you may always see around inexpressible beauty of mountains. It is beautiful here in the winter and it is also wonderful in the summer. Eagles freely soar above the ground, remarkable birds fly...

Have you ever seen a magic smooth surface of a grand miracle of the nature - Alakol lakes, where great Kabanbay batyr watered his horses, on coasts of which his fearless warriors had a rest before conclusive fight? If no then you lost much in this life. You should go and have a rest on Alakol Lake that is located in the area of the same name and in translation from Kazakh language means "motley lake".

Legendary exploits of Rajymbek batyr take special place in the memory of people; he struggled against dzhungarian conquerors. People have erected a monument to him in Kasensaj place in 1997. The area has received the name in honour of a famous warrior. 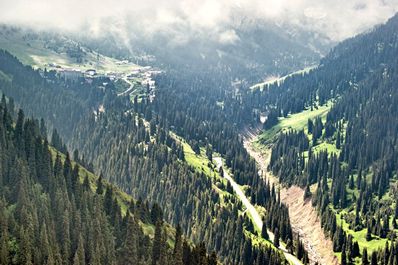 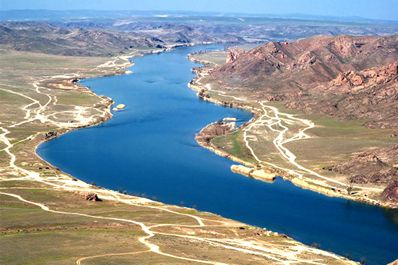 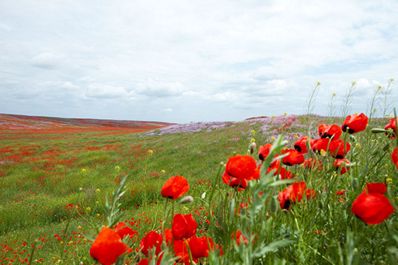 The history of our land is astonishing. Historical roots of Zhetysu trace back to centuries; this ground is considered to be the heart of cultural life of Kazakhstan. This land has rich traditions. It has been named as “the world of songs and poetry” in the age-old times. One can endlessly list well-known singers, founders of kujs, akyn - improvisators, whose invaluable musical compositions have brought in a considerable mite to the culture of our republic. The burial place of the man in "golden clothes" is Issyk barrow, and the most remarkable complex of things in encrusted style was found in Kargaly gorge near Almaty with burial dating back to 3rd-2nd  centuries B.C.

The unique creation of a nature is Chanting Barchan, which towers on the right coast of Ily river. In summer, during the windy weather, the mount revives and begins to emit potent continuous buzz. It is interesting, that the barchan does not wander on a plain, and remains on its place during millenaries.

Kerbulak area, which is nearby to Altyn-Emel pass, is famous for that the eminent explorer of Central Asia, a great educator, ethnographer, scientist-orientalist Shokan Ualihanov, has found his last shelter here. In the memory of the son of Kazakh people an architecturally memorial complex was constructed on the territory of the area.

Kapchagai water basin is a favourite place to have a rest of Almaty, Taldykorgan and regional inhabitants. Aquapark unique sport water complex was opened in 1993, which was constructed according to the design of Italians. Adventure-seekers climb over a 10 - meter tower, a water mount "Shivoli" or an unusual attraction "Tarzan". Up to 5,000 persons per day visit the aquapark in summer.

On the territory of Almaty region there are the richest deposits. These are the huge stores of coal in Nizhne - Ily, Kolzhat, and Ojkaragaj deposits. Nizhne - Ily station "Podzemhaz" can produce gas from coal, which costs much lower than natural gas received from Uzbekistan.

There is an opportunity to revive gold mining branch, which prospered in terrain of region in epoch of copper and bronze centuries. The Asian Scythians made marvelous jewels from the gold extracted here. Herodotus wrote exactly about them in the 5th century B.C.: "... everything that is required for spears, arrows and poleaxes they make out of copper, they decorate their headdresses, girdles and cross-belts with gold".

The potential of gold mines in Almaty region is estimated by geologists to be several hundreds tons. There are manganese ores, schungites, platinoids and so on in Almaty region.

One of the main components of economic complex of Almaty region is agriculture. In fact only in the settlements officially related to countryside there are more than 70 % of the population. According to the majority of indicators the region strongly holds leading place among agrarian regions of the country.

On our territory of the mounts and the rivers everyone can find something pleasant to him or her. Zhetysu land hides in itself a lot of attractive things to those who likes to wander and aspires to recognize the world; it will not leave indifferent even the most exacting traveler. The rest on our land is always of a high-grade and full, trips are fascinating, and the impressions are indelible.