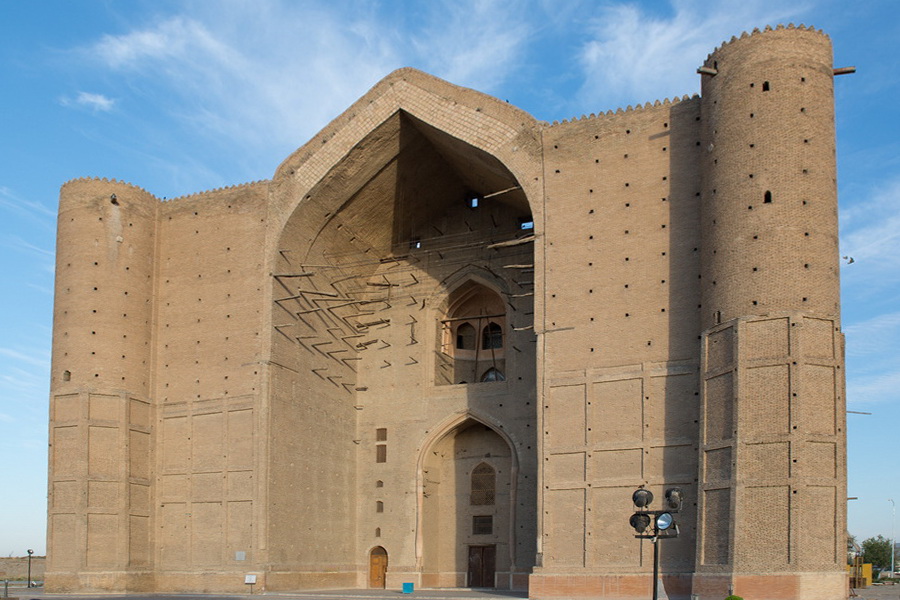 Kazakhstan is a land of ancient civilization. From remote times its inhabitants, the ancestors of the present-day Kazakhs, were creating a unique and original culture. Some outstanding monuments of their cultural heritage have survived in the form of burial mounds, settlements, fortifications, mausoleums and even whole towns.

Khoja Ahmed Yasawi Mausoleum in Turkestan (up to the XVI century Yasi city) in Southern Kazakhstan is unique among them.

It's positioning provided for lively trade. China exported porcelain, Persia – Asian tiger skin, gold and silver ware, Byzantium – all kinds of women fabrics. Caravans leaving for Russia took astrakhan – the matchless treasure of nomad Turks, colored Turkestan glass (it were Turks who taught its manufacturing to Chinese people), thin silk, cotton seed. Daily Turkestan saw the sale of more than 500 camels. The skin of a lynx was equivalent to 5 sheep, horn of a Siberian deer cost as much as silver. In XV - X centuries Turkestan was the residence of Kazakh Khans.

In his sermons Khoja Ahmed Yasawi urged people to be good and taught them to despise greed and cupidity. His poems enjoyed great popularity, they were learnt by heart and were chanted far beyond the bounds of Desht – and- Kypshak. The poet's fame grew year by year. His poems entered the world cultural treasury.

Legend has it that as a token of mourning for the dead prophet Mohammed, whom the poet regarded as his teacher, Khoja Ahmed Yasawi, having reached sixty- three, the age at which the prophet died, moved to a subterranean cell near the mosque and spent the rest of his life preaching there. He died in 1166/67 and was buried with great honor in a small mausoleum erected for him, which subsequently became a place of mass pilgrimage and worship for Moslems. If a man visited this mausoleum three times it stood for Hadj to Mecca.

The present Mausoleum was erected 233 years after his death under the order of Timur. In 1389, 1391, 1394, 1395 in numerous bloody battles Timur destroyed the power of the Golden Horde and set fire to its capital the town - Sarai-Berk, and in honor of this victory that he decided to build a new, grandiose memorial complex on the site of the old mausoleum of Ahmed Yasawi, which was by then somewhat decrepit.

Timur was guided not only by pure religious considerations. By this act he was raising his authority, asserting the idea of the inviolability of his power. Every kind of sources state that Timur took part personally in drawing up the design for the future mausoleum and gave instructions to his builders.

The complex of Khoja Ahmed Yasawi consists of a huge, rectangular building with portals and domes. In ground plan it measures 46,5 x 65,5 meters. The thickness of the outside walls is 1,8-2 meters; and the walls of the central chamber are-3 meters thick. The building has an enormous portal and a number of domes. Around its central chamber are more than 35 rooms for various purposes.

Kazanlyk (the copper- room) has the largest extant brick dome in Central Asia and Kazakhstan with a diameter of 18,2 meters. Kazan for Turks was the symbol of unity and hospitality. That's why special significance was attached to its size and exterior. Turkestan kazan has no second to it. Its diameter-2,45 m., weight -2 tons, it is made of the alloys of 7 metals. The construction material for the halls of the Mausoleum is clinker. The technological purity of its production was perfected. The facing of the north portal is exceptionally beautiful. The door of the burial- vault is carved and decorated with fine ivory incrustation. According to its size, Khoja Ahmed Yasawi Mausoleum is equal to Bibi- Khanym mosque of Samarkand (Uzbekistan). Currently Turkestan is a place of mass pilgrimage for tourists all over the world, who come to see the matchless masterpiece of medieval architecture – Khoja Ahmed Yasawi Mausoleum.