Irkeshtam is approached from Osh, the second city of Kyrgyzstan, in the South of the country. The road travels south along the valley of the Taldyk and Gulcho river gorges to the village of Sary Tash (“Yellow Stone” in Kyrgyz), which sits on a cross roads.

This stretch of road is infamous for road accidents. It is asphalt until you reach Sary Tash, and then becomes a stone road and although the scenery is spectacular – with snow capped peaks on one side and green mountain meadows on the other – traveling along the road is slow and can take a long time – especially if you encounter a broken down vehicle which clocks the road. On the Chinese side, the road down to Kashgar is better, but still difficult. 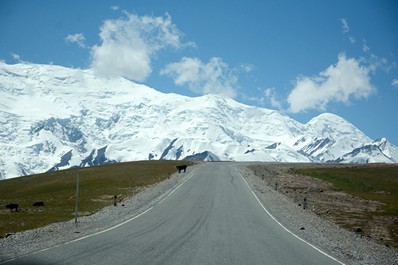 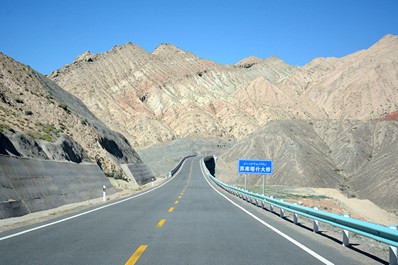 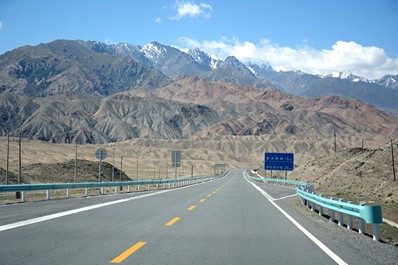 As the shortest route to China from the Ferghana valley in Uzbekistan and Tajikistan there has been a lot of interest in repairing the road – which would take about 6 years to complete – including a TACIS funded project. The work came to a stop after armed insurgents threatened the stability of the region in 1999.

In Soviet times, China was seen as a real threat and this was reflected on the border. Now the two countries are allies and relationships between the respective border troops are friendly.

The border post is named in honor of a frontier border guard, Andrei Bescennov, who was killed in a clash with the Basmachi rebels in 1931. Until the end of 1999 it was manned by Russian troops – who, apparently took all their equipment when they left. The post is now manned by border guards from the Osh oblast. It is not an easy posting. By all accounts, the guards are not fed well but no-one has died of hunger. However, a year’s service here is counted as equal to two year’s military service elsewhere.

In this mountainous region, as in Kyrgyzstan generally, horses play an important role in daily life. The lack of roads means that soldiers who patrol the border ride the local breed of Kyrgyz pony, which are renowned for being sturdy and well suited to this sort of terrain. The post also boasts a number of dogs, including German shepherds and a number of mongrels.

The pass lies some 238 km from Osh and 250km from Kashgar. Chang Chien is sometimes credited as the first person to cross in 128 BC when he entered the Ferghana Valley on a diplomatic mission from the then emporer of China, in seach of allies against their mutal enemies the Xiongnu. In 1893 the horse path between Osh and Ishkertam was widened, fortified and developed. It was even named "a wheel road", though the goods used to be transported on pack animals: horses, donkeys and camels.

For a long time the Irkeshtam pass was open only for commercial goods traffic for a limited period each month, although for several years there were plans to open it for passenger traffic and these finally came to fruition in the summer of 2002. Technically, no permissions are needed to cross the border here but it is still a sensitive border zone. Also its remoteness means that transport probably has to be arranged on both sides of the border – which means that, once again, it is not a cheap border crossing. There is a Chinese bus service.

At the post there are places to eat a few other facilities. The Chinese immigration post is housed in a large, new, purpose built building, three kilometers from the border – and it is another three kilometres to the Kyrgyz post. As with Torugart, you are not allowed to walk across this no-man’s land. This can be a problem because Kyrgyz vehicles and staff are currently (August 2003) not allowed to cross either … (In 2003, an agreement between the Chinese and Kyrgyz governments imposed a visa regime for the citizens of each country to visit the other. As a result, technically, drivers and guides need a Chinese visa to pass through Immigration and Customs.

Unlike at Irkeshtam Pass, at Torugart Pass there are currently (August 2003) special agreements allowing tourists travel between the posts and borders . The hours of operation are restricted and there is a long lunch break (which can last three and a half hours).