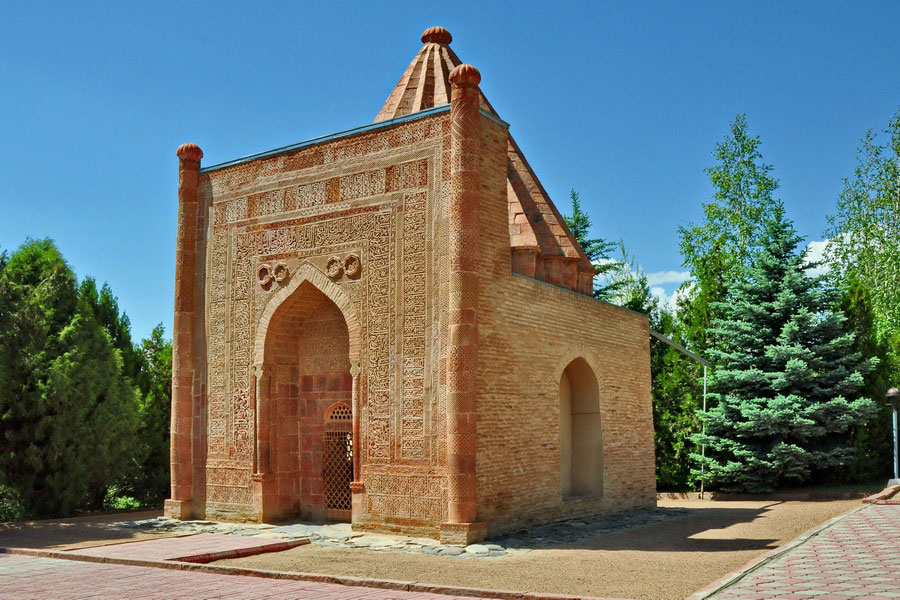 Legend says that Manas Ordo, in Talas Province, is the final resting place of the great warrior and Kyrgyz hero. The mausoleum is on the bank of the Kenkol River, near where it meets the Talas River, and is not far from an ancient burial ground. In The Epic of Manas, the hero Manas is from Talas, so it makes sense that he is buried there.

The mausoleum looks similar to other monuments from the 14th century, with kufic script around the outside edge of the monument. There are several religious declarations, along with a description of the person buried in the mausoleum: “This is the majestic mausoleum of the virtuous, chaste, modest and most glorious of women, Kenizek-Khatun, daughter of the emir Abuka..”

Legend has it that Manas’s wife, Kanykei, ordered a different inscription to be put on the tomb. When Manas was alive, there was a tradition of enemies coming and destroying burial places, so Kanykei put a woman’s name on the mausoleum to confuse Manas’s enemies and preserve his burial place.

Indeed, when archaeologists opened the tomb, they found the skeleton of a man who was about 2 m tall (6.5 feet), not the skeleton of a woman. Academics and experts took this to mean that Manas Ordo was indeed the tomb of the legendary warrior, and not of the princess mentioned in the tomb’s outer inscription.

While there are still skeptics that say that Manas was not buried in this mausoleum, the site has nonetheless become a popular destination and an important spiritual site in Kyrgyzstan.