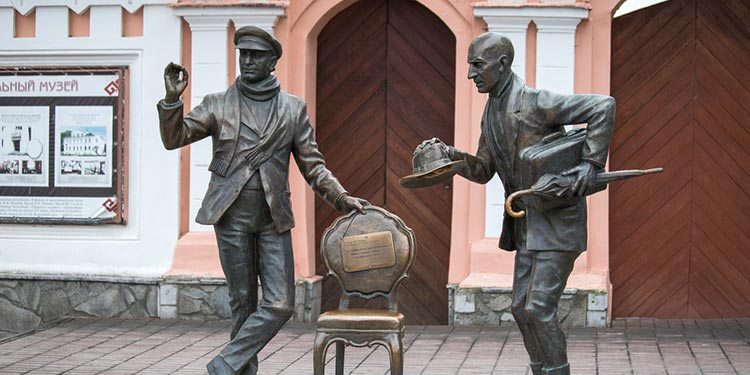 Monument to Ostap Bender and Kisa Vorobyaninov in Cheboksary

Tours, Attractions and Things To Do in Cheboksary

Cheboksary (Shupashkar) is the capital of Russia’s Chuvash Republic and the industrial and cultural center of the Volga Region. This welcoming, original city is a true tourist gem which is known for pleasantly surprising those who discover it for the first time.

The city is located along the Volga River at the mouth of the Cheboksary Reservoir. The earliest known mention of the city is found in the writings of ruler Ivan Runo in 1469, yet archaeological finds suggest that Cheboksary was founded in the 13th century by Suvar-Bulgar immigrants from Volga Bulgaria, a region now located in far-west Russia.

The city's development began in 1555 when Archbishop Guriy visited it on behalf of Ivan the Terrible. Guriy outlined its boundaries and consecrated the future site of the Cheboksary Kremlin, a strategically important fortress in this southern outpost of the Russian state. Construction of the Kremlin gave impetus to further development of Cheboksary, which continued unabated until the mid-17th century. The completed Kremlin encompassed the ruler’s courtyard and home, as well as a treasury, prison, churches, and the houses of nobles, clergy and an influential class of elite soldiers known as streltsy.

Apart from brick stoves, Cheboksary was completely constructed from wood. It was ravaged by fire on numerous occasions, and the Kremlin itself was not spared from destruction. In 1704, city officials made the decision to not restore the destroyed Cheboksary Kremlin, and the only vestige of the fortress which has survived to our day is the stone Vvedensky Cathedral.

During the 17th century, a flurry of construction of stone buildings commenced in the city. Despite its strategic location, the city was never a provincial center and was instead placed under the jurisdiction of Kazan Province.

As the 17th century drew to a close, Cheboksary had lost its significance as a defensive outpost and instead became famous as the craft, trade, and cultural center of Volga Region. Catherine the Great, after visiting Cheboksary in the mid-18th century, wrote: "For me, Cheboksary is better than Nizhny Novgorod in every regard." In 1773, the city suffered another devastating fire which caused irreparable damage. By order of Catherine the Great, an urban development plan for the restoration of the city was drafted, which led to Cheboksary’s appointment as the first district city of Kazan Province.

During this same period, industrial production increased in Cheboksary as many brick, leather and bell factories were built. Even today, Cheboksary bells are admired throughout the world. Influential merchants who funded the building of factories and other city enterprises played a vital role in the city’s development at this time. Today, the family mansions of these merchants still beautify the city, invoking admiration in visitors and pride in Cheboksary residents.

As goods began to be transported by rail in the 19th century, the Volga River lost its significance as a trade route. The newly laid rail lines did not pass through Cheboksary, and this loss dealt a huge blow to the status and economic stability of the city.

Everything changed in 1920, when the Chuvash Autonomous Region (Chuvashia) was formed and Cheboksary was established as its capital. As the city population began to increase, institutes of higher learning, a national theater and the city’s first sound theater, Rodina Cinema, were opened. Incidentally, the first film that was screened was “Chapaev”, based on the life of war hero and Cheboksary native Vasily Chapaev. The commander is widely commemorated in the city, with a museum, monument, streets and villages named in his honor.

In the post-World War II years, Cheboksary continued to experience industrial development, most notably with the completion of Cheboksary Dam in 1978. New residential neighborhoods were built to accommodate the growing population, and Cheboksary was twice recognized as the most comfortable city in Russia.

In less than 70 years, its population has grown to approximately half a million people, and today Cheboksary encompasses an area of 250 square kilometers. As the majority of the people are ethnic Chuvash, visitors will hear both the Russian and Chuvash languages spoken in Cheboksary.

When arriving to Cheboksary via the Volga, guests are greeted by a new well-maintained river port which is unequaled in all of Russia. From the riverbank, buildings from different eras of Cheboksary’s history are visible. The most notable of these hail from the 17th-18th centuries and include Vvedensky Cathedral (the city’s first stone building), Trinity Monastery and Assumption Church. Other city attractions include Suvar Ethnocultural Park and the most recognizable symbol of the city, the 46-meter-high Monument of the Patron Mother. Visitors who are interested in local Chuvash culture will also appreciate Chuvash National Museum and the city’s various art and national craft museums.