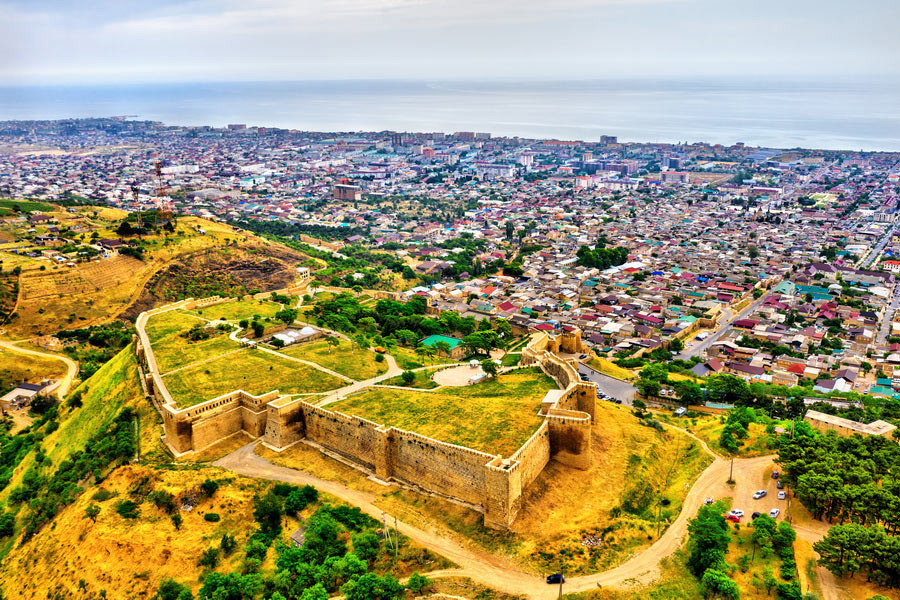 Tours, Attractions and Things To Do in Dagestan

Dagestan is a republic that is part of the Russian Federation and located in the south of the European part of the country. Dagestan borders with Georgia, Chechnya, Azerbaijan and Kalmykia.

The capital of Dagestan is the city of Makhachkala. In total, Dagestan includes about 30 large settlements, most of which are cities, as well as dozens of small villages. Dagestan is home to a little over 3 million people, while in the most populous city of the republic – Makhachkala – a little more than 600 thousand inhabitants.

Dagestan is famous for its rich history and well-preserved architectural monuments. There are also attractions in the republic that are included in the UNESCO World Heritage List.

Primitive sites on the territory of modern Dagestan were 2.3 million years ago. Academician Nikolai Vavilov said that this territory was part of the origin of cultivated cereals.

At various times there were the Sioni-Tsopi-Ginchi culture (V millennium BC), the Kuro-Arak culture (IV-II millennia BC), Assyrians (IX-VIII centuries BC), Albanians (II century BC), Persians (IV century) and Khazars (VI century).

The most ancient city of Dagestan is Derbent. This territory was mentioned in the VI century BC, and the first city was founded in 438 BC. Once the caravans of the Great Silk Road passed here.

In the VII century, the territory of modern Dagestan was captured by the Arabs and brought Islam to these lands. To this day, it is the dominant religion in the republic. Islam is practiced by more than 80% of the population.

In the middle of the XVI century, Ivan the Terrible married the Kabardian Princess Guashan, which served as the birth of the military-political union of Dagestan and Russia. After 40 years, the Russian-Dagestan war began, which Dagestan won. But already in 1860 Dagestan finally became part of the Russian Empire.

In 1970, a strong earthquake occurred in Dagestan, as a result of which many settlements were partially or completely destroyed, including Makhachkala, Khasavyurt, Kizilyurt and other cities.

After the collapse of the USSR, Dagestan became a republic within Russia. Dagestan has a president, as well as a national flag, coat of arms and anthem.

In 1999, a serious military conflict began in Dagestan. And there was unrest in the republic until 2010. Today Dagestan is a popular tourist destination. 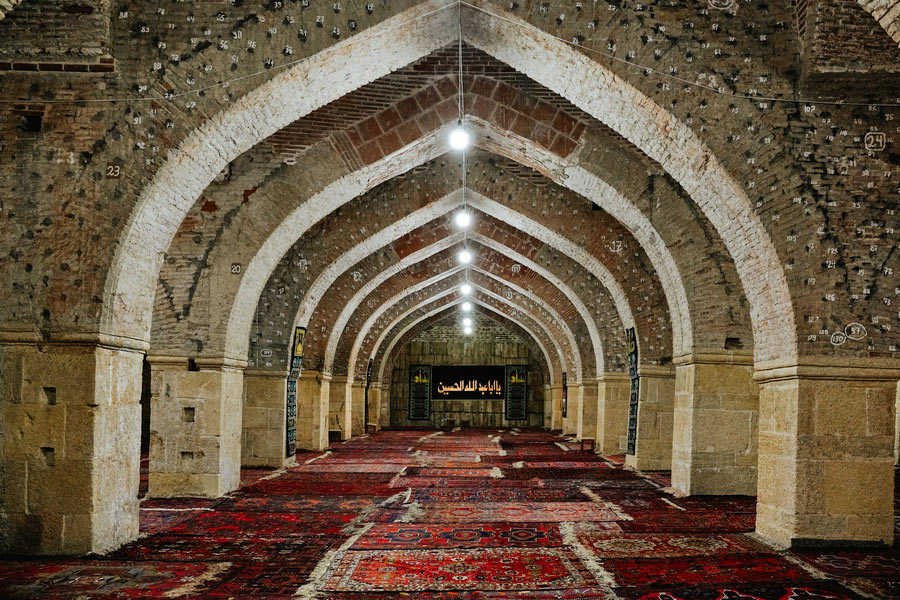 Due to the fact that many nationalities live in Dagestan, the republic is famous for many unique attractions. The main historical and architectural monuments are located in the most ancient city of Russia – Derbent, as well as in Makhachkala.

Naryn-kala is an ancient citadel located in Derbent. Its construction began in the VI century, and the last major changes were made in the XVI century. Naryn-kala is included in the UNESCO World Heritage List. The citadel stands on a hill that adjoins the sea. The fortress walls of Naryn-kala went straight into the Caspian Sea. Within the walls of the citadel there was a palace, a mosque, a temple, a prison, towers and gates. About 250 architectural and historical attractions have been preserved on the territory of the fortress.

Derbent Fortress is the oldest landmark of the city. It is older than Naryn-kala by several centuries. Scientists claim that the Derbent fortress existed before our era. Moreover, Naryn-kala was part of the Derbent fortress along with the 40-kilometer mountain wall of Dagbar. There is also a hypothesis that Derbent got its name from this fortress – "darband" means "closed gate" in Persian.

The Sarykum dune, located near Makhachkala, is the largest sand dune in Eurasia. From the Kumyk language "sarykum" is translated as "yellow sand". The dune has a 3-kilometer length and an area of 600 hectares. This is not a manmade dune. Scientists say that Sarykum appeared several million years ago as a result of winds that brought sand here. Every year Sarykum is modified by gusts of wind, but at the same time remains in the same place. Please note that this is the hottest place in Dagestan, the air temperature in summer exceeds 60℃. It is better not to go to the dune without guides – there are many wild animals and the most venomous snake in Russia – gyurza.

Fatali Khan's Winter Palace in Derbent was built in 1766. Once it was a magnificent two-story building with many mirrors, a swimming pool, fountains and an amphitheater. Already in 1806, the palace began to decline. In the middle of the XIX century, Russian soldiers lived here. Today, only the entrance portal and several walls remain of the palace. There is a museum here, where weapons, jewelry, dishes and clothes of the XVIII century are exhibited.

The Juma Mosque in Derbent is one of the oldest in the world and the oldest in the CIS. It was built in 733. At that time, the mosque, which was 68 meters long and 28 meters wide, was the largest building in Derbent. This mosque, built before the Arab conquest, has an entrance from the south side, and not from the north, as is customary among Muslims. In 1369, the mosque was badly damaged during an earthquake. In the XV century, a spiritual educational institution for men was built under her – a madrasah. In the XIX century, the mosque was expanded, and four plane trees were planted on the territory. Today, century-old trees can be seen from almost anywhere in Derbent.

The house of Peter the Great is a famous dugout in which the emperor stayed in 1722 for one night. Almost nothing remains of the two-room building. Today, a museum complex has been built around it, leaving the walls of the dugout untouched. The museum displays exhibits of Peter the Great: maps, documents, clothes and much more.

The Makhachkala Lighthouse is one of the most iconic attractions of the capital of Dagestan. It was built in 1866. The red and white 27-meter tower is a favorite place for photo shoots not only among tourists, but also among local residents.

The Upper Bazaar of Derbent and the Second Market of Makhachkala are the most famous markets of Dagestan. Here you can meet colorful residents and buy food and souvenirs. Don't forget to bargain.

We recommend nature lovers to visit the Samur Nature Reserve with a unique liana forest, Khanag (Khuchninsky waterfall), Gimrin Gorge, Karadakh gorge, Mekeginsky Canyon, Ar-Gel Park, Kezenoyam Lake, Tlilimeer plateau and Tarki-Tau, Addala-Shuhgelmeer and Diklosmta mountains. It is also worth seeing the Tobot Waterfall, the Khuzan Plateau, the Stone Bowl, the Irganai and Chirkeyskoye reservoirs, the underground Saltinsky waterfall, the Kuzhniksky natural bridge and the Sulansky Canyon. The latter is considered one of the deepest in Europe. Also take a look at the city beach of Kaspiysk and Izberbash beach near Makhachkala. If you are in the area of Darkdag Mountain, which is not far from the village of Khustil, we recommend visiting the sacred Durk cave. Here is the sword of the famous commander Maslama, who was an adherent of Islam. Mount Shalbuzdag, located in southern Dagestan, is covered with secrets and legends. There are six special places here: Lake Zem-Zem, the sanctuary of Suleiman, a place for making wishes, the Ehrenler Feast, the golden Ehrenler and the "sinometer", which can clamp sinners.

Religious researchers will be pleased with the Armenian Church of St. Amenaprkich (the Savior) in Derbent, built in 1870, as well as the only Orthodox church in Derbent – in honor of the Intercession of the Most Holy Theotokos. The central mosque of Makhachkala, the Assumption Cathedral, built in 1890 in Makhachkala, the largest synagogue of the Caucasus, Kele-Numaz, the Muslim shrine of Kala-Koreish, the Albanian church of St. Gregory in Nyugdi and the ancient temple in the mountains will not leave anyone indifferent.

Unusual architecture can be seen in the ancient mountain village of Chokh. Here the houses literally stand on top of each other. The longest road tunnel in Russia – Gimrinsky – will surprise with its scale. Its length is 4303 meters. It is also worth seeing the Derbent lighthouse, the ancient Kirkhlyar cemetery and the Akhtyn fortress of 1839. Take a look at the famous Gunib fortress in the village of the same name. The walls and the famous "Shamil's Gate" have been preserved here. The watchtowers of the XIV-XVI centuries, located near Itsari, will tell about the life of medieval inhabitants. For example, only rich people lived in such towers. There were cattle pens on the two lower floors, the owners lived on the third, and the upper levels were reserved for the newlyweds. The medieval fortress of seven brothers and one sister, located near the village of Khuchni, will amaze with its scale.

Be sure to visit the villages of Kahib, Goor, Botlikh, Untsukul, Dubki and Zubutli. Special attention should be paid to the fortress-the village of Kala-Koreish. The village has been standing on a high mountain since the VII century. It was from here that Islam began to spread in Dagestan. It is said that the village was founded by relatives of the Prophet Muhammad. There is an ancient mosque of the IX-X centuries. In Dagestan villages, you can see how the indigenous people live, taste national dishes, as well as spend the night with hospitable people who will definitely feed dinner and tell interesting stories. Also take a look at the village of Kubachi, which has been known since the V century. Hereditary craftsmen who make weapons, jewelry and wooden products according to ancient traditions live here. The village of Gamsutl will amaze with its cinematic abandonment. The last resident of this village died in 2015. Complete the tour of the villages in Balkhara, whose inhabitants create unique clay toys and pots.