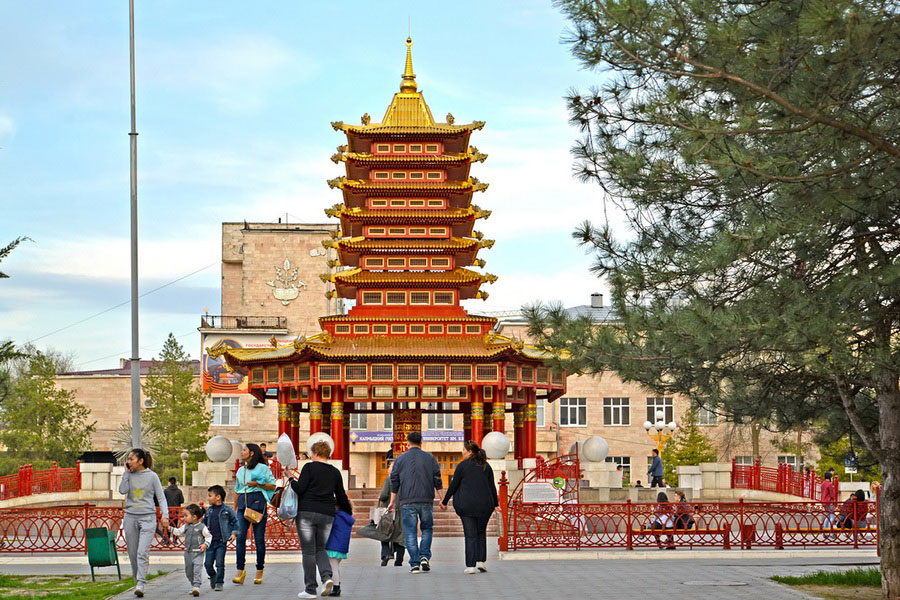 Tours, Attractions and Things To Do in Elista

Elista, Russia is the official capital of the Kalmyk Republic (Kalmykia), better known as the Buddhist capital of the country. A pearl of the steppes, Elista often takes tourists in this Orthodox nation by surprise with its large collection of Buddhist statues and exotic pagodas which defy the norm of Russia’s cathedrals, kremlins, monasteries and merchants’ mansions. Travelers wishing to step into the Far East while touring the country need look no further than Elista, which serves as just one more example of the vastness and diversity of Russia.

The history of Elista is indirectly connected with the name of Emperor Nicholas I, who in 1845 issued a decree that the Kalmyk Steppe be turned into forest plantations. Centuries prior, nomadic Kalmyk tribes had settled in the valleys of Elista and over time, a colony of workers engaged in reforestation had formed on the steppe. A former Russian serf by the name of Stepan Prokopyevich Kiikov is regarded as Elista’s founder after he laid the foundations of the city in 1862. Three years later the village consisted of 15 households, and thus 1865 is recorded as the year in which Elista was officially founded.

The name of the city is derived from the word elsta, meaning "sandy" in Kalmyk, for the land has long been known for its dry, sandy soil. In 1927 Elista became the capital of Kalmyk Region, and in 1930 it attained the status of city when it was united with a newly built town of the same name.

World War II brought tragedy to Elista when the city was nearly burned to the ground and its inhabitants deported. It was renamed Stepnoy but sat desolate for the next 13 years. City revival finally occurred in 1957 when railway tracks were laid and a hospital, school, residential buildings and factories were built. By the end of the 20th century, Elista was again a flourishing city filled with unique monuments and noteworthy architectural structures.

Elista is rich in unusual tourist attractions. Guests will first be welcomed by Dzhangar the Golden Horseman, the hero of a Kalmyk epic who towers on a huge pedestal and can be seen at least a dozen kilometers before reaching the city limits.

Buddhism is the primary religion of the people of Elista, a fact keenly portrayed through the city’s numerous religious monuments. In the central square of Elista is Pagoda of Seven Days, a vivid example of Buddhist architecture which was built according to Eastern philosophy. The seven levels of the building symbolize the seven days of the week, while the pointed spire is symbolic of the exit from this world and the attainment of nirvana. The prayer drum was donated by the lamas of Gyumad Tantric Monastery in India and contain about 75 million mantra scrolls.

Golden Abode of Buddha Shakyamuni is the main complex of Kalmyk Republic and the largest Buddhist temple in Russia. Built according to Tibetan tradition and striking in appearance, the complex was built in 2005 and consecrated in the presence of the Dalai Lama. Inside the temple is an eleven-meter-tall white marble statue of Buddha, while on the temple grounds are pagodas with prayer drums.

Elista also has sights which are not related to Buddhism, most notably Kazan Cathedral, the main Orthodox church in the city. Built in recent days, the cathedral is famous for its miraculous icons. Also of interest to tourists is St. Sergius of Radonezh Orthodox Church in which the relics of the Holy Martyr Thaddeus are kept.

It is impossible to miss the huge black-and-white granite chessboard in the central square of Elista at which passersby are invited to play. You may have to wait in line, though, as chess is a popular pastime with local residents young and old.

The most heart-wrenching monument in Elista is Exodus and Return Memorial, created in memory of the deportation of the Kalmyks in 1943 and their eventual return to their native land. Consisting of a carriage on rails and a black sculpture with intertwined human bodies, the monument truly captures the harsh realities experienced by the Kalmyks during deportation.

For an insider’s view of modern Elista, a visit to Chess City is a must. Built to host the 1998 World Chess Olympiad, the complex includes many beautiful two-story cottages with thematic names such as Queen and Rook. Chess tournaments and international exhibitions are regularly hosted inside Chess Palace, the town’s main building, on the lawn of which is a park filled with chess sculptures. Nearby is the beautiful Stupa of Enlightenment, one of the most famous sites of the city known for its Buddhist relics and atmosphere of harmony. A statue of the main character from the film “12 Chairs” is located on Ostap Bender Avenue, the main street of the city. To leisurely enjoy Elista’s Chess City, we recommend strolling the fanciful town on foot.

Elista is an extremely creative city, as evidenced by the many jazz, theater, culinary, sports, film and other festivals which are staged here throughout the year. Tourists can even take a piece of Elista’s creativity home with them by purchasing locally-made souvenirs, the most popular of which are clothing made from camel’s wool and various felt products, including special yurt-shaped boxes.

The unusual combination of Buddhis shrines, sprawling steppe, ancient epics and modern heroes in Elista, Russia never fails to surprise and delight first-time visitors to the heart of the Kalmyk Republic.