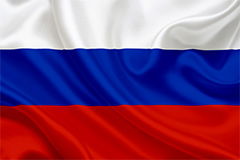 The flag of the Russian Federation is a rectangular cloth of three equal horizontal stripes: upper - white, middle - blue and lower - red. The ratio of the width of the flag to its length is 2:3.

For the first time the white-blue-red flag was raised on the first Russian military ship the «Eagle» by Peter I's father Aleksei Mikhailovich. Peter I is considered the legal father of the tricolor. On January 20, 1705 he issued a decree according to which «the trading vessels of all types» had to raise the white-blue-red flag; he himself outlined the model and determined the order of horizontal stripes.

The three colores of the flag, which became a national symbol, received official interpretation. The red means «statehood», the blue is the color of the Virgin Mary who is Russia's protector, the white is the color of freedom and independence. These colors also meant the commonwealth of White, Little and Great Russias.

At present, most often unofficially, the interpretation of the flag colors of Russia are as follows: the color white means peace, purity, perfection, the blue is the color of faith and fidelity, constancy; the color red symbolizes energy, strength, blood shed for the Fatherland.