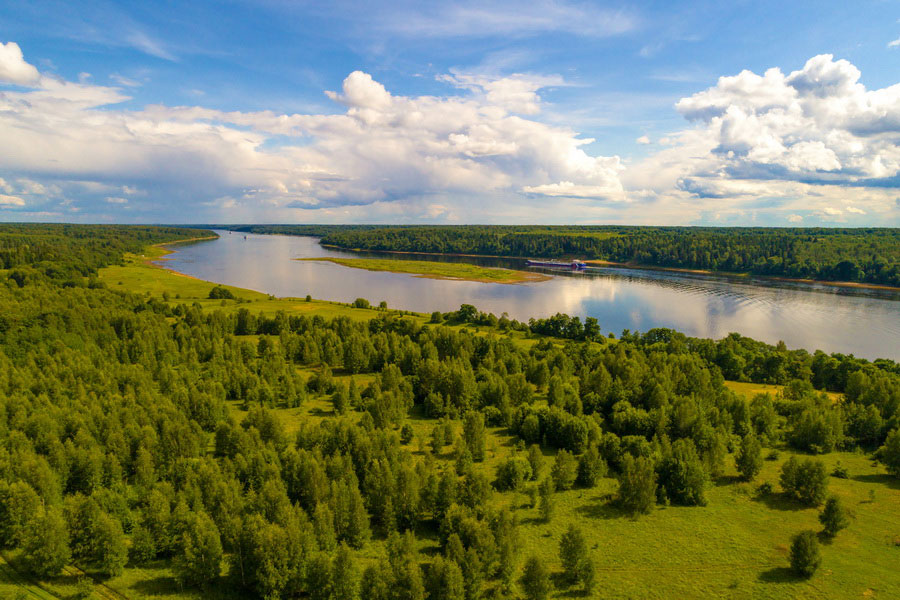 Russia is the largest country on earth. Its territory covers nearly 1 / 6 part of the land, and occupies about a half of the world's largest continent, Eurasia, located on two of its constituents - Eastern Europe and Northern Asia.

The length of the country’s land borders is 20,322 kilometers, maritime boundaries - about 38,000 kilometers.

All in all 11 hours lie between its two ends - Chukotka and Kaliningrad Oblast. The northernmost point on the mainland is Cape Сhelyuskin (Taimyr Peninsula), on the islands – northern part of Rudolph in the archipelago of Franz Josef Land; the southernmost - in Dagestan on the border with Azerbaijan; westernmost - on the Baltic Spit in the Kaliningrad (Vistula) Lagoon, easternmost - on Ratmanov Island in the Bering Strait.

Russia is washed by the seas of three oceans – the Atlantic, the Arctic and the Pacific. Russia has a large number of islands: in the Arctic Ocean - Franz Josef Land (archipelago of almost 100 islands), the island of Novaya Zemlya, Vaigach, a group of islands known as the Severnaya Zemlya, New Siberian Islands, Wrangel Island; in the Pacific Ocean - the Kuril Islands, stretching from Kamchatka to Japan, and Sakhalin.

Russia can be divided into three broad regions: European Russia, which occupies the territory west of the Ural Mountains; Siberia, stretching from the Urals almost to the Pacific Coast and Russian Far East.

Flora and fauna of Russia varies depending on the natural zones located on its vast territory. There you can find everything: from arctic deserts lichens to lush subtropical vegetation of Caucasus.