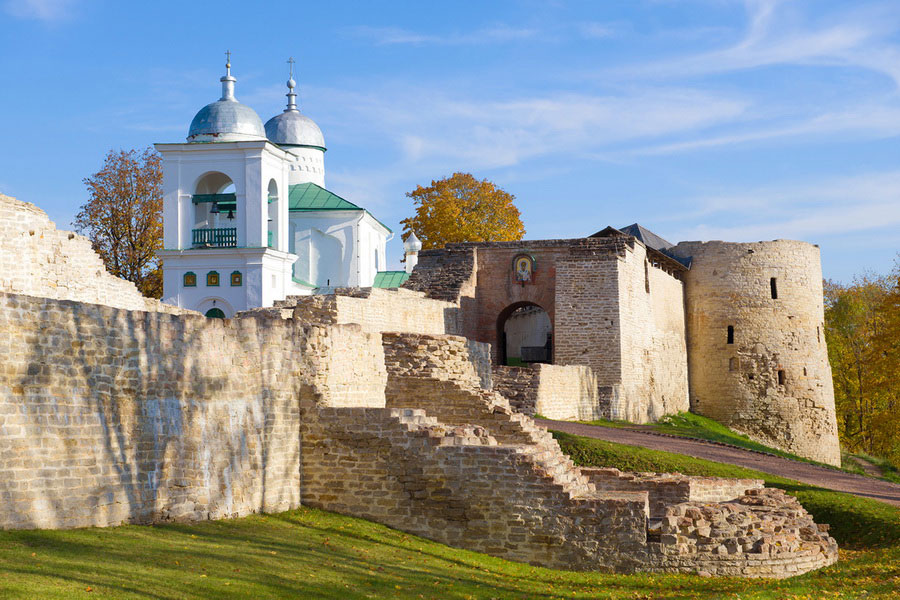 Tours, Attractions and Things To Do in Izborsk

Izborsk, Russia is one of the most ancient cities in the country. Older even than the neighboring historic city of Pskov, it was founded in the 7th century around the same time as Veliky Novgorod and today offers natural and manmade attractions which testify to its ancient roots.

Old Izborsk, which was inhabited from the 7th-18th centuries, is located ten kilometers from modern Izborsk and thirty kilometers from Pskov in Russia’s Pechora Region. Its history began when the adjacent Truvor Settlement was founded. Named after one of the first princes in Russia, the name “Truvor” can be interpreted either as “third in the family" or "with a faithful squad." According to legend, three brothers – Truvor, Sineus and Rurik- arrived to the territory in 862. Sometime after Truvor founded his namesake settlement, he and Sineus died, while the surviving brother Rurik went on to found the Rurik Dynasty.

In the 1780s, Catherine II ordered the production of a series of medals on which the history of Russia as she interpreted it was illustrated. The first medal bears a fictitious portrait of Rurik on the front and an inscription on the back which reads "In Memory of This Day", and "Truvor Died in Izborsk in 864".

In the cemetery near Old Izborsk, ancient stone slabs have been preserved on which crosses carved with symbols once stood. One of these 15th century crosses survived and has been named Truvor's cross. Locals believe that it is the center of the earth’s energy, and some even claim that one side of the cross is charged with positive energy and the other with negative energy.

Izborsk Fortress on Mount Zherav’ya is a unique 14th-century fortification and the main attraction of the city, for many regard this strategically significant site as the birthplace of the town. Over time, the original wooden fortress was replaced with one made of stone which was able to withstand numerous attacks by the Germans, Poles and Lithuanians. Izborsk Fortress now measures 850 meters in length, almost 3 meters in width and nearly 3 meters in height and occupies an area of 2.5 hectares.

Izborsk Fortress includes six towers: Kolokolnaya Tower, opposite which is the magnificent 14th-century St. Nicholas Cathedral; Lukovka Tower, which was built inside the walls and gives the impression of a fortress within a fortress; Talav Tower, also called Ploskushka; Ryabinovka and Temnushka Towers; and the highest and most powerful of all, Vyshka Tower.

In the 1960s, attempts were made to restore the fortress, yet the renovations were left unfinished and only partially completed in 2010. In recent times, an observation deck was added to Lukovka Tower and St. Nicholas Cathedral was restored.

Near the walls of Izborsk Fortress is one of the main natural attractions of all Pskov Region – Slovensky Springs, also called "Springs of the Twelve Apostles". In total, twelve small springs with a high mineral content gush out of the rock. Estimated to be 1000 years old, the gorgeous springs are considered miraculous and full of healing properties, and thus surrounded in myth and legend. It is said that each of the twelve springs has a special effect on a person. One spring brings wealth, another wisdom, health, patience, love, etc. There is even one spring called “Maiden's Tears”. We recommend trying them all, as everyone has their favorite. The water never freezes, but there is a belief that it will dry up on the eve of tragic events, such as it supposedly did just before World War II.

Pilgrims and tourists come here year-round to admire the springs and collect the water, which is consecrated every year during the spring celebration of the Icon of the Mother of God of the Life-Giving Spring.

Izborsk State Museum-Reserve of History, Architecture and Land contains artifacts found in the Izborsko-Malskaya Valley and nearly 200 monuments of historical and cultural value, more than 20 of which have been granted federal protection.

The modest and serene Truvor Settlement dates to the 8th century and offers magnificent views of nearby lakes.

Expand your understanding of the region by visiting the Museum Quarter, which opened in 2012. Expositions are displayed in former merchant houses which allow you to visualize the life of a 19th-century trader in the village. Nearby is Blinnaya Museum Café, where you can dine in a recreated peasant hut complete with an old Russian stove.