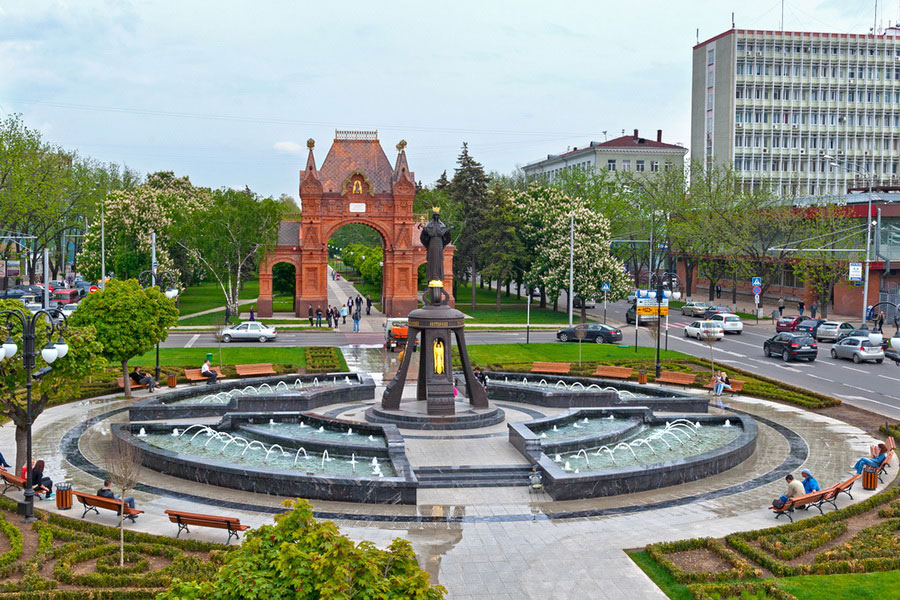 Tours, Attractions and Things To Do in Krasnodar

Here we are in the South of Russia. Welcome to Krasnodar, a major economic and cultural center of North Caucasus, also called “the capital of Kuban”. Krasnodar, perhaps, is one of the most interesting resort towns of the Russian Federation. It is a relatively young city founded by the Cossacks in в 1793 on the lands granted by Ekaterina II (hence its former name was Ekaterinodar). Later, when the Soviet system rose to power, the city was re-named to Krasnodar in 1920, and it preserved this name up to date.

Krasnodar is a center of the Russia’s southern touristic zone, located of the right bank of the Kuban River, 120-150 km from two warm seas – the Black and the Azov. It is an interesting fact that the city is located in the golden section of the Earth, almost in between the equator and the North Pole, right on the 45th parallel, also called “the Golden Line” or “the Life Line”. There exists an opinion that the living conditions in these latitudes are most favorable for human.

In spite of the city’s “youth” Krasnodar has many historical landmarks, while its architectural look is various and represented by different styles from Baroque and Classicism to late Modern. In Krasnodar, there is one of the largest Russian churches – Saint Catherine’s Cathedral, built as early as in 1914 and survived by a miracle under the Soviet power. It is also worth while visiting the Krasnodar main Orthodox Church – Alexander Nevsky Cathedral. Interesting and dramatic, was the fate of this, one of the Russia’s most beautiful churches, an example of Russian and Byzantine templar style. Alexander Nevsky Military Cathedral was erected in April 1853, but later on, in year 1932 it was blown up by the Communists. And it was not until May 2006 when the inauguration ceremony of Alexander Nevsky Cathedral built anew took place.

Nowadays the Krasnodar architectural variety combines the harmony of old and modern structures. Now, next to the churches there are also modern high-rise buildings (the Marriott Hotel”), shopping and entertainment centers (“Red Square”), modern concert halls (Palace of Arts “Premiere”), restaurants, and night clubs. The city also strikes with its numerous museums, theaters, art galleries. Particularly, if you find yourself in Krasnodar, we recommend you to visit the Krasnodar Regional Art Museum named after F. A. Kovalenko to enjoy a rare collection of Russian avant-garde and Dutch art of XVI century, and also attend concerts of SSAI “Kuban Cossack chorus” to listen to Kuban Cossack, Russian and Ukrainian folk-songs.

Two Krasnodar unusual landmarks enjoy wide popularity among tourists and local community: the Monument to a purse and the Monument to the doggies in love. Do you want to turn round? Then you are to the purse. It is enough to rub your purse over it, and you will have more money. But if you are unlucky in love, then the loving couple of dogs will help you, you should stroke their small paws and love will certainly come to you.