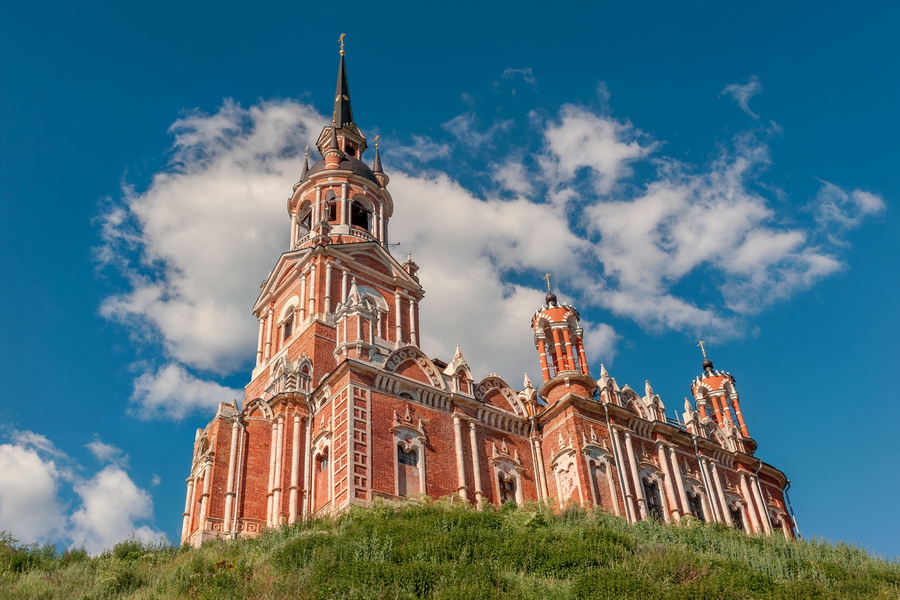 Tours, Attractions and Things To Do in Mozhaysk

Just 110 kilometers from Russia’s capital is Mozhaysk, one of the most picturesque cities in Moscow Region. The city was named after the Mozhaika River, which in Lithuanian means "small".

Mozhaysk (also spelled Mozhaisk) is famous as the site of the 1812 Battle of Borodino. It is also known for its idyllic nature, including Mozhaysk Sea. Thanks to its rich cultural heritage, Mozhaysk has been classified as a valued historical settlement of Moscow Region.

The first settlement on the territory of modern Mozhaysk was founded in the 11th-12th centuries, as is evidenced by archaeological finds of jewelry and weapons fragments which are dated to that era. Mozhaysk was first mentioned in writing in 1231, and by the 16th century was a major center of trade and handicrafts.

In 1812 the Battle of Borodino was fought in the village of Borodino, located 12 kilometers from Mozhaysk. The event is now famous as the largest battle between the Russian army under Prince Mikhail Kutuzov and the French under Napoleon. More recently, Mozhaysk was awarded the honorary title of City of Military Glory for the bravery of its inhabitants during World War II.

The main attraction of Mozhaysk is the State Borodino War and History Museum-Reserve, located on the original Borodino battlefield for which Mozhaysk is famous. The first monument to honor the many who fought in the battle and the soldiers who served in the Russian army was commemorated in 1839 by Emperor Nicholas I. The ashes of the battle’s hero, Grand Duke General Pyotr Bagration, are buried at the base of the monument.

That same year Emperor Nicholas ordered a gatehouse for war veterans be built on site. It was veterans themselves who cared for the monument and Bagration’s grave, kept a record of visitors and showed guests the original battle plan and various findings from the battlefield. To accommodate important guests a two-story estate was built next to the field, which over time was filled with war items. From the mid-19th to the early 20th centuries the museum was regularly replenished with new exhibits.

Many monuments were destroyed by the Germans during World War II, and in order to preserve the museum some of its exhibits were evacuated and later returned. Borodino Field was declared a museum-reserve in 1961, and in the mid-1990s the area was expanded to include a total of 645 square kilometers. Today the exhibitions of State Borodino War and History Museum-Reserve include hundreds of items related to the historic battle - maps, documents, military uniforms, weapons, flags, awards, personal belongings, paintings depicting the battle and findings from the field including bullets, cannonballs and grenade fragments. In warm weather battle reenactments and other historical events are held on Borodino Field.

Also located on Borodino Field is Spaso-Borodinsky Convent. It was founded by Margarita Tuchkova, who in 1820 built Church of the Savior Not Made by Hands on the site where her husband, who fought in the Battle of Borodino, passed away. In 1838 the church, then home to many nuns, was renamed Spaso-Borodinsky Convent. Margarita Tuchkova herself took monastic vows under the name Maria and became the abbess of the convent.

Since Mozhaysk served as a key defensive front for Moscow in World War II, the city also has several memorials dedicated to fallen soldiers from this era.

Mozhaysk Kremlin, located on a hill from which the whole city is visible, is the pride of the town. Based on old chronicles it is known that the fortress, which existed by the 12th century, was a defensive post. Today only the stone bridge, part of a gate and gate church, fragments of walls and an earthen rampart remain. The 18th-century St. Nicholas Cathedral and the reconstructed 14th-century Church of Peter and Paul are also located on the territory.

Luzhetsky Ferapontov Monastery, founded in the early 15th century, is among the oldest sites in Mozhaysk. The ensemble includes the 16th-century Cathedral of the Nativity of the Most Holy Theotokos, several churches, a bell tower and monastic cells. The foundation of Ferapontov Church has also been preserved, under which the founder of the monastery, Ferapont Belozersky, is buried. In 1547 Belozersky was canonized by the church. The relics of St. Ferapont are located in Theotokos-Nativity Cathedral. Not far from the monastery is a healing spring associated with St. Ferapont into which visitors can take a dip.

Mozhaysk Museum of History and Local Lore, opened in 1905 by Countess Praskovya Uvarova as a small collection of visual aids for students, later developed into a regional history museum. The exhibits now include items which belonged to the Uvarovs as well as other historical and household objects and paintings by local artists.

Artists will appreciate Sergei Gerasimov House-Museum, which is part of Mozhaysk Museum of History and Local Lore. Gerasimov lived in this house for 49 years while he created masterpieces in the Russian Impressionism, Surrealism and Cubism styles. This small two-story mansion houses the talented artist’s personal belongings and some 400 of his works. Particularly impressive are the landscapes depicting the beauties of Mozhaysk nature.

Mozhaysk Reservoir, also known as Mozhaysk Sea, is located five kilometers from the city. The townspeople acquired their own sea after a dam was built on Moskva River in 1960-1962. Today the reservoir is loved by all for its fishing spots, beach and water sports. As Mozhaysk District is one of the most ecologically clean areas in Moscow Region, there are many health resorts, recreation areas and children's camps nearby. For independent recreation you can rent a comfortable house or bring your own tent.

The highest point of Moscow Region - the 310-meter-high Zamri Mountain - is located near Mozhaysk. Legend has it that when bonfires were lit and rituals performed here on Ivan Kupala Day (July 7) a silver mask was taken out of hiding which helped to fulfill the wishes of those who were present.

Travelers wishing to be in nature can also head to the source of the Moskva River. Called Moskvoretskaya Puddle, it is a small stream flowing out of Starkovsky Lake in the village of Drovnino.

Just under 40 kilometers from Mozhaysk, in Porechye village, is a folk museum of traditional culture where clothes, toys, jewelry, handicrafts and paintings by little-known artists are on display. The village also attracts tourists with its 18th-century Razumovsky-Uvarovy Estate. (It is believed that the founder of this dynasty, Alexei Razumovsky, was the secret husband of Empress Elizabeth Petrovna). The home later passed into the hands of the Uvarovs, descendants of Razumovsky's daughter. The many household items of the Uvarovs became the basis of a museum whose exhibits were later transferred to Mozhaysk Museum of History and Local Lore. Unfortunately, in 1920 most of the original collection was destroyed in a fire.

History buffs will not want to miss Goretovo Estate near Mozhaysk. The manor was owned in the 18th century by the Mussin-Pushkin noblemen and was later home to the exiled Count Alexey Bestuzhev. In the mid-19th century a paper weaving factory opened in the building. Today the territory includes Bestuzhev Boarding House, the 18th-century Trinity Church, a park and a small two-story wing dated to the early 19th century.

In lieu of run-of-the-mill magnets depicting the city, we recommend souvenirs from Borodino Battlefield such as soldier figurines, copies of artillery shells, military clothing and commemorative coins. Borodino bread, rumored to have first been baked by the nuns of Spaso-Borodino Monastery, is also very popular.