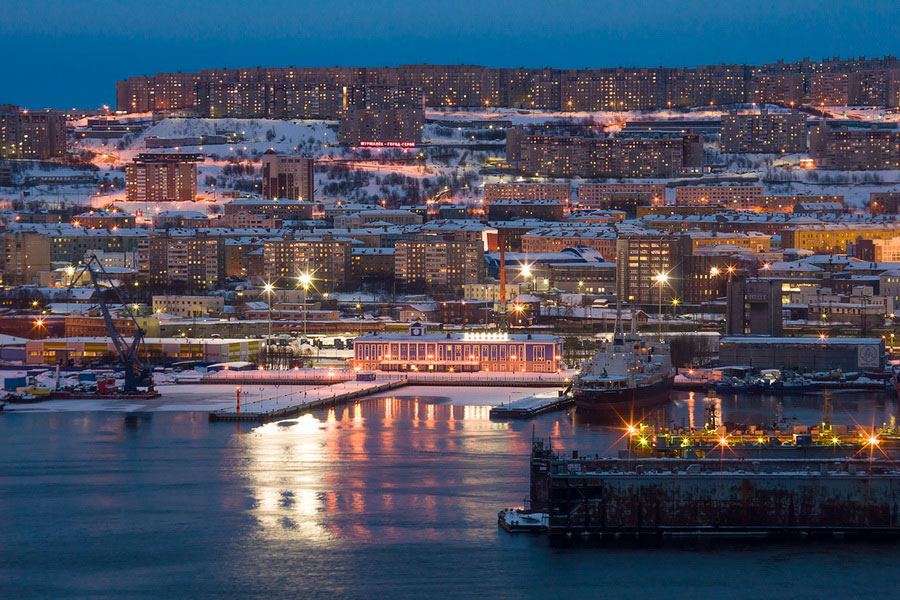 Tours, Attractions and Things To Do in Murmansk

Murmansk, Russia beckons adventurous travelers to discover its arctic culture and unusual history firsthand. Nicknamed the "Gateway to the Arctic", it is the largest city north of the Arctic Circle and a major launching point for commercial ships, fishing vessels and arctic expeditions. Murmansk is also a Hero City, a title of great honor given to select communities in Russia after World War II. A young city with a history of little more than 100 years, Murmansk has already experienced four wars but has remarkably never been conquered.

The city’s evolution from fledgling outpost to thriving city in the span of a century is fascinating in itself, yet it is the frigid arctic climate of Murmansk, Russia which continues to set it apart. Subzero temperatures and weeks of winter darkness are tempered with extraordinary natural wonders and an adaptable, almost magical culture that dictates everyday life in Murmansk while enticing visitors to experience the remote side of Russia.

The construction of a much-needed city beyond the Arctic Circle was discussed in the Russian Empire back in the 1870s. Scientific research began on the Kola Peninsula in 1912, and three years later a port was founded on the Barents Sea, next to which a small village was built and named after nearby Lake Semyonovskoye. At the same time, a railway line leading from Petrozavodsk to the Kola Peninsula was hastily constructed. The opening of the port at this northern point was very strategic, for at that time Russia was embroiled in World War I and the Baltic and Black Seas were essentially blocked. Thanks to the new port, the Russian Empire was still able to receive essential cargo from allied nations.

City status was granted to the new settlement on October 4, 1916. On the same day, St. Nicholas Cathedral was consecrated in honor of Nicholas the Wonderworker, the patron saint of seafarers who is canonized in the church. Initially called Romanov-na-Murmane, the name was changed to Murmansk after the February Revolution in 1917. During the turbulent events of 1917-1920, power in the city passed violently from the Bolsheviks to the White Guard. In February 1920, the Soviets finally took firm control of Murmansk, which by this time lay in ruins with only 2500 inhabitants.

The city was revived in the years leading up to World War II, and in 1933 it became the base for the Northern Fleet. At the Murmansk port, Russia received cargo and goods for a new mining and metallurgical plant in Norilsk which was then being built. The city’s fishing industry also developed to the extent that Murmansk began exporting fish to other cities. Gradually, multi-story brick buildings, paved streets and urban transport transformed the city from a struggling outpost to a successful regional center, and by the start of World War II the number of residents had reached 120,000.

During World War II, a German army of 150,000 troops stationed in the Arctic tried several times to storm Murmansk by land and air. Bombing raids caused fires which nearly decimated the town, with the threat of further attacks lingering over Murmansk until 1944. The city’s resiliency under these assaults prompted government officials to award Murmansk with the title of Hero City after the war finally came to an end.

Murmansk bounced back remarkably fast in the aftermath of the war, largely because the restoration of this port city was strategically important for the Soviets. By the 1950s, Murmansk’s population had returned to its pre-war count and it continued to grow in the coming decades through the addition of new neighborhoods and a steadily increasing population. Today, the economy of Murmansk is reliant upon fishing, fish processing, marine vessel repair, metal processing, marine geology and geological exploration.

Tourism in Murmansk, Russia revolves largely around its arctic climate, for what the city lacks in history it compensates for with unusual natural phenomena and memorable holidays that celebrate its arctic culture.

Since Murmansk does not have a historical center, most of its attractions are concentrated near Five Corners Square, a harmonious ensemble built in the latter half of the 20th century. Scattered throughout the city are monuments dedicated to military heroes, including Monument to Anatoly Bredov (Soviet military leader), Victims of the Intervention of 1918-1920 Memorial, Arctic Convoys Memorial, Monument to the Icebreaker “Ermak” and Memorial to the Defenders of the Soviet Arctic. Church of Tryphon of Pechenga (Pechenga Monastery) and St. Nicholas Cathedral are notable among Murmansk’s historical-religious landmarks.

Murmansk has more than 20 institutes of higher education, making it the largest educational center in Northern Russia. The city is also known for its many unique museums, including Naval Museum of the Northern Fleet, Museum of the History of the Murmansk Shipping Company and Lenin Nuclear Icebreaker Museum.

From the city of Murmansk you can witness the Northern Lights, polar nights and parhelion, all unusual natural phenomena which are only visible in extreme northern latitudes.

Polar night, during which the sun never rises above the horizon, lasts from December 2nd to January 10th in Murmansk Region. Another rare phenomenon which can be viewed here during winter is parhelion, the refraction of sunlight in floating ice crystals which gives the illusion of 2-5 bright light sources in the sky.

The Northern Lights in Murmansk are so spectacular that some tourists visit the region specifically to enjoy these mind-blowing light performances which play across the sky. During a display of the Northern Lights, which may be seen in Murmansk from the beginning of September to around mid-April, the dark, star-studded sky is suddenly alight with bright flashes of green, turquoise, blue, pink, yellow and purple. These bright waves of light move dynamically across the sky before vanishing as suddenly as they appeared.

The Northern Lights in Murmansk are definitely worth seeing, although they are not visible every day. As the lights usually make their appearance when an anticyclone is active, check the forecast before you fly so as to align your travels with the approach of a magnetic storm, which will almost guarantee you a front-row seat for this phenomenal lights show!

Almost every month in Murmansk is marked by a lively holiday or festival ranging from the traditional to the truly unusual. Many of these regional festivals revolve around the arctic culture which developed in response to the frigid Murmansk weather, and some are now recognized nationally for their cultural significance. When visiting Murmansk, consider timing your travels with one of these eclectic celebrations:

Snegoled Festival is a jaw-dropping ice sculpture carnival held annually at the end of January. At Snegoled, hundreds of huge sculptures crafted from snow and ice by skilled artists can be seen in the frosty white expanse of the Arctic. Each life-size creation is wholly unique and only appears once to the world before melting in the months to come. Sculptures range from the ordinary to the fantastical, while special interactive exhibits and master classes make for a truly magical experience.

Festival of the North, unofficially known as "Polar Olympiad", is a winter sports competition which is held annually from late March to early April. Both professional athletes and amateurs can compete in cross-country skiing and shooting, downhill slalom, rock climbing, winter kiting, windsurfing and even winter swimming. For those wishing to participate in a truly unusual sport, football in the snow and ice fishing are also offered.

First Dawn is dedicated to the first sunrise in Murmansk after the polar night, which strangely takes place not in the morning but during the day between 11am and 2pm. This event was held for the first time on January 12, 2020, and the organizers now plan to make it an annual tradition.

Pomeranian Kozulya Festival is held every year in early August in Kuzreka village of Murmansk Region. Kozulya is a traditional cookie made from rye dough that has been baked in these northern lands since the 12th century. Each delicate treat is shaped to resemble deer and other arctic animals before being beautifully decorated with icing. Time your visit to Murmansk, Russia to attend the Pomeranian Kozulya Festival and you will enjoy an authentic village fair, special exhibitions, master classes, tea tastings and plenty of tasty cookies.