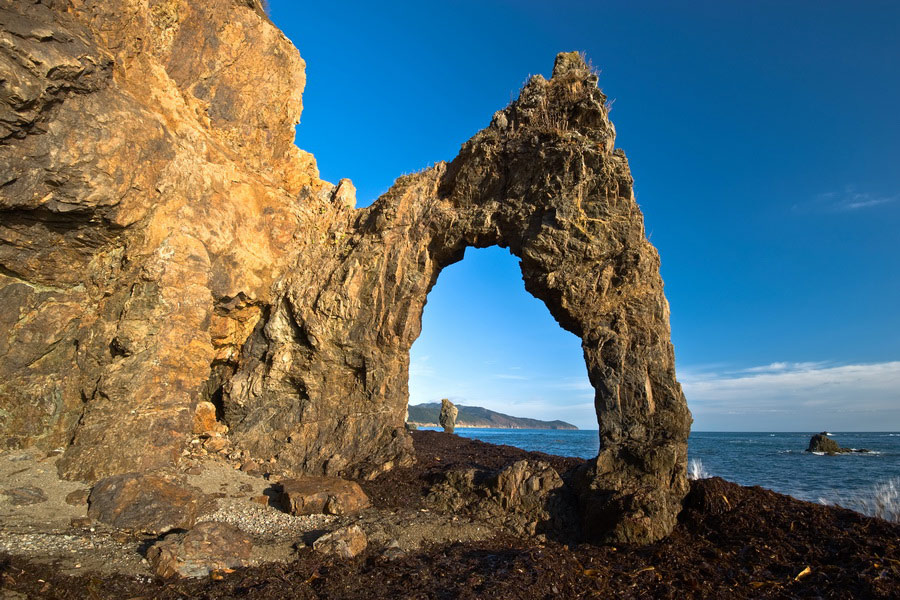 Tours, Attractions and Things To Do in Sakhalin

Sakhalin is the largest island of the Russian Federation. It is located in the Pacific Ocean and is famous for seafood and picturesque places. And in the Sakhalin region there is the cutest island in the world - Tuleniy, a favorite place of seals and fur seals.

Scientists confirm that the island was completely inhabited already 2.5 thousand years ago. People led a settled lifestyle and fished.

The first mention of Sakhalin dates back to 1640. At the same time, Russian Cossacks came here for the first time.

In 1855, the Treaty of Shimoda recognized Sakhalin as a joint possession of Japan and the Russian Empire. But already in 1875 Sakhalin was ceded to Russia, which, in turn, gave part of the Kuril Islands to Japan.

In the XIX century Sakhalin was a place of exile.

The largest city on the island is Yuzhno-Sakhalinsk. It was founded in 1882.

About half a million people live on Sakhalin. 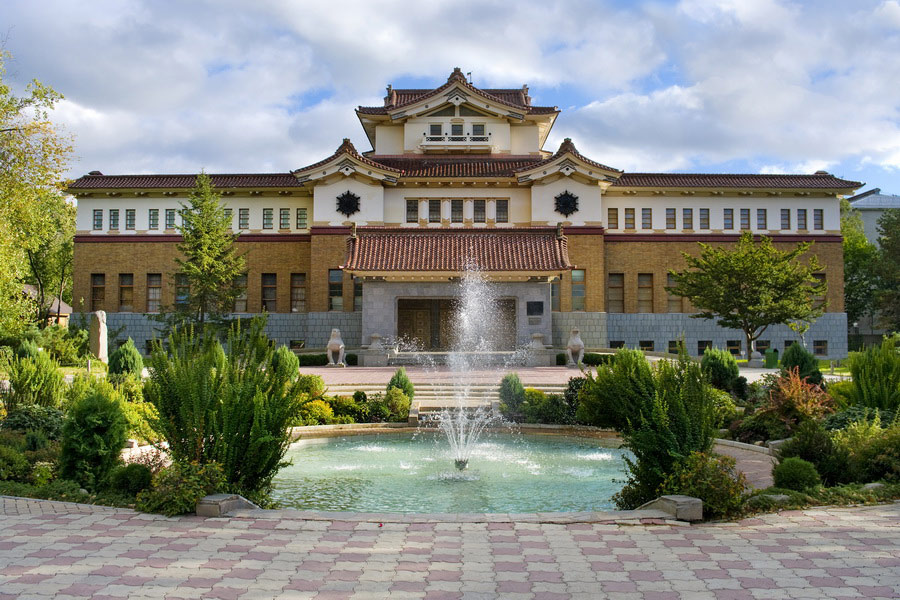 The Sakhalin State Regional Museum of Local Lore is located in a building that was built in 1937 in the teikan-zukuri style designed by a Japanese architect. Here you will get acquainted with the times when Japan owned the island and see how people lived on Sakhalin: what they wore, what they ate, what they produced.

Also in Yuzhno-Sakhalinsk there is a museum of railway equipment, the Sakhalin Regional Art Museum, the Chekhov Museum, the exhibition hall of the Union of Artists of Russia, the Bear Museum, geological and archaeological museums.

The Victory Museum and Memorial Complex is dedicated to the Russian-Japanese and World War II wars. This museum is different from the usual museums of this subject. Here you will learn about the Portsmouth Peace Treaty, about the fighting in the Far East and much more.

The Resurrection Cathedral of Yuzhno-Sakhalinsk is young, it was built in 1995. People come here to bow to the deceased leaders of the Sakhalin Region, headed by Governor Igor Farkhutdinov.

Tikhaya Bay is one of the most famous attractions of Sakhalin. It is so called because it is always quiet and peaceful here. This beautiful place will not leave anyone indifferent. Next to the bay is the Zhdanko ridge, which looks like a dragon.

Cape Giant is considered the most picturesque on Sakhalin. Nature has created columns, arches and peculiar sculptures here - stones that have been polished by water for centuries.

Cape Columnar is also very beautiful. After the eruption of the volcano, basalt pillars appeared here. They look so neat, as if they were created by man.

Take a look at Cape Crillon with its old lighthouse, weather station and border outpost.

The “Mountain Air” resort, located on Bolshevik Mountain, is considered the pride of the island. It is also recognized as the best in the Far East. If you come here in winter, be sure to ski or snowboard, if in summer - look at the city from a height of 600 meters. 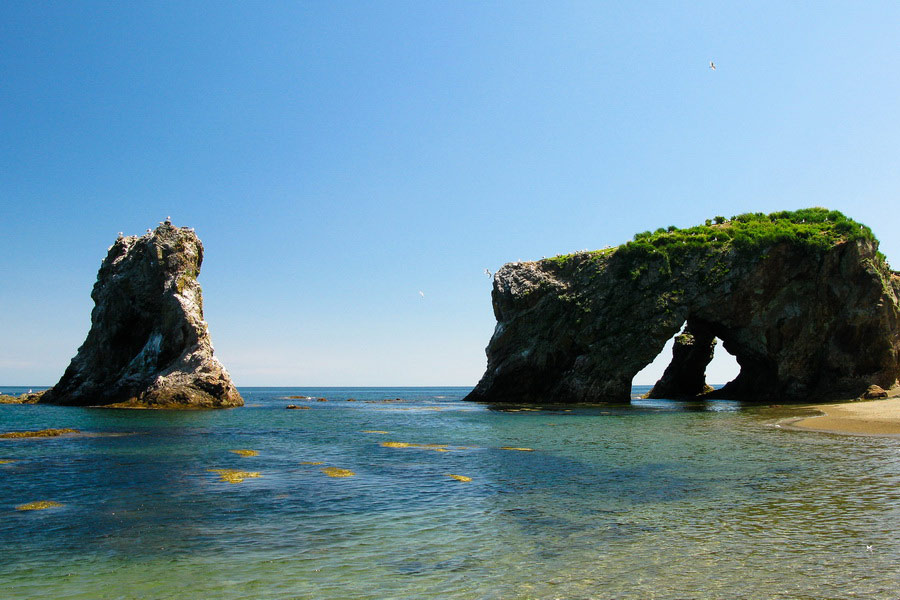 The “Vostochny” State Nature Reserve, which occupies 66 thousand hectares, is known for the dark coniferous taiga and animals that are listed in the Red Book. Please note that visiting the reserve is possible only after receiving a special pass.

If you love mountains, then climb Chekhov Peak. It's not difficult to reach the top, and the stunning views will more than pay for a two-hour climb. Also go to the mountain called Frog. It is so named because the outlines of one of the mountain ranges resemble a sitting frog. Once this place was considered a temple of wisdom and a place of power. Do not ignore the Ostraya Mountain. Tourists climb to the top to see the wreckage of the IL-114 plane, which crashed in 1976.

The lighthouse on Cape Slepikovsky, built by the Japanese, looks very picturesque. You can climb to a 28-meter height and take beautiful photos.

The 30-meter lighthouse at Cape Aniva was also built by the Japanese in the 1930s. In the 1990s, it was converted into a nuclear one, and now it is abandoned. You can get to the lighthouse only by sea.

The rocks of the Three Brothers will surprise you with their panorama. It is said that once three brothers stole the sorcerer's treasures, and for this he turned them into stones. By the way, Chekhov wrote about these rocks.

The beaches in Okhotsk, Yablochny and Starodubsky will appeal to lovers of lazy recreation. For example, the beach near the village of Yablochnoye is considered one of the best on Sakhalin. There is fine sand and a warm sea. And on the beach of the village of Starodubskoye, you can find reddish Sakhalin amber.

Lake Busse is worth a visit, if only to collect oysters that appear on the shore at low tide. We also advise you to go to the lakes Gorachee, Kipyashee, Tunaycha and Vavay lakes, Bird waterfalls, Cheremshansky, Ilya Muromets and Klokovsky.

The port of Korsakov is one of the largest ports in the Far East. People come here to admire the panorama and see the big ships, because the port has the status of an international one.

The seaside thoriums of the Higashi Shirauda Jinzda Temple - the gate left over from the Shinto temple – is one of the most photographed points of Sakhalin. There are also remains of the Temple of the Sun on the island.

Pugachevsky mud volcano is not a classic volcano. It is a perfectly round clay desert with a diameter of 4 kilometers. There is a swamp around the perimeter. Every few years, the volcano spews thousands of tons of mud, and the fountain can reach 50 meters in height. Another mud volcano is located near the Novoderevenskoye station. There are several constantly bubbling craters here.

If active recreation is not enough, you can go to the caves of Mount Vida. Pay attention to the cave of Bear tragedies, it is considered the most interesting.

Moneron Island is very small, but very beautiful. There are amazing views here. You can only get here with an excursion group.

The Tuleniy island is one of the cutest islands of the Sakhalin region. Seals and sea lions (big-eared seals) like to lie on a small island with a length of 636 meters.

Dagin thermal springs are almost 60 hot springs that gush out of the ground at a rate of three liters per second. The springs are considered healing and attract the attention of not only tourists, but also local residents.

Sinegorsky mineral springs are located near Yuzhno-Sakhalinsk. They are famous for the fact that the water contains arsenic. This mineral water cures many diseases. Therefore, two health resorts were built on the springs, where people come not only from Russia.

Be sure to visit the Kuril Islands. The state Nature Reserve "Small Kuriles" includes the islands of Zeleny, Storozhevoy, Shikotan, Rifovy, Anuchin, Signalny, Polonsky and Tanfilyev. Here are the famous Tyatya volcano, the Kuril Reserve and much more.

What to bring from a trip to Sakhalin?

Take a bigger suitcase with you because you will not leave without gifts and souvenirs. Be sure to bring seafood from the trip: fish, caviar, Sakhalin crabs, seafood. Grab the national unts as well. Girls will love the jewelry of indigenous peoples. Music lovers will be pleased with the musical instrument harp. Also take syrup from a local berry called klopovka, chocolate with squid and algae and traditional amulets.